Qualcomm has unveiled its newest Snapdragon 805 chipset, an upgraded Snapdragon 800 chipset which features an Krait 450 quad-core CPU part as well as the brand new Adreno 420 GPU.

The Snapdragon 805 chipset features a quad-core CPU that will be based on the new and improved Krait 450 architecture. It can clock up to 2.5GHz and features memory bandwidth of 25.6GB/s. Of course, it is still a 32-bit processor so it looks like we will still wait a bit longer for Qualcomm to hop on the 64-bit train, currently exclusively held by Apple.

In addition to an improved CPU, the new Qualcomm Snapdragon 805 chipset also features a completely new Adreno 420 GPU which, according to Qualcomm, has 40 percent more processing power when compared to the Adreno 330. It has 4K display support as well as 4K video recording support, already seen on the Snapdragon 800 chipset.

Qualcomm also included a new Gobi 9x35 modem, which is based on a 20nm manufacturing process so it should be smaller, more power efficient and faster. It packs LTE Cat4 support, dual-band 802.11ac WiFi and features support for 4K video streaming via WiFi. It also packs a new dedicated camera processor, which should increase camera speed, provide much better image quality and has a gyro sensor for additional stabilization.

According to Qualcomm, the chip is ready for mass production and first devices are expected in the first half of the next year. We are quite sure that we will see some devices at CES in January next year as well as Mobile World Congress in February. 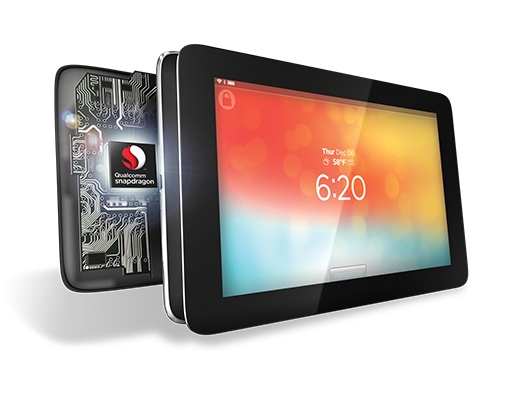