AMD is shedding more light on upcoming Beema and Mullins APUs. A lot of info on the upcoming SoCs has already leaked out, but now most of it is official, so let’s take a look at what AMD has in store for 2014.

Beema is the replacement for Kabini. It is based on Puma CPU cores and like its predecessor it features GCN graphics. In addition, AMD has added an ARM Cortex A5 core to boost security, hence it’s dubbed AMD Security Processor. The lowest TDP is 10W, quite a bit less than Kabini which started at 15W. However, AMD is now using Scenario Design Power (SDP) instead of TDP and we can’t say we’re thrilled with the decision to embrace what is essentially Intel’s marketing talk.

Beema should end up 20 to 25 percent faster than comparable Kabini parts. Much of the gain seems to be coming from higher clocks, as there’s nothing revolutionary about the GPU core, or the Puma CPU cores for that matter, as they are more or less updated Jaguar cores.

Mullins has a ~2W SDP and it will replace Temash, with an SDP of 3W to 4W. It features new Puma cores along with AMD’s Security Processor and its performance gains seem even more impressive. A 4.5W Mullins part should end up 35 percent faster than an 8W Temash in PCMark 8, with a 22 percent gain in 3D Mark 11. 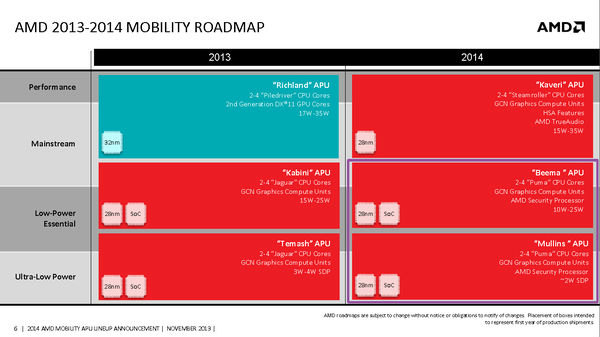 However, there are quite a few questions to be answered. First of all we are not sure where the performance gains are coming from. The process is the same, 28nm, but it’s possible that the tweaked Puma cores are simply a lot more efficient than Jaguar, delivering more performance while keeping the TDP (SDP) low.

The GPUs appear to be based on the exact same GCN cores and the performance gain can probably be attributed to higher clocks. Bear in mind that GPU clocks in most parts were clocked at 225MHz to 300MHz (Temash) and 400MHz to 600MHz on Kabini parts.

There is no word on Turbo Core support, either. Last time around only the A6-1450 Temash part featured Turbo Core. In fact, Turbo Core support may explain the relatively high performance boost on Beema and Mullins, but at this point we just don’t know enough to make any conclusions.

Rate this item
(0 votes)
Tagged under
More in this category: « AMD gaining x86 market share Cherry Trail-T to take on Mullins »
back to top