The Windows 8.1 launch didn’t get much attention, which probably has something to do with the fact that it’s basically Windows 8 done right. However, users of AMD APUs could have a good reason to celebrate.

According to AMD’s senior marketing manager Clarice Simmons, Windows 8.1 is a lot better than Windows 8 when it comes to harnessing the potential of AMD silicon. Writing in her blog, Simmons said the new OS could deliver performance gains of up to 9.5 percent on some PCs based on AMD APUs.

However, her numbers are for the A10-6800K and the 9.5 percent gain only applies to machines with an outdated video driver. With the same driver, the difference is actually 3.5 percent, which still isn’t bad but it’s not nearly as good as 9.5 percent. 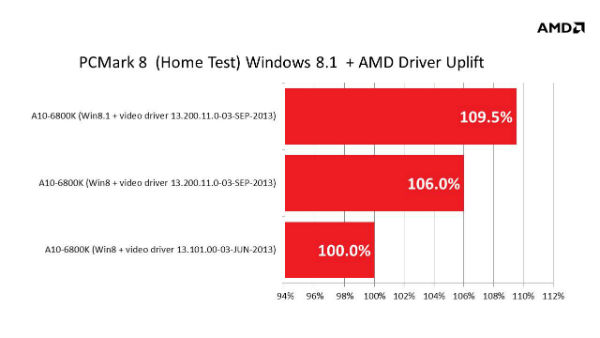 “Our work with Microsoft includes development on the essential operating system "plumbing" that enables Windows to directly leverage AMD technology in order to run more efficiently. The two companies also cooperate on the development and tuning of the latest AMD video drivers,"wrote Simmons.

"Of course AMD's fast CPU and GPU cores contribute to high performance, but having software that is optimized to take advantage of the AMD hardware architecture is a significant advantage. Tuning our device drivers to simultaneously suit AMD hardware, software applications, and Windows 8.1 makes systems more streamlined.”

Last modified on 22 October 2013
Rate this item
(0 votes)
Tagged under
More in this category: « MediaTek’s octa-core coming in November Nvidia talks up Android gaming, confirms Shield 2 »
back to top