At the end of his keynote Intel’s Hermann Eul, VP GM mobile communication group, mentioned what is to come in 2014.

He briefly mentioned the new Merrifield mobile phone chip, advanced LTE 7260 as well as Airmont, the next generation 14nm Atom. All these things are still in the future, but Intel wants to tell people that it can do 14nm next year, when the ARM alliance will barely be able to get to 22nm.

He didn’t go into any details, but he mentioned these things. He didn’t even say when Bay Trail starts shipping, but Niel Hand VP of tablet and performance PC at Dell said that they will announce a whole line of Bay Trail based devices later this year. We expect to see them shipping at the same time.

In 2014 all of a sudden both Intel and Nvidia have LTE, making them both more competitive against Qualcomm, who dominate this market, especially in the US. 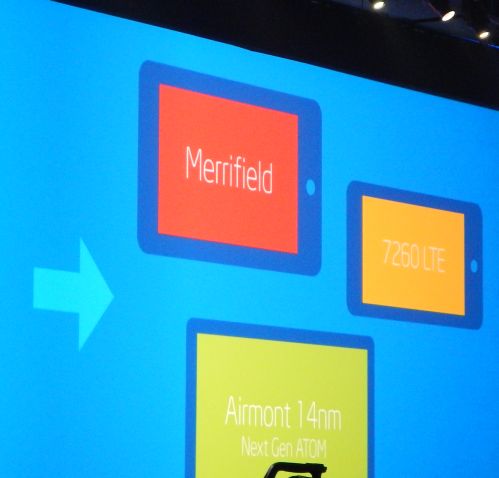