Roundup: Good enough for a "tick"


The wait is finally over and Intel officially released its 3rd generation Core processor family codenamed Ivy Bridge. Based on its 22nm manufacturing process and 3-D (tri-gate) Transistor technology, Intel's Ivy Bridge is still a tick and is based on an improved Sandy Bridge design.

For starters, Intel introduced no less than 14 quad-core models that will spread across the Core i5 and Core i7 series, while dual-core parts should come sometimes "later this spring". Based on its 22nm process, the transistor count was increased from 1.16 billion on Sandy Bridge up to 1.4 billion on Ivy Bridge while shrinking the die size to 160mm2 (216mm2 on Sandy Bridge).

As far as specs are concerned, the new Ivy Bridge features 256KB of L2 cache per core, up to 8MB of L3 cache, dual-channel DDR3 memory controller with support for DDR3-2800 and DDR3L 1.35V memory, PCI-Express controller with a total of 16 lanes (20 on the workstation side), and of course, a totally new IGP, the HD Graphics 4000. 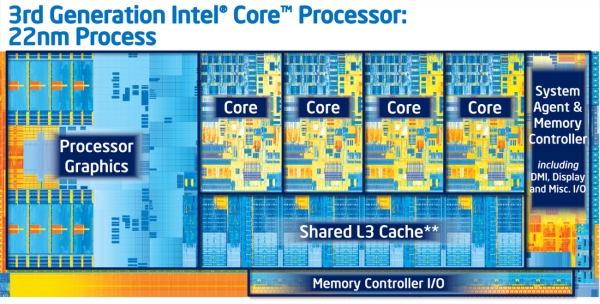 Intel's Ivy Bridge has been dominating headlines for quite some time and all that time, Intel was quite vigorous to claim that Ivy Bridge is more than a "tick", or as Intel liked to call it, tick+. The main improvement, in addition to the obvious 22nm shrink and actual power consumption/lower temperature benefits, is the HD Graphics 4000. The new IGP should bring, according to Intel, up to 60% increase in GPU performance and numerous other improvements. 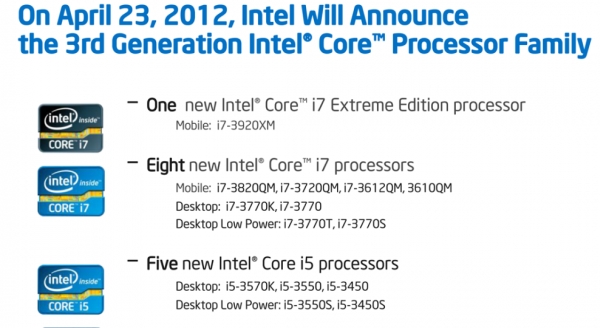 Most of the reviews online, at least when it comes to Intel's Core i7-3770K Ivy Bridge CPUs, pretty much come to the same conclusion that Ivy Bridge is pretty good, but still just a TICK. You get marginally higher CPU performance at a bit lower power consumption but also lower overclocking potential when compared to Sandy Bridge. As Anand pointed out in its review, Intel's Ivy Bridge "is quite possibly the strongest tick it has ever put forth".

Ivy Bridge IGP is definitely a step in the right direction and can be considered as a glimpse of what Haswell might bring, at least in terms of IGP performance. Although it does not have a big influence in the desktop part of the market, the new IGP will certainly have an impact in the mobile market.

The new 7-series chipset finally brings USB 3.0 support as well as Thunderbolt support (at a later date). The bottom line is that if you missed the last year's upgrade, Ivy Bridge certainly has its appeal with slightly higher performance and lower TDP, but those with Sandy Bridge will certainly be disappointed.