The list of performance improvements over the TI OMAP4430 is quite impressive as TI claims that this one will have a 1.25x increase in graphics performance, a 30 percent decrease in webpage loading time and 2x increase in 1080p video playback performance. The noted ARM Cortex-M3 "general-purpose" cores are there to power-efficiently offload time-critical and control tasks.

The feature list is quite extensive and includes support for 1080p stereoscopic 3D (playback to 3D TV), 1080p60 video format support, 1080p video conferencing and gesture recognition, 720p with stereo audio multi-chat (1 local user and four other users), support for up to two 12-megapixel cameras in parallel, and much more.

Texas Instruments reckons that the TI OMAP4440 will sample in Q1 2011 while production is expected by the 2H of 2011. 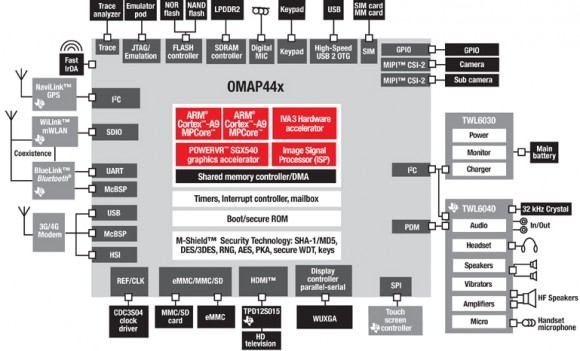 Last modified on 08 December 2010
Rate this item
(7 votes)
Tagged under
More in this category: « AMD ships two new speedy Phenoms Sandy Bridge CPUs on sale in Malaysia »
back to top