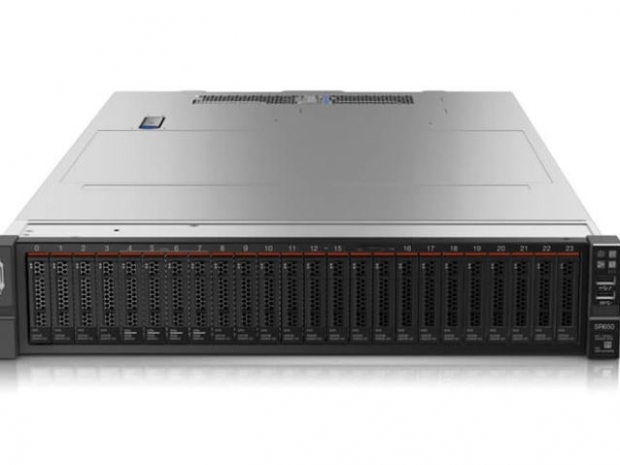 Intel has just officially launched its first server products built on its 10nm process node and its partners have issued their server-based products.

The third Gen Xeon Scalable family of processors are based on the 10nm Ice Lake-SP microarchitecture, which incorporates several new features and enhancements.

Core counts have been significantly increased with this generation, and now offer up to 40 cores / 80 threads per socket versus 28 cores / 56 threads in Intel's previous-gen offerings. The 3rd Gen Intel Xeon Scalable processor platform also supports up to 8 channels of DDR4-3200 memory, up to 6 terabytes of total memory, and up to 64 lanes of PCIe Gen4 connectivity per socket, for more bandwidth, higher capacity, and copious IO.

New AI, security and cryptographic capabilities arrive with the platform too. Across Cloud, HPC, 5G, IoT, and AI workloads, new 3rd Gen Xeon Scalable processors are claimed to offer significant uplifts across the board versus their previous-gen counterparts. And versus rival AMD's EPYC platform, Intel is also claiming many victories, specifically when AVX-512, new crypto instructions, or DL Boost are added to the equation.

Core counts in the line-up range from 8 — 40 cores per processor and TDPs vary depending on the maximum base and boost frequencies and core count/configuration (up to a 270W TDP). Intel is currently shipping 3rd Gen Xeon Scalable CPUs to key customers now, with over 200K chips in Q1 this year and a steady ramp-up to follow.

The new Cisco servers use the chips policy system to fill a wide range of workloads for customers, including Virtual Desktop Infrastructure (VDI), databases, AI and machine learning, big data and more, according to Cisco.

DD Dasgupta, vice president of product management for the Cisco cloud and compute business unit said that the chips were needed as customers’ hybrid cloud journeys accelerate, the need for simple yet powerful solutions increase.

“Cisco and Intel are proud to deliver solutions that not only meet the demands of today’s workloads but provide the foundations necessary to embrace new and emerging technologies.”

Dell got a leg up on the competition by announcing its plans for its first Ice Lake-equipped servers on March 17.

Other Dell server models using the new Intel chips are the C6520, the MX750 and the R750, according to the company. The servers are expected to be available globally in May 2021. Several other models, including the Dell EMC PowerEdge R750xs, the R650xs, the R550, the R450 and the ruggedized PowerEdge XR11 and XR12, are expected to be available in the second quarter of 2021.

Rajesh Pohani, the company’s vice president of server product management, said: “Dell EMC PowerEdge servers deliver better performance and security than ever before, putting customers on a path to autonomous infrastructure that will make IT simpler, more powerful and serve as the innovation engine for moving businesses forward.” [In the future.Ed.]

In HPE’s high-performance computing (HPC) and AI server lines, the HPE Apollo 2000 Gen10 Plus systems – built for HPC workloads like modelling, simulations and deep learning, as well as AI modelling and training – and the HPE Cray EX supercomputer lineup are also getting Ice Lake CPUs.

• The ThinkSystem SR650 V2 is a 2U, two-socket server aimed at customers from SMBs to large enterprises and managed cloud service providers, providing speed and expansion along with flexible storage and I/O for business-critical workloads. The systems use Intel Optane persistent memory 200 series and include support for faster PCIe Gen4 networking.
• The ThinkSystem SR630 V2 is a 1U, two-socket server that includes optimized performance and density for hybrid data centre workloads such as cloud, virtualization, analytics, computing and gaming.
• The ThinkSystem ST650 V2 is a new two-socket mainstream tower server that uses a slimmer 4U chassis to make it easier and more flexible to deploy in remote offices or branch offices (ROBO), technology or retail locations.
• The ThinkSystem SN550 V2 is part of the HPE Flex System family. Designed for enterprise performance and flexibility in a compact footprint, the SN500 V2 is a blade server node that is optimized for performance, efficiency and security for a wide range of business-critical workloads including cloud, server virtualization, databases and VDI.

Later in 2021, Lenovo expects to bring Intel’s latest Ice Lake processors to its edge computing server line with the introduction of a new highly ruggedized, edge server designed to handle the extreme performance and environmental conditions needed for

telecommunications, manufacturing and smarter cities use cases. More details will be announced later in the year.

Last modified on 08 April 2021
Rate this item
(0 votes)
Tagged under
More in this category: « Analog Devices builds radio for for 5G O-RAN
back to top