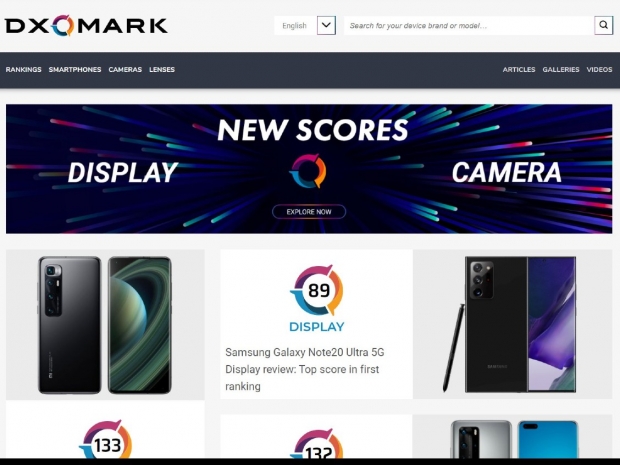 After great success with the scientific approach and standardization in camera testing, DXOMARK has decided to start testing mobile phone displays. There was a big debate for years how to accurately do that, and so far, no media house managed to stand out as the task is time and budget intensive.

We had a chance to spent quite some time and chat with DXOMARK's VP of Marketing Nicolas Touchard, who helped us understand the vision of the new DXOMARK display set of tests.

"With the arrival of 5G and increasing AI capabilities in mobile devices, consumer expectations of the quality of video, gaming and camera features are rising", said Frederic Guichard, CEO and CTO of DXOMARK. "Smartphone experiences are multi-sensory, so the addition of display to our camera and audio testing provides consumers with a more comprehensive view of device performances."

DXOMARK is addressing the elephant in the room. Apple started calling its display Retina, establishing a brand for its display excellence. For many consumers, the fact that a manufacturer uses an OLED or AMOLED display was enough to conclude that it must have a great display.

Manufacturers' specifications such as screen size, resolution, technology, and refresh rate do not tell much about a phone's display quality. Software, acceleration, fine-tuning, and especially calibration play a significant role in the overall display quality. Pixelworks is one of the companies that has been preaching this for a while. Nowadays, with the explosion of video content, conversion from SDR to HDR content or HDR resolution becomes very important.

DXOMARK examines screen quality from a deeper end-user perspective. Its test protocol combines 400+ objective measurements and over 20 hours of perceptual evaluation in the lab and real-life settings to generate the DXOMARK Display score for each product tested.

"We congratulate DXOMARK on the launch of its new smartphone display benchmarking program. Pixelworks believes that DXOMARK's scientific and comprehensive approach will do for the display what it has done to propel camera performance forward over last ten years", said Todd DeBonis, President and CEO of Pixelworks. "The smartphone is an inherently visual tool that consumers experience through its screen, which makes display benchmarking a natural complement to DXOMARK's world-renowned camera scoring. As a result, the market now has objective ratings that compare the entire visual experience of popular smartphones. Without an exceptional display, how can a user fully enjoy the benefits of having a great camera?"

Samsung Galaxy Note 20 Ultra 5G is the first on the display test, while the same phone scores fifth place in the DXOMARK camera test. The second on the board is the AMOLED OnePlus 8 PRO.  Samsung Galaxy S20 Ultra 5G is in third place, and all of the top three phones only score one point difference. 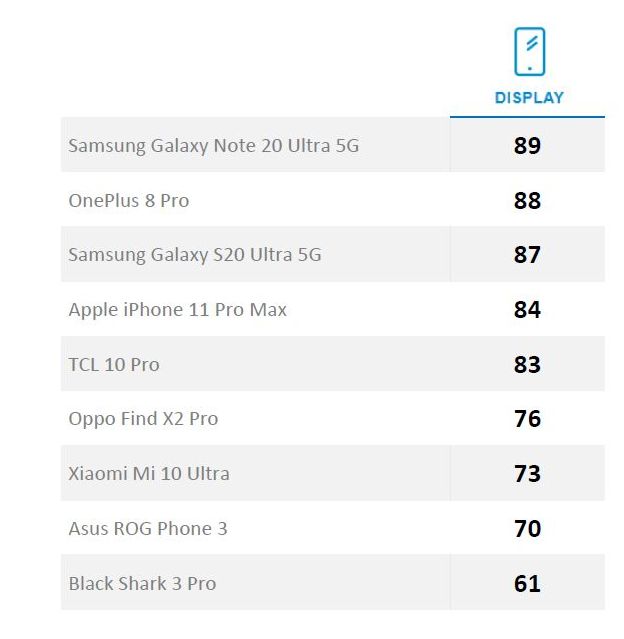 The first place is last year's iPhone 11, Pro Max, with 84, and the surprise of the test is TCL 10 Pro that scores 83. TCL 10 Pro sells around €450 or roughly half than most other phones on the top ten list. The excellence in display played a significant role for TCL 10 Pro, and after spending some time with the phone, we have to admit that the display and software and hardware behind make an excellent combination that was previously not seen in this price class.

Oppo Find X2 Pro scores 76, Xiaomi Mi 10 Ultra scores only 73 and seventh, even though it is first on the camera test. This does prove that many manufacturers tend to cut some corners. Since Xiaomi is quick to learn from its mistakes, we expect future Xiaomi leading-edge phones to score better.

Asus ROG Phone 3 scores 70, and the last on the top nine list is the Black Shark 3 Pro gaming phone with a 61 score. The last two phones are gaming phones aiming for high refresh rate, and we would expect that display quality at this price point, and the market will quickly improve.

Standardization of the benchmark will help improving overall display quality in the future generation phones.

Last modified on 20 October 2020
Rate this item
(0 votes)
Tagged under
More in this category: « Verizon teams up with Microsoft Huawei releases last pre-sanction phone »
back to top