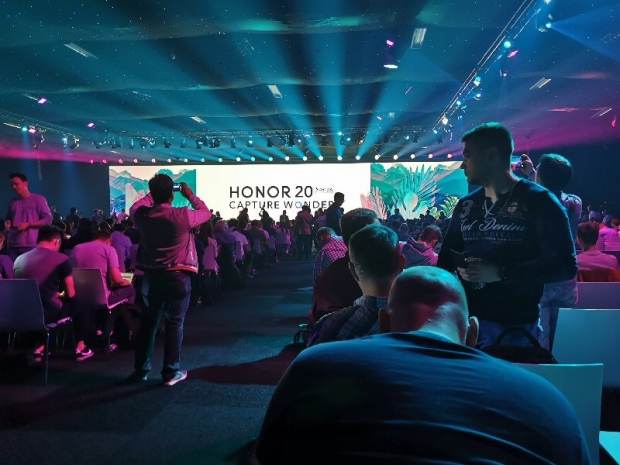 An uncharacteristically understated presentation at the hard to find Battersea Evolution conference centre marked Honor's presentation of a range of phones.

Perhaps the low-key presentation was because just the day before the US-Chinese trade wars kicked off in earnest on the technology front. Honor is a subsidiary of giant Huawei. In an interview on the BBC one senior Huawei executive said it wasn't much fun being a football in the tech war's  Cup Final.

Honor concentrates on marketing its products to young people and wants the youth of today to be fanboys or fangirls of its fones.

So now down to the bare bones. The presentation dealt with the 20 Series of phones  - those are the Honor 20 Pro, the Honor 20 and the Honor Lite.

The Honor 20 Pro has a 48MP Sony IMX586 48MP main camera, which includes a night mode. It also has a 16MP wide vision camera, an 8MP telephoto camera and a 2MP macro camera for taking close-up of interesting bugs. You can find the full technical specs here.

All the phones in the series have 6.26-inch displays. They'll be sold in the UK through Amazon, John Lewis, Argos and Carphone Warehouse.

Oddly enough – continuing the football theme – Honor also said it has recruited 23 year old soccer player Dele Alli to promote the phones. He plays for Tottenham Hotspur, or Spurs as the team is colloquially known. Huawei the lads, as supporters of Newcastle United might say.

Last modified on 23 May 2019
Rate this item
(0 votes)
Tagged under
More in this category: « Google loses three key SoC mobile engineers Sony not giving up on smartphones »
back to top