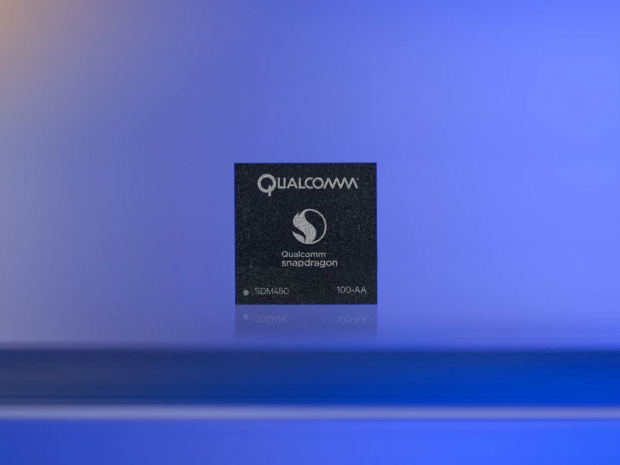 Some of the phones based on the 400 series include the HTC desire 510, the LG Lancet, the ZTE Speed, Marshall London, the Kyocera Hyrdo Wave, the Samsung Galaxy J5, the Moto G Play, Blu Life One, Oppo A33 and the Vivo Y35A. 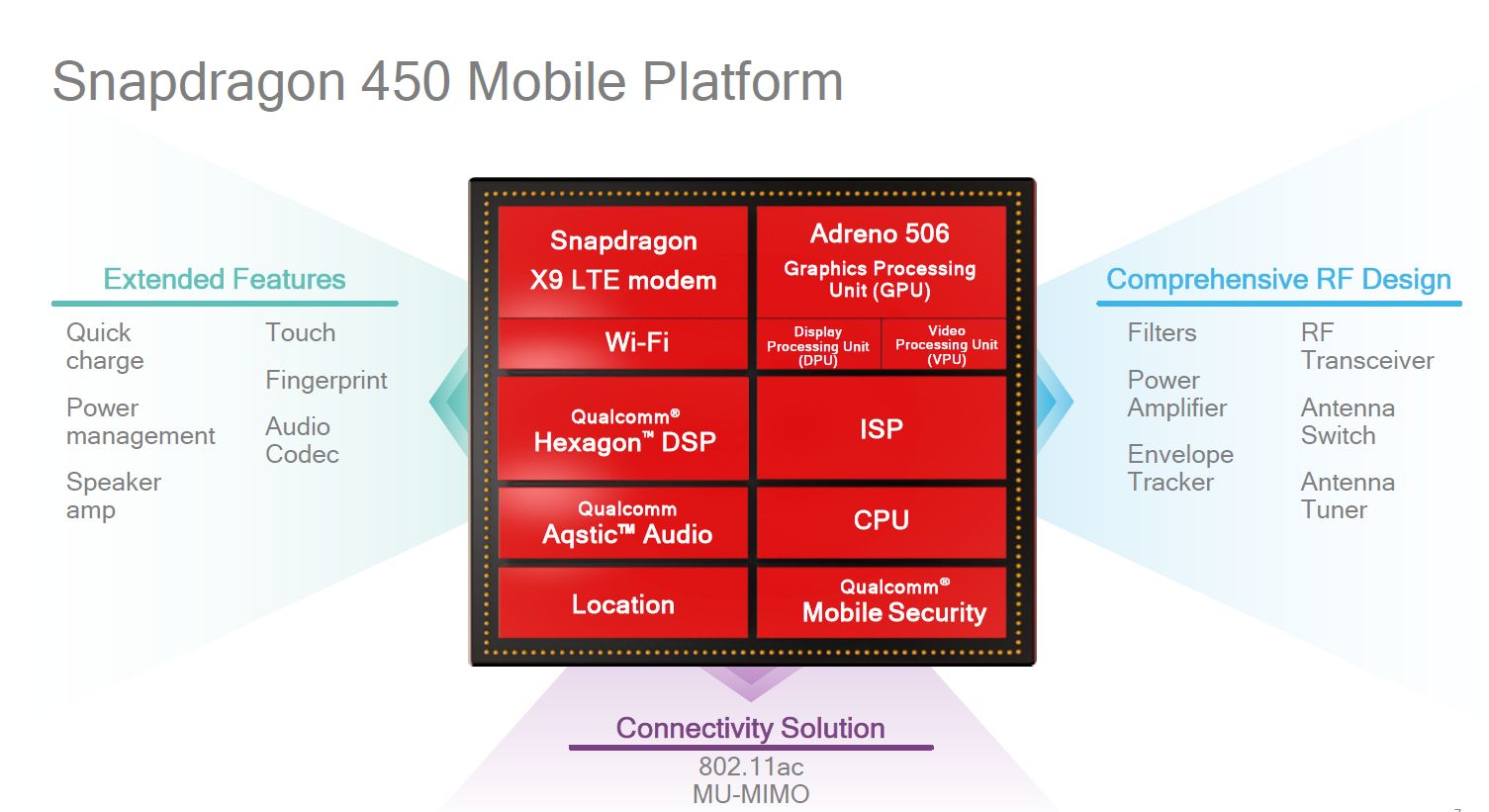 Due to the 14nm FinFET design, the battery life will get significantly better and you can expect four more hours at the end of the day compared to the Snapdragon 435. This is equivalent to 1.5 days talk time, eight days of music, 18 hours of video playback, 14 hours of streaming videos, seven hours of video capture or 15 hours of gaming.

On top of that, Snapdragon 450 supports Quick Charge 3.0 technology that will let you charge your phone from zero to 85 in 35 minutes. This is up to 27 percent faster and 45 percent more efficient compared to the previous generation and now the platform supports a very popular USB Type C. Qualcomm location enables higher accuracy positioning with lower battery consumtion compared to a GNSS only solution.

Adreno 506 brings up to 25 percent faster graphics rendering with up to 30 percent lower power. Gaming will definitely get faster. One way to think about the Snapdragon 450 is that most features from last year’s 600 series are inherited in the 400 series.

The SoC supports Snapdragon X9 LTE modem and joins the large Carrier aggregation supporting family. The X9 LTE enables Cat 7 downlink speeds with up to 300 Mbps, and Cat 13 uplink speeds of up to 150 Mbps.

The modem supports 2x20MHz carrier aggregation and some advanced compression features including the 64 QAM. From the connectivity point of view, the Snapdragon 450 supports 802.11ac with MU-MIMO (Multi User MIMO) a feature that can tremendously speed up wireless speeds when matched with a router supporting this feature. It is important to remember that Cat 6 with 300 Mbps speeds is available in 95 countries globally. More than 130 operators are investing in Cat 6 LTE. There are currently 194 commercially launched CA networks.

The Snapdragon 450 supports dual camera setup, each supporting up to 13 megapixels and a single camera solution can take care of a 21 megapixel camera. The camera supports Real time Bokeh, a camera blur affect during camera preview and Qualcomm Clear sight, something we got to experience with the higher Snapdragon tiers.

The SoC can combine the information from the Bayer/RGB sensor with a black and white sensor, resulting in improved sharpness in all lightning conditions, especially in low light. 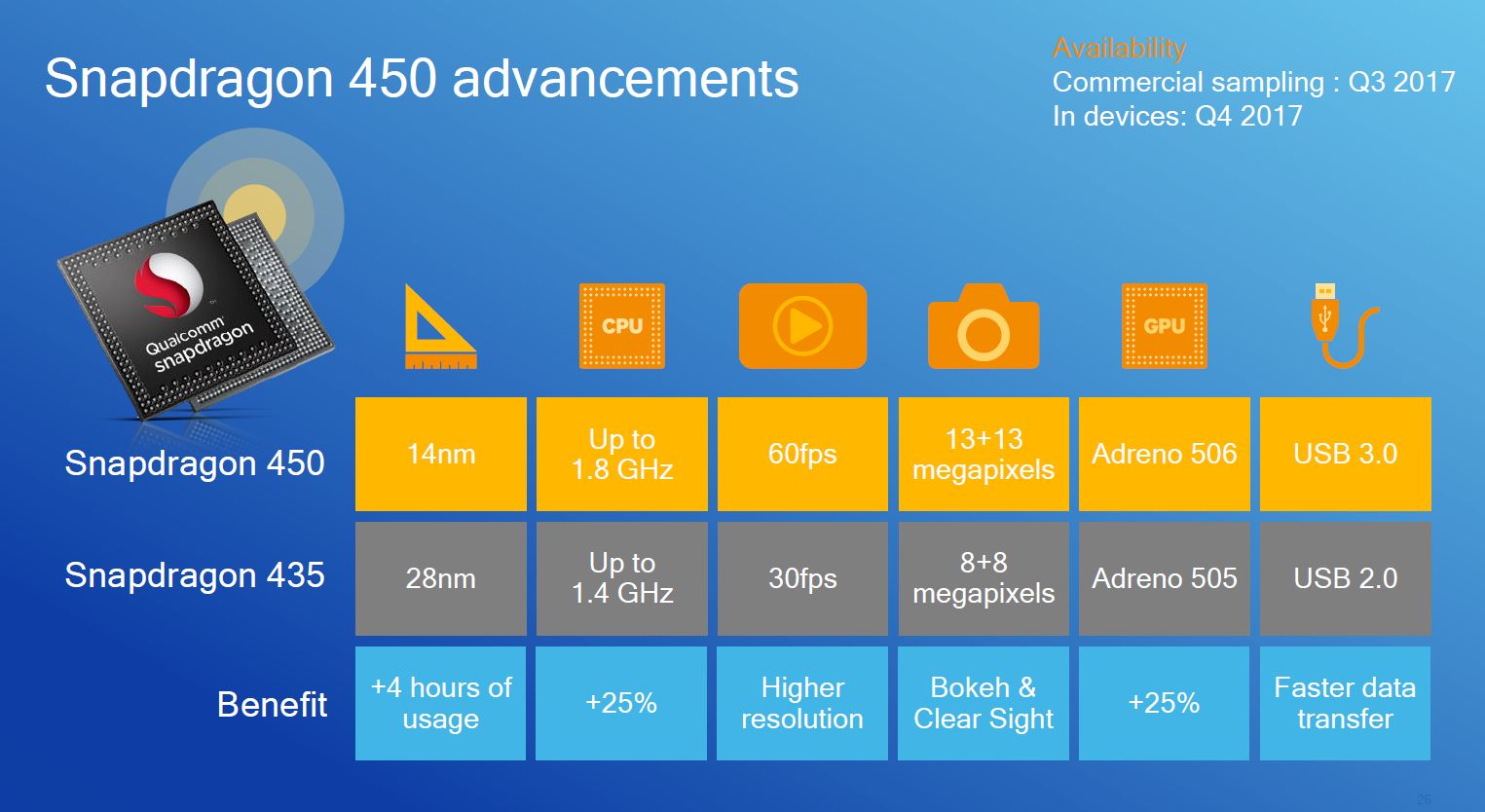 The new platform also supports FHD+ screens at 60 FPS including the new and popular 18:9 aspect ratio. You can expect to see higher quality displays with extended power saving in the new Snapdragon 450 tier. If that is not enough, despite the usual fingerprint sensor, the Snapdragon 450 is the first to enable eye based authentication. This is a one stop integration for OEMs with liveness detection, real-time authentication and cutting edge performance.

The platform supports USB 3.0, a speedy increase from the USB 2.0 with Snapdragon 435. Commercial sampling to customers is expected in Q3 2017 and in devices in Q4 2017. It will be, as always, up to Qualcomm customers to announce products.

Fudzilla asked Kedar Kondap, a vice president of product marketing, about the price range of the Snapdragon 450 devices and you can expect to see the Snapdragon 450 based phones between $150 to $250. Kedar pointed out that it will be up to manufacturers to implement the features and higher quality components will dictate the price.

US and European readers should be familiar with the very successful Moto G Play, a $/Euro 150 phone that launched with Snapdragon 400 series and did a good job.  Of course some brands from China will be able to offer this phone for less than that as Xiaomi Redmi 4A powered by Snapdragon 435 is currently selling for 599 Chinese Yuan ( 77.35 Euro / $88.36). Imagine the possible successor to the Snapdragon 450, that will be a hell of a phone for less than $99 bucks, at least in China  and India.

Last modified on 29 June 2017
Rate this item
(0 votes)
Tagged under
More in this category: « Vivo beats competition with under-screen fingerprint scanner Expensive phone-maker for the rich and stupid runs out of cash »
back to top