2017 is the year of Gigabit LTE phones 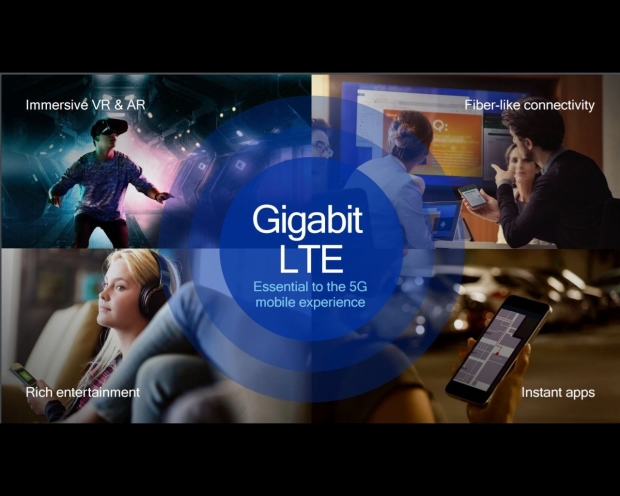 It has been quite some time since Qualcomm announced Snapdragon X16, the world’s first Gigabit LTE modem. The same GigabitLTE Snapdragon X16 modem is now part of the Snapdragon 835 - a 10nm SoC that is about to debut in a dozen high end phones.

Many people who are not close to the matter are having a hard time to understand why it's important to get faster modems in an everyday device. Many moan that the speeds they are getting from their carriers are not even touching the Cat 4 maximum speed of 150 Mbps on a download but they are forgetting that these are the best case scenario speeds for Cat 4. What happens is that the average speed increases with new technology, as most carriers now use the Cat 6 300 Mbps maximum speed network.

Today, Telstra in Australia, Sprint in the USA, EE in the UK and a few others have announced or have already deployed their versions of the Cat 16 category GigabitLTE capable of sub 1 Gbps speeds.

It's a  typical technology cat and mouse game. We need faster phones to get faster internet from carriers. What many people need to understand is that they won’t really get 1 Gbps download speeds - as this is a maximum, but the average speed might increase for many.

Don’t forget that Samsung Galaxy S8 is likely to ship with both Exynos 8895 and Snapdragon 835, both supporting GigabitLTE speeds.

With the mass introduction of the Snapdragon 835 and Exynos 8895 phones starting with the Samsung Galaxy S8, followed by GigabitLTE deployment by the carriers, we expect that the average download and upload speed will increase, enabling the next generation of content and applications. It looks likely that AT&T, T-Mobile and Sprint are already committed to the GigabitLTE, likely coming this year. Worldwide, there are 15 companies who plan to launch GigabitLTE this year.

If you are one of the skeptical ones that say we don’t need faster internet on the phone, I can remember one very rich man that goes by the name of Bill Gates who wasn’t convinced in the success of the internet. That definitely doesn’t mean that he was right about it, as now even Gates and the rest of the world have the capability of 100s of Mbps speeds on a smartphone device, something that didn’t really exist just a decade ago.

The same performance delta can be associated with internet speed as 3G stopped at 3.6 Mbps / 7.2Mbps. Speed eventually got to 21.6 Mbps with HSPA+. That was some ten years ago and today it is normal to have a Cat 6 LTE 4K network capable of 300 Mbps and, in some cases, advanced carriers get to 600 Mbps, and in the case of Telstra, it even gets to 1Gbps speeds. Qualcomm is planning to ship Snapdragon X20 with 1.2 Gbps maximum speeds in early 2018 and it is already sampling a modem that exceeds GigabitLTE'x magical number.

GigabitLTE with 1Gbps speed is just an introduction to 5G speeds, and it can be viewed as a gateway to 5G. 5G is a new communication technology that will enable a huge technology leap. One of the things that may become a reality is 4K or even 4K 360 video as the default. This will push the need for more and higher resolution VR capable Head Mounted Devices (HMD) and enable new games and applications that we cannot even imagine today.

Think about Facebook live with 360 VR capability? We don’t think that this is far off.

Last modified on 17 March 2017
Rate this item
(0 votes)
Tagged under
More in this category: « LG gives free Google Home with LG G6 in the US Huawei confirms P10 Lite »
back to top