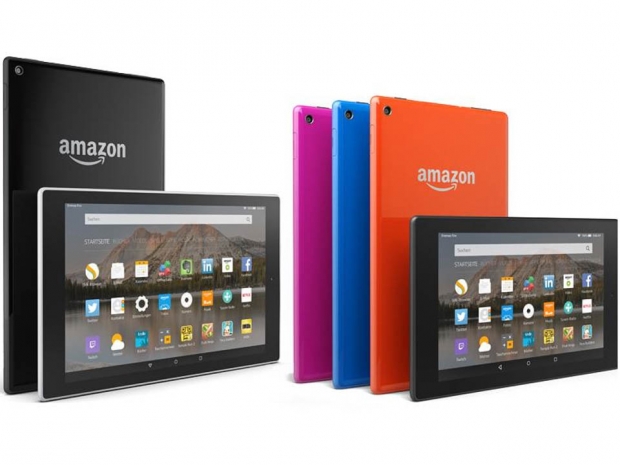 While research groups like IDC and Gartner have shown an overall 15.6 decrease in worldwide tablet shipments in 2016, the market has not gone entirely belly-up, as Amazon continues to pull ahead with a phenomenal 99.4 percent increase in annual tablet growth during the same period.

According to a report by the folks at TrendForce, Amazon managed to ship 11 million Fire-series tablets over the course of 2016 even as global tablet shipments fell by 6.6 percent from the previous year. While the sales numbers were impressive, the company still fell behind Apple at 27 percent of the market and Samsung at 17.2 percent, yet managed to beat expectations as a result of strong year-end holiday sales. 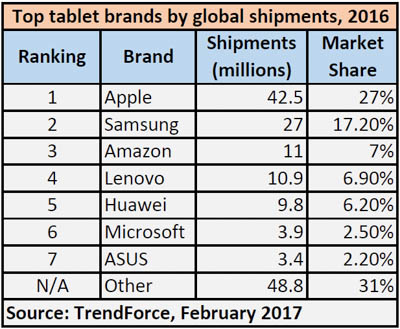 Apple also pulled ahead with strong tablet sales last year and retained its top spot, selling 42 million devices to Samsung’s 27 million. A few weeks ago, we wrote that IDC may have regretted telling the media to rely on expectations that the fruit-themed device company would allegedly oversee the decline of traditional PC sales by 2015. While traditional PC sales dropped 5.7 percent to 260.2 million in 2016, they still remain an impressive part of the overall device market and have not fallen as quickly as tablets have over the past year. 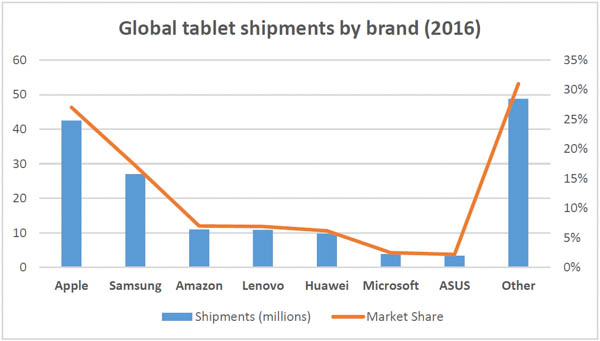 TrendForce expects tablet sales to continue declining from 157.4 million units in 2016 to around 147.8 million units 2017. While Amazon nearly doubled its annual shipments and Apple enjoyed strong iPad sales over the holiday season, other brands such as Microsoft are expected to fall into 7th place as the company experiences panel shortages for its Surface Pro series.

For a limited time, Amazon will occasionally offer its 7-inch 8GB Fire Essentials bundle and its 16GB Fire Essentials Bundle at discounted prices. For instance, the former had been available for $33.33 in November and $49.99 until earlier this month, along with free Prime shipping. The company is expected to offer similar deals throughout the year in an effort to strengthen its sales base from loyal Prime customers.

Last modified on 21 February 2017
Rate this item
(0 votes)
Tagged under
More in this category: « Xiaomi Mi 6 could come in two versions Samsung planning to release refurbished Note 7s »
back to top