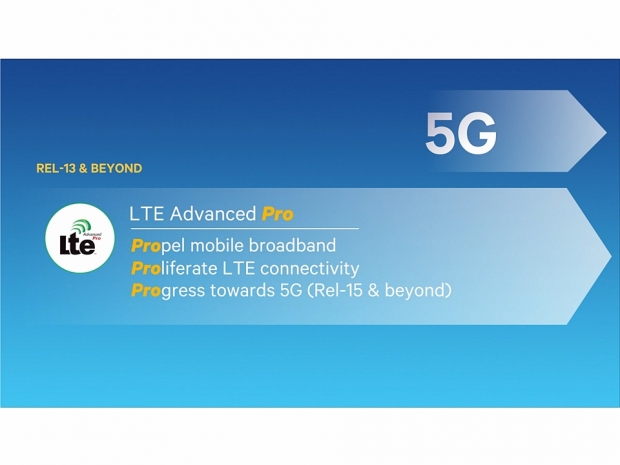 Recently, Qualcomm has published a new corporate presentation detailing its path from 3GPP’s “Release 13” (March 2016) and beyond for LTE networks– also more conveniently known as 4.5G LTE “Advanced Pro” – with a development timeframe between 2016 and 2020.

This will be an “intermediate” standard before the wireless industry continues with “Release 15” in 2020 and beyond, also known as 5G technology. The company intends to make LTE Advanced Pro an opportunity to use up more spectrum before 5G networks launch next decade and wants it to support further backwards-compatibility with existing LTE deployments, extremely low latencies, and unlicensed spectrum access, among many other new features. 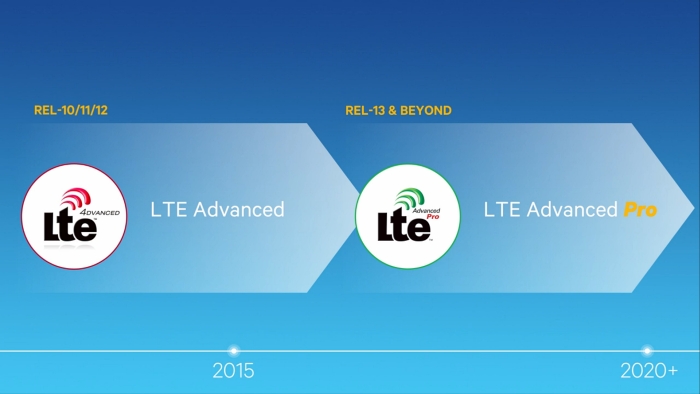 In its new 4.5G presentation, Qualcomm has highlighted ten major bullet points that it expects to be present in its next-generation LTE “Advanced Pro” specification. The first point describes delivering fiber-like speeds by using Carrier Aggregation (introduced with “LTE Advanced” networks in 2013) to aggregate both licensed and unlicensed spectrum across more carriers, and to use simultaneous connections to different cell types for higher spectral efficiency (for example: using smaller, single-user pCells combined with large, traditional cell towers). 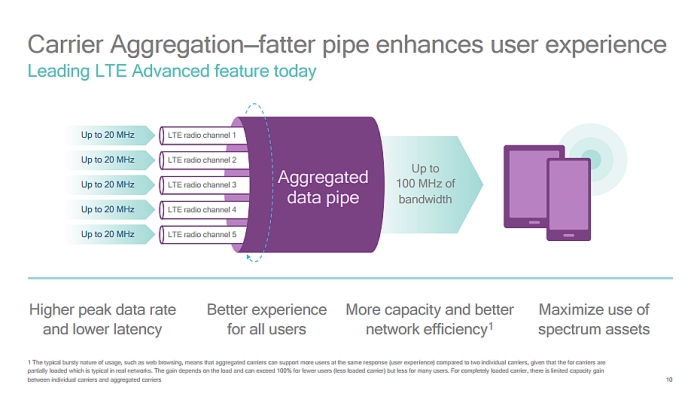 Qualcomm’s second bullet point is to basically make native use of Carrier Aggregation with LTE Advanced Pro by supporting up to 32 carriers at once across a much fatter bandwidth pipe. This will primarily be achieving using a new development called “Licensed Assisted Access.”

In short, Licensed Assisted Access (LAA) is the 3GPP’s effort to standardize LTE use inside of 5GHz WiFi spectrum. It was introduced in 2015 and allows mobile users to simultaneously use both licensed and unlicensed spectrum bands at the same time. This makes sense from an economic scarcity standpoint, as a fairly large number of channels are available for use in unlicensed bands (more than 500MHz in many regions). This should ultimately allow carriers with “low interference” in unlicensed spectrums to aggregate with licensed band carriers to make the most efficient use of all locally-available spectrum. 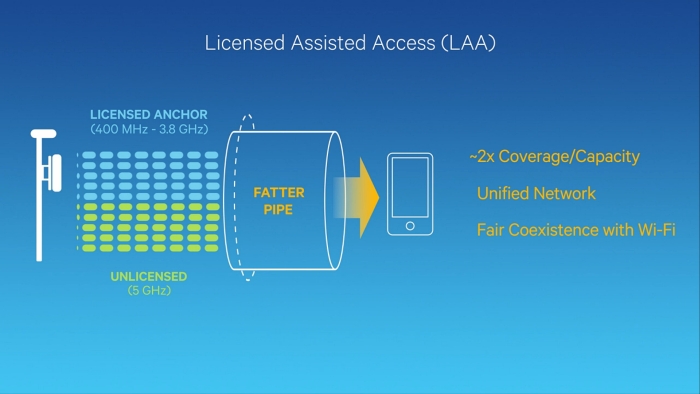 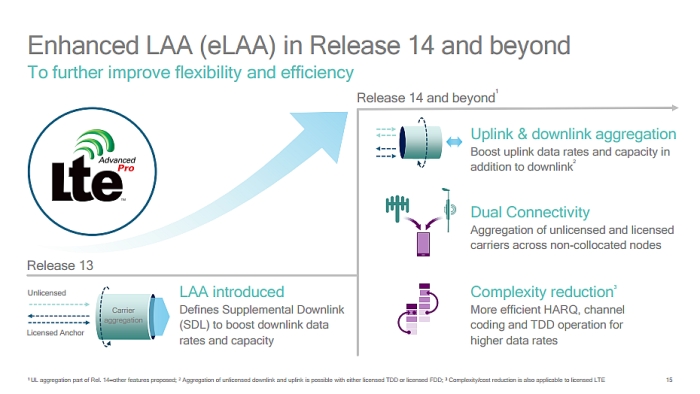 Qualcomm says that network traffic can be distributed across both licensed and unlicensed carriers when unlicensed bands are being lightly used. The result is that Licensed Assisted Access (LAA) users win by getting higher throughput and lower latency. In 3GPP Release 14 and beyond, Qualcomm eventually anticipates improving upon LAA with “Enhanced License Assisted Access” (eLAA). This second-generation design will include features such as uplink / downlink aggregation, dual unlicensed-and-licensed connectivity across small cells and large traditional cells, and a further signal complexity reduction for more efficient channel coding and higher data rates. 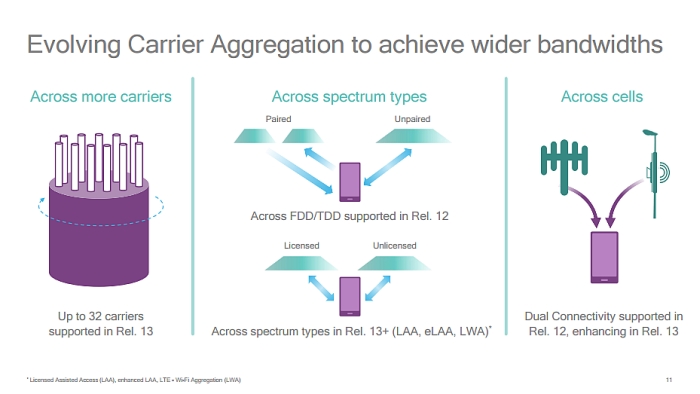 The fourth bullet point, and very important, is to increase traffic flexibility by converting uplink resources for offloading downlink traffic. In much more technical terms, Qualcomm will utilize a new “Flexible Duplex” design that has self-contained TDD subframes and a dynamic uplink / downlink pattern adaptive to real-time network traffic instead of a stagnant data stream. We can expect to see this implemented around 3GPP Release 14. 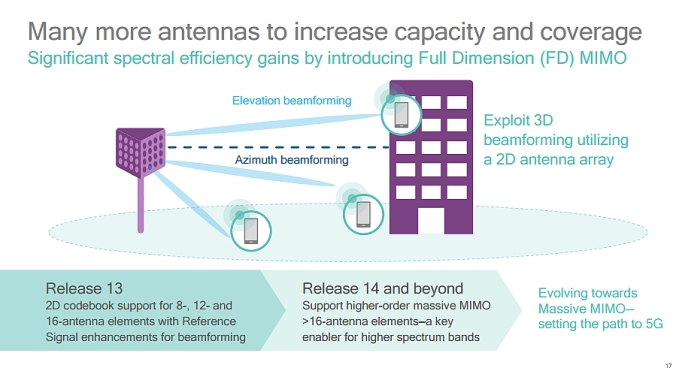 Qualcomm’s fifth bullet point for 4.5G LTE Advanced Pro is to enable many more antennas at the base station level to significantly increase capacity and coverage. In 3GPP Release 13 this will be called “Full Dimension MIMO.” This technology uses elevation beamforming by using a 2D antenna signal array in order to exploit 3D beamforming. Later down the road in 3GPP Releases 14 and beyond, we can expect support for what the company calls higher-order “Massive MIMO.” This will consist of more than 16 antennas in an array and should enable devices to connect to even higher spectrum bands. 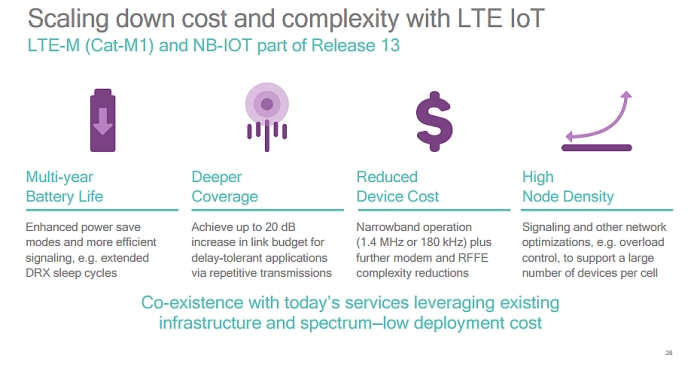 The sixth bullet point deals with increasing efficiency for Internet of Things applications, also known as “LTE IoT.” One element of this strategy includes enhanced power-save modes (extended DRX sleep cycles) for small devices. More importantly, this also means beyond 10 years of battery life for certain use cases. The company wants to use more narrowband operating modes (see: 1.4MHz and 180KHz) in order to reduce device costs, and wants to deploy “deeper cellular coverage” with up to 20dB signal attention. Previously, regular LTE and LTE-Advanced would top out around ~50dB for most carriers. Going up to 20dB will certainly make a noticeable difference for many indoor, multi-floor users in corporate environments and for those around heavy foliage, mountain ranges and hillsides in both urban and suburban environments. 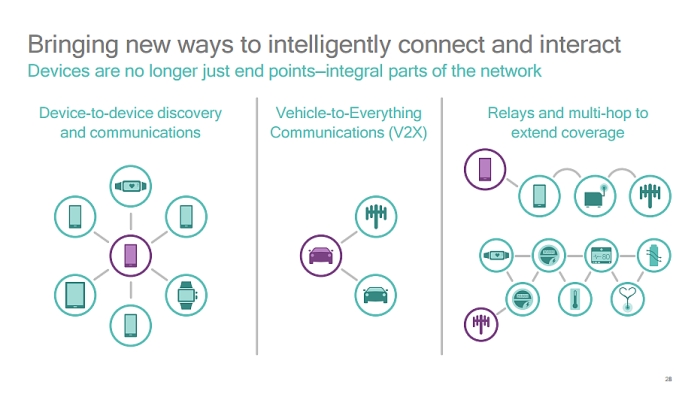 The seventh bullet point deals with integrating LTE into the connected cars of the future. Qualcomm calls this “Vehicle-to-Everything” Communications, or V2X for short. The goal is to connect cars at higher-than-gigabit LTE Advanced Pro speeds to one another, and to also connect them with nearby pedestrians and IoT-connected objects in the world around them. Privacy and political issues aside, this will supposedly make our collective driving experiences “safer and more autonomous.” Specifics include “always-on sensing,” vehicle machine learning, vehicle computer vision, “bring your own driver” and vehicle-to-infrastructure communication, all from within the car. The company calls the result of V2X automotive integration “on-device intelligence.”

To further things along with ubiquitous gigabit LTE, Qualcomm also eventually wants you to completely ditch your cable / satellite / fiber optic (FTTN and FTTP) television subscriptions and leverage the speeds of its LTE Advanced Pro technology for a “converged digital TV network.” This means television broadcasts over LTE to multiple devices, simultaneously – basically, an always-on LTE Advanced Pro TV broadcast stream to 4K home televisions, tablets and smartphones for the whole family, all at once and at any time of day. 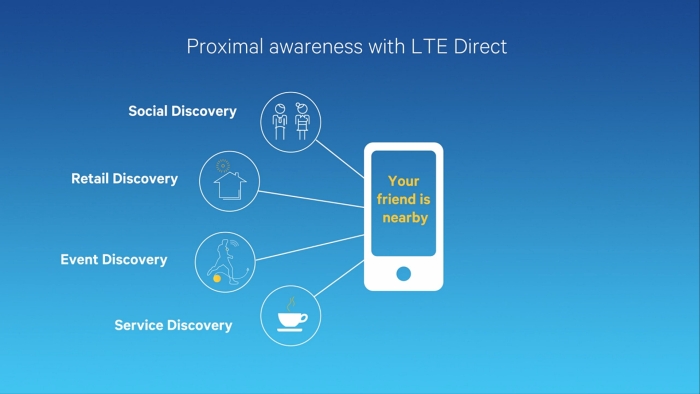 In the ninth bullet point, Qualcomm is boasting LTE-Advanced Pro’s capability for proximity sensing – without the use of GPS – autonomously. This includes using upgraded cell towers for knowing when friends are nearby and for discovering retail services and events, all without triggering WiFi or GPS modules on your device.

The tenth bullet point is an extension of the last one and uses LTE technologies at large for advanced public safety services (including 9-1-1 emergencies) – all without triggering WiFi or GPS modules for proximity data. This new “LTE Emergency Safety System” deployment will deliver both terrestrial emergency information as well as automotive road hazard information. Qualcomm expects this to emulate current Professional / Land Mobile Radio (PMR / LMR) push-to-talk systems on walkie-talkies.

While the gigabit-and-higher speeds of 3GPP Release 13 and beyond are still a couple years off, Qualcomm wants to kick things off with an update to 3GPP Release 12 (launched Q2 2014) with 600Mbps downlinks and 150Mbps uplinks achieved through the carrier aggregation technique.

During CES 2016, Qualcomm showed off its new “X12 LTE” modem add-on for the Samsung-made Snapdragon 820 Automotive SoC family, or “Snapdragon 820A” Series. The unit features LTE-Advanced (LTE-A) carrier aggregation (3x in the downlink and 2x in the uplink), comes with a new dual LTE FDD/TDD “Global Mode” capability, and supports dual SIM cards.

The X12 LTE modem features UE Category 12 on the downlink with speeds up to 600Mbps (75MBps) achieved through a transition from 64QAM (Quadrature Amplitude Modulation) in the older UE Category 9 specification (see: Snapdragon 810 modem) to a much higher 256 QAM. It is also possible to enable up to 4 x 4 MIMO on the downlink carrier which results in better bandwidth and improved coverage. New modem uses UE Category 13 on the uplink side for speeds up to 150Mbps (18.75MBps) with 64 QAM. The unit also has LTE-U support (LTE in unlicensed spectrum) to allow it to operate on 2.4GHz and 5GHz unlicensed channels for additional spectrum. Additionally, it can bond both LTE and WiFi links together to boost download speeds with LTE + WiFi Link Aggregation (LWA). 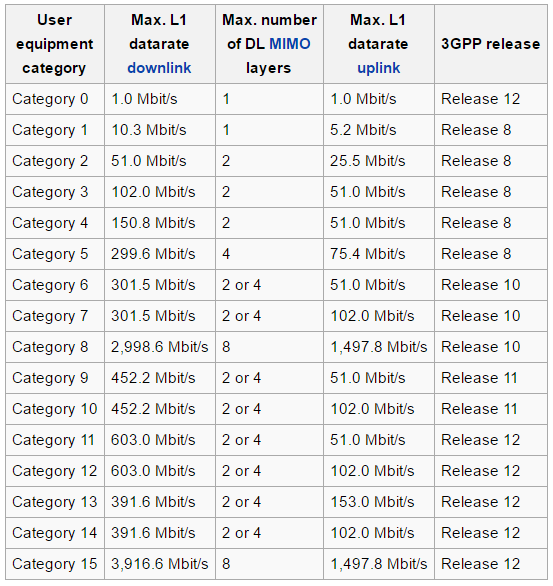 Qualcomm has recorded a webinar with FierceWireless all about its roadmap from 4.5G LTE Advanced Pro technology (2016 – 2020) to next-next generation LTE 5G technology (2020 and beyond), which can be found here.

The company will also be present at Mobile World Congress 2016 between February 22nd and 25th in Barcelona, Spain to demonstrate new features of LTE Advanced Pro – including “Enhanced Licensed Assisted Access” (eLAA) and MuLTEfire ("multi-fire") – at its exhibition booth. Our staff is sure to be present at the event and we look forward to sharing more hands-on demos very soon.

More in this category: « HTC One M10 will arrive after February Tame Apple Press braces itself for iPhone slump »
back to top