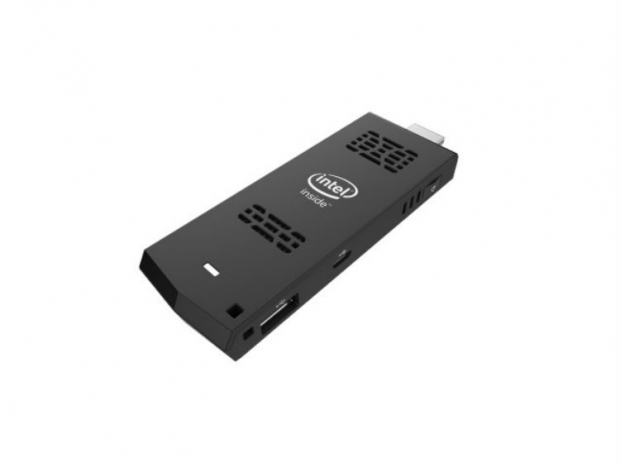 As well as Broadwell and Atoms

Intel recently showcased its Compute Stick, and this marks the emergence of a new niche for chipmaker. As you can imagine, it's a proper PC, but it's roughly the size of a Cromecast HDMI stick.

The Compute Stick comes with Windows 8.1, Windows 10, or Linux, and it is supposed to ship very soon. We knew about the Bay Trail-T and Cherry Trail equipped Compute Stick plans but we didn’t think that Intel planned to use more powerful Core processors in these devices.

It turns out that Compute Stick comes with Celeron and Pentium brand Bay Trail-T and Cherry Trail processors, but a more powerful version powered by Broadwell-Y and soon to launch Skylake-Y silicon is on the way, too.

Intel plans to market the Compute Stick as a pocketable, smart, entry-level device that should work with many screens, which will make it an interesting proposition for many industries. The big idea is that you will be able to bring your Windows PC anywhere and use it on any HDMI device, for example on your hotel room TV.

Broadwell-Y is also known as Intel's Core M processor and it is limited to 4.5W TDP. There will also be a Skylake-Y with a 4.5W TDP, if not even lower. Intel Core M comes with Intel HD 5300 Graphics, which should offer decent performance for this sort of device. The Core M 5Y71 is currently the fastest Broadwell-Y CPU and it will be replaced by Skylake-Y generation Core M in Q4 2015.

The Compute Stick with with Windows 8.1 Bing Edition (32-bit) and it’s listed at about €180. This is just the first Bay Trail-M version, with 32GB of on-board storage and 2GB of RAM. The suggested retail price should sit around $149 at launch.

Who would have imagined that you would be able to put a "big core" Intel processor in your pocket, and carry around a fully functional PC at all times? Mind you, the Core M currently powers some very serious devices like the new 12-inch MacBook and a range of Windows convertibles. Unlike Bay Trail, Core M hardware can be outfitted with loads of RAM, faster USB 3.0/3.1 connectivity and more technology that will make the stick PC format attractive to some professionals. Stick PCs won't be toys for media consumption, they could augment and replace SFF PCs and even bigger machines in many niches, turning virtually any monitor into an All-in-One system with few cables and low power consumption.

Last modified on 24 March 2015
Rate this item
(10 votes)
Tagged under
More in this category: « Intel could be the Lazerus of the Mobile market ZTE Nubia Z9 is official in Max and Mini flavours »
back to top