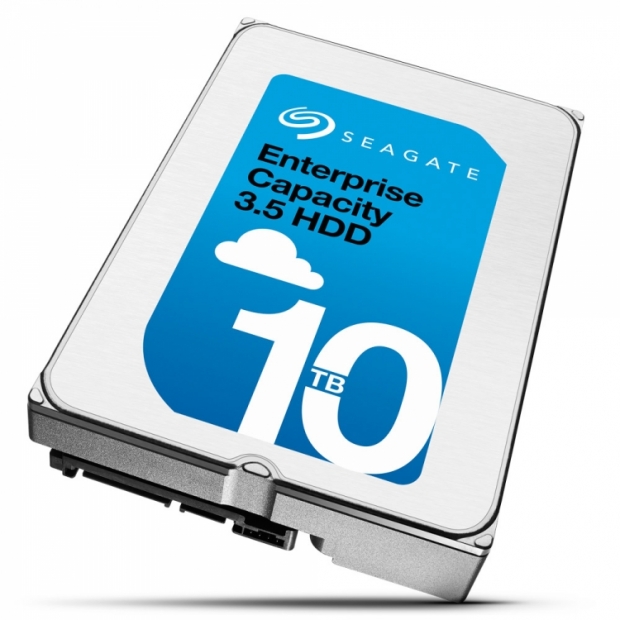 Seagate has announced that it has finally started to ship its 10TB enterprise-class helium-filled HDDs.

Announced and with limited availability for some partners back in January, the new 10TB Enterprise Capacilty HDD from Seagate is filled with helium and uses Shingled Magnetic Recording. As this is an enterprise-class HDD series, it will be available in version with 6Gbps SATA and 12Gbps SAS interface. The use of Shingled Magnetic Recording allows Seagate to provide up to 25 percent more aerial density compared to non-SMR drives and in 10TB version, this means up to 40 percent more aerial density compared to a 6TB drive.

The new Seagate 10TB Enterprise HDD is based on a 3.5-inch form-factor and uses seven platters and 14 read heads. According to Seagate, due to the use of helium sealed-drive technology, the new 10TB Enterprise Capacity HDD has reduced power and cooling costs for maximum TCO in a low weight storage slot.

The rest of the features include PowerBalance, which which optimizes performance per watt as well as the PowerChoice, a feature which reduces power in idle operation.

The new Seagate 10TB Enterprise Capacity HDD is rated for 24/7 operation and has a MTBF of 2.5M hours with 5-year limited warranty.

Although Seagate did not talk about the price, we spotted the new 10TB Enterprise Capacity HDD listed in Europe with pricing ranging from €600 to €700, depending where you look.

Rate this item
(2 votes)
Tagged under
More in this category: « Intel again demonstrates Optane SSD at IDF 2016 China ADATA sticks some LEDs in its RAM »
back to top