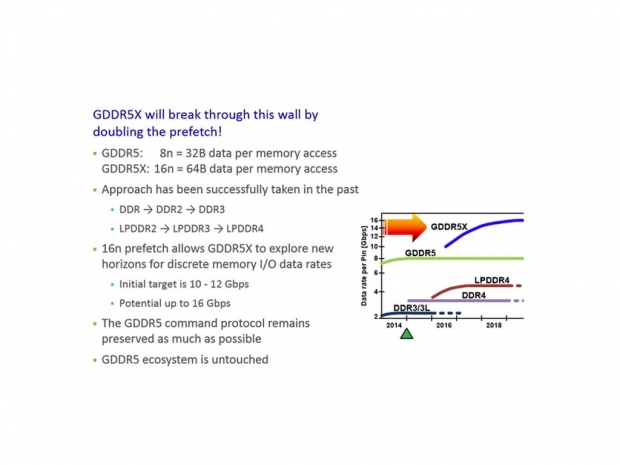 To double the bandwidth

Based on the same specification as the current GDDR5 graphics memory, which should allow both AMD and Nvidia to implement it in its future products but also doubles the effective bandwidth, the new GDDR5X memory promises 10 to 14Gbps per die, which is a significant boost from the maximum 8Gbps offered by GDDR5 memory.

While it still does not reach the bandwidth of the HBM2, GDDR5X should be both cheaper to produce as well as much easier to implement, due to a lower complexity of design and manufacturing. The new GDDR5X doubles the pre-fetch and thus providing double the bandwidth of the GDDR5 memory.

Micron expects GDDR5X to be available in the second half of this year, or just in time for both Nvidia's and AMD's next-generation graphics cards. Later iterations of the GDDR5X memory should reach theoretical maximum of 16Gbps bandwidth.

We have already wrote about GDDR5X memory earlier as Micron was quite keen to unveil some numbers and show the benefit of the GDDR5X memory. Earlier rumors suggest that both AMD and NVidia might use GDDR5X for its entry-level and mid-range products while HBM2 should be reserved for the high-end.

Last modified on 22 January 2016
Rate this item
(9 votes)
Tagged under
More in this category: « IC Foundries focusing on 10nm SK Hynix profits fall by 40 per cent »
back to top