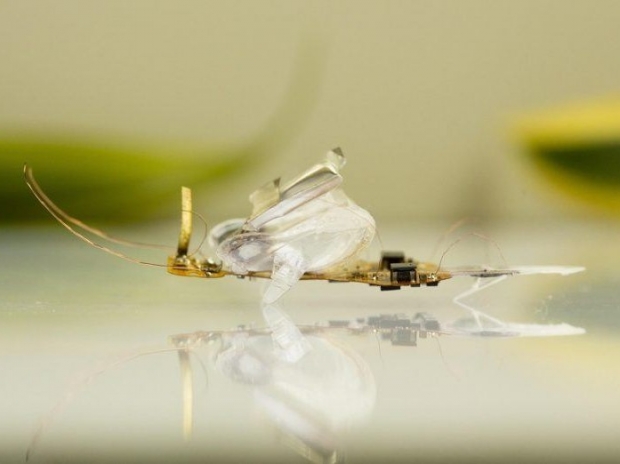 You can't step on them

Swiss boffins have developed a light, quick robotic bug called the DEAnsect, which can withstand several whacks from a flyswatter and can survive being stepped on by a shoe.

According to SiliconRepublic the miniature robot was designed with dielectric elastomer actuators (DEAs), artificial muscles, a microcontroller for a brain and photodiodes as eyes. The bug, which weighs less than a gram, can carry five times its weight, recognize black-and-white patterns and follow lines drawn on the ground.

Herbert Shea, a member of the research team with École Polytechnique Fédérale de Lausanne, said: “This technique opens up new possibilities for the broad use of DEAs in robotics, for swarms of intelligent robotic insects, for inspection or remote repairs, or even for gaining a deeper understanding of insect colonies by sending a robot to live amongst them."

Shea said eventually they will be able to talk to themselves. “We’re currently working on an untethered and entirely soft version with Stanford University. In the longer term, we plan to fit new sensors and emitters to the insects so they can communicate directly with one another.”

Of course, once they get it in their heads to destroy humanity they will be pretty much unstoppable.

Last modified on 24 December 2019
Rate this item
(0 votes)
Tagged under
More in this category: « Facebook wants to kill Android Apple Watch grasses up its owner »
back to top