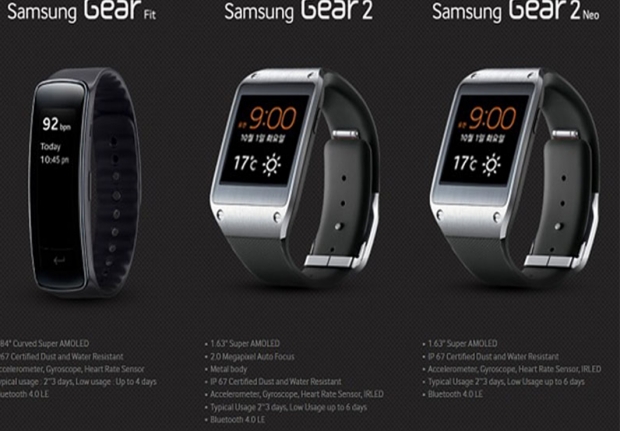 Samsung has announced two new wearables — an update to its Gear Fit activity tracker and the IconX, a pair of wireless earbuds for runners.

The company has also explained why it is so interested in the fitness band market, saying that bands currently half of the wrist-worn device market so it is worthwhile following.

The Fit2 is designed for all-day wear and Samsung’s gone a long ways toward making it more comfortable. It is thinner than its earlier designs and has a curved 1.5-inch Super AMOLED display.

Samsung claims it can run four days on one charge. It has a built-in heart-rate monitor and GPS, so wearers can track their route even when not tethered to a smartphone. There’s also 4GB of built-in storage and can store music offline. Samsung is working with Spotify to offer playlists but offline caching will have to wait for future models.

There is auto multi-sport and sleep tracking which means you do not need to tap the start button before you do something new. It’ll work with phones running Android 4.4 and cost $179.

It is all good but the technology has been around for a while. But the same cannot be said for the the IconX which has a bit of innovation attached to it but also a lot of woe.

To have fully wireless earbuds you need separate radios and batteries for each ear and that hits battery life. Samsung says that the IconX can run for only an hour and a half when connected and playing music. As a result it has been positioned as a “workout-only” device.

But in that role they are really interesting. They come with built-in heart-rate monitoring and are capable of tracking distance and speed. They also come with a wireless charging case. The sound isn apparently pants, but then anyone who listens to compressed MP3s on earphone buds is not going to notice the difference.

The headphones have 4GB of storage, so you do not need to carry a phone with you. We still think that they are a bit pricey at $199. They will start shipping in Q3 of this year.

Last modified on 03 June 2016
Rate this item
(2 votes)
Tagged under
More in this category: « Microsoft plans to take control of VR without making a headset MediaTek gets into the car race »
back to top