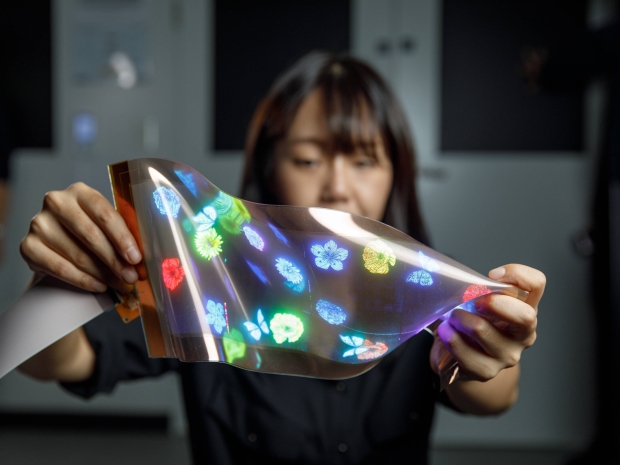 There is something in my eye

LG Display has shown off a thin, lightweight, stretchable, and twistable micro-LED screen which is made from the same silicon material as contact lenses.

The tech was developed by South Korea's Ministry of Trade, Industry and Energy (MOTIE) which wanted to boost the nation's electronics industry.

It is capable of a full color RGB, 100ppi resolution screen which is stretched from 12 to 14 inches. Micro-LEDs sized at 40 micrometers or smaller over a spring-like system of circuits allow the screens to be twisted and stretched without permanent distortion. The display resembles a heavy plastic wrapping.

LG said that the plastic is easily attachable to curved surfaces such as skin, clothing, furniture, automobiles, and aircraft, this unique innovation expands the potential of the display in various industries including fashion, wearables, mobility and gaming.

The company plans to come up with its first project using the tech in 2024.

As a Micro-LED, the display will likely consume less power and have brighter colors than rival display techs like organic light-emitting diodes (OLEDs). It means that displays can be placed on almost any surface with less bulk than is needed for other screens.

Of course, this means that every square inch of the universe will be covered with the stuff and only really has a use to broadcast advertising.

The downside is that a 100ppi resolution is only slightly better than the standard resolution for web images and half of what you get on a tablet. So it can't be used for smartphones, tablets and TVs

Last modified on 10 November 2022
Rate this item
(1 Vote)
Tagged under
More in this category: « Intel and AMD-based platforms can update Arc firmware Intel moves to PCIe Gen5 »
back to top