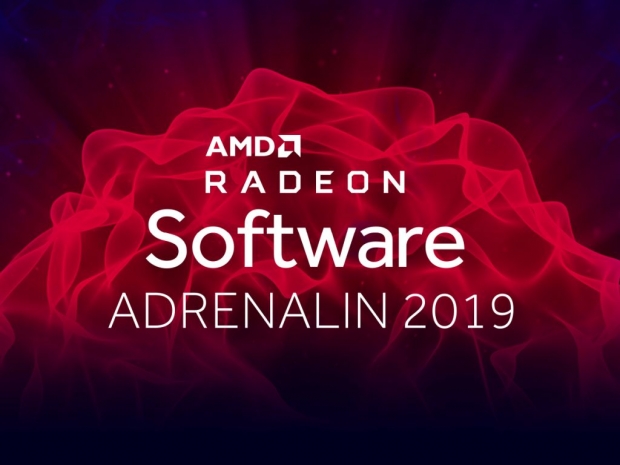 AMD has now officially released its latest annual major Radeon Software driver update, which sums up all the performance improvements released earlier this year as well as bringing a plethora of new features, including game and VR streaming.

As you already know, AMD has been releasing big annual Radeon Software updates since the AMD Catalyst Omega, which marked the beginning of AMD's push to provide both stable and feature-rich graphics driver packages. The latest, Radeon Software Adrenalin 2019 Edition driver, is an evolution of the original Adrenalin Edition driver released back in 2018, bringing a total of 23 new or enhanced features, as well as up to 15 percent performance gain in various games, which is a result of monthly and day-zero game driver releases.

One thing that AMD is quite proud of is its 93 percent reliability score, which was achieved in rigorous testing by QA Consultants back in May 2018. According to AMD, this is significantly better than its competition, and while we do not have any details regarding these tests, AMD graphics driver has never been more stable and AMD is certainly on top of all issues that come up along the way, mostly thanks to its great software team. In the words of Andrej Zdravkovic, Corporate Vice President for Software at AMD and a veteran from the ATI days, it is quite hard to improve on an already great product. During its presentation of the new Radeon Software Adrenalin 2019 Edition graphics driver release, Andrej mentioned that he is quite adamant in demanding that while new features are introduced, these do not have an impact on the stability or the performance.

Another big surprise is AMD's focus on keeping the graphics driver installer at the same size and it even got smaller. There are also quite a few improvements to the installer itself, giving it a one-click update and some other minor improvements. 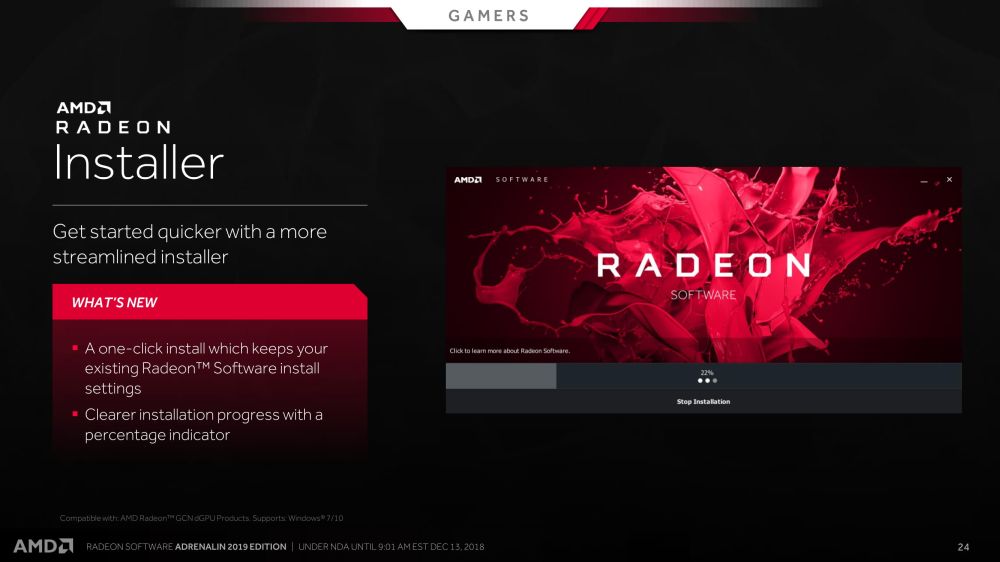 In addition to being a big major feature update, AMD has sneaked in a few game-specific updates with the Radeon Software Adrenalin 2019 Edition 18.2.2, including performance improvements for Assassin's Creed: Odyssey, Shadow of the Tomb Raider, DOOM, Wolfenstein II: The New Colossus and Strange Brigade games.

AMD has introduced several new or improved features with the Radeon Software Adrenalin 2019 Edition driver and these are presented in two groups, those for gamers and casual/entry-level users, and those with enthusiasts in mind.

One of the biggest updates for gamers and casual users is the AMD Radeon Advisors, which include Game Advisor, Settings Advisor, and the Upgrade Advisor. These aim to help an average user, and those that are not familiar with game settings, Radeon settings and generally hardware, with optimizing performance, enabling some settings or even offer upgrade advice for specific games, as the most expensive hardware might not be the best option for some users. 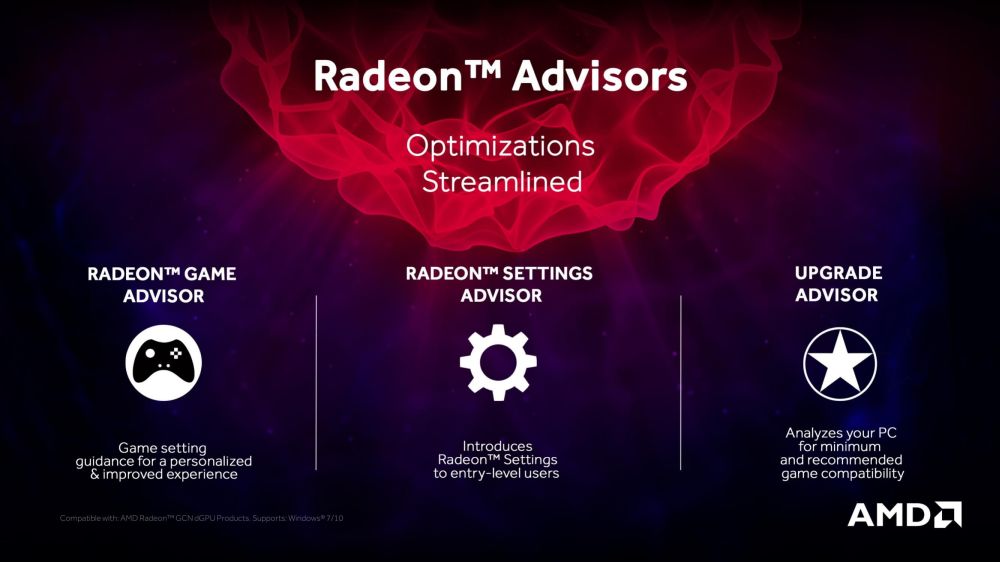 The Game Advisor fires up with the Radeon Overlay, and offer both hardware and game-specific settings advice. It measures real-time frame-rate as well as 99th percentile allowing you to enable or disable specific settings to get better performance or more eye-candy, while still getting a good average frame-rate. 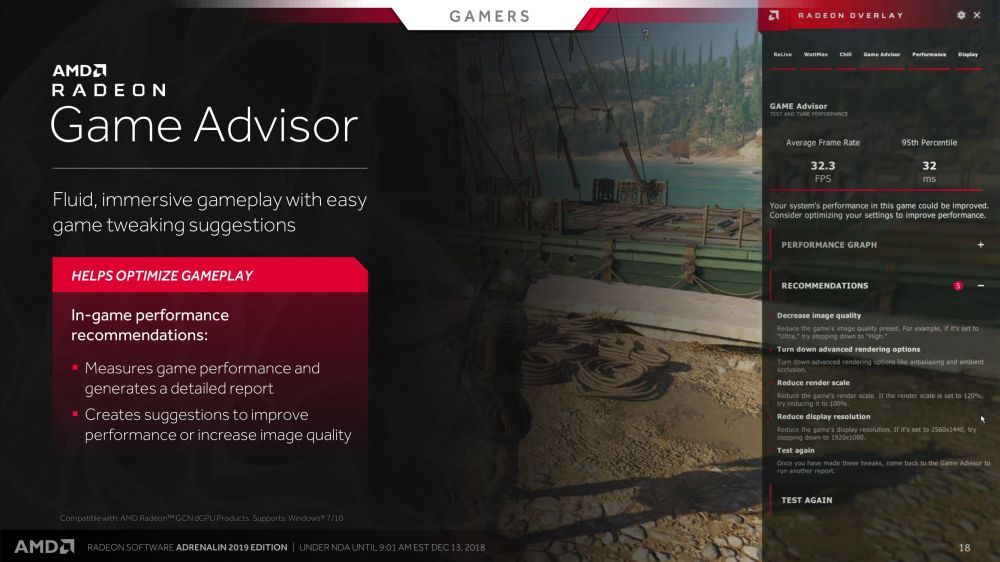 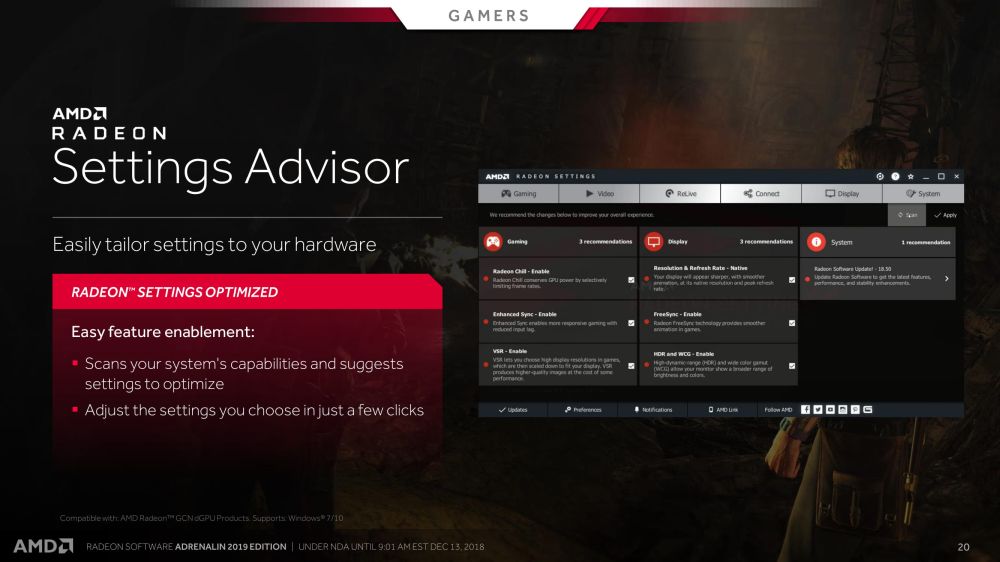 AMD will certainly make life a bit easier for average gamers, as, even according to AMD's research, a lot of users are not familiar with features, leaving some of those disabled. The best part of the story is that the Radeon Advisors will not be intrusive and will offer these only as a suggestion.

AMD also made significant improvements to the Project ReSX, bringing performance optimizations for the most popular PC eSports titles like Dota 2, Fortnite, and PUBG. These focus on delivering FPS performance, 99th percentile frame times and click-to-response times, something that is more important to this part of the gaming market than the sheer maximum and average FPS. 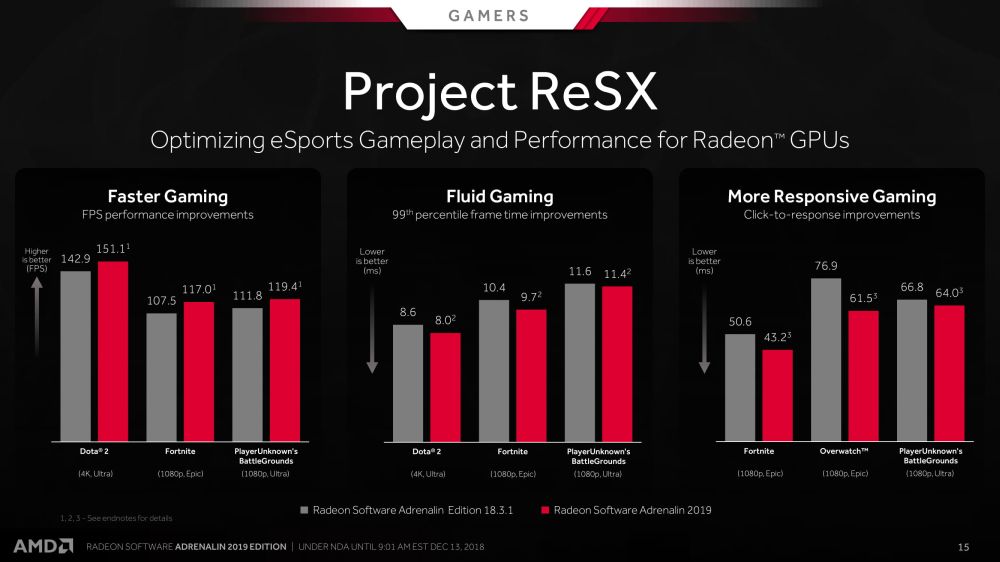 Plenty of features for enthusiasts as well

AMD has significantly updated some of the existing features for enthusiasts, especially the Radeon WattMan, which now brings support for automatic overclocking and under-volting. This also allows average users to pull a bit more power from their Radeon graphics card and gives enthusiasts a decent starting point for further fine-tuning and overclocking. Unfortunately, it does not test both voltage and frequency at the same time, so there is room for improvement. 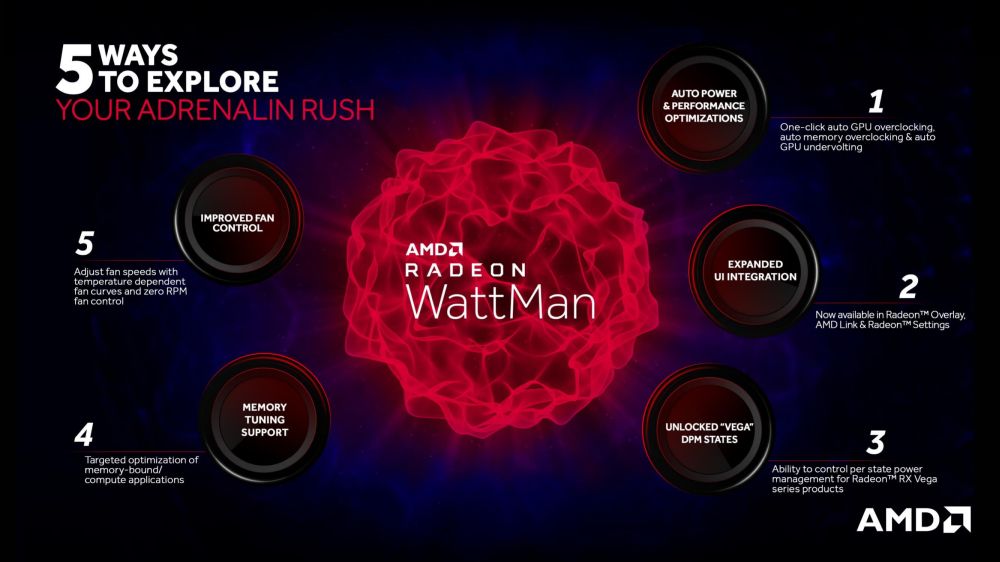 On the other hand, the new WattMan allows users to change memory timings as well.

There are also additional settings for fan control, which is now much better, allowing users to fine-tune the fan speed in relation to the temperature, giving a much higher level of control.

AMD has also integrated the WattMan in the Radeon Overlay and the AMD Link, allowing you to overclock the card directly from the overlay or via AMD Link smartphone application. 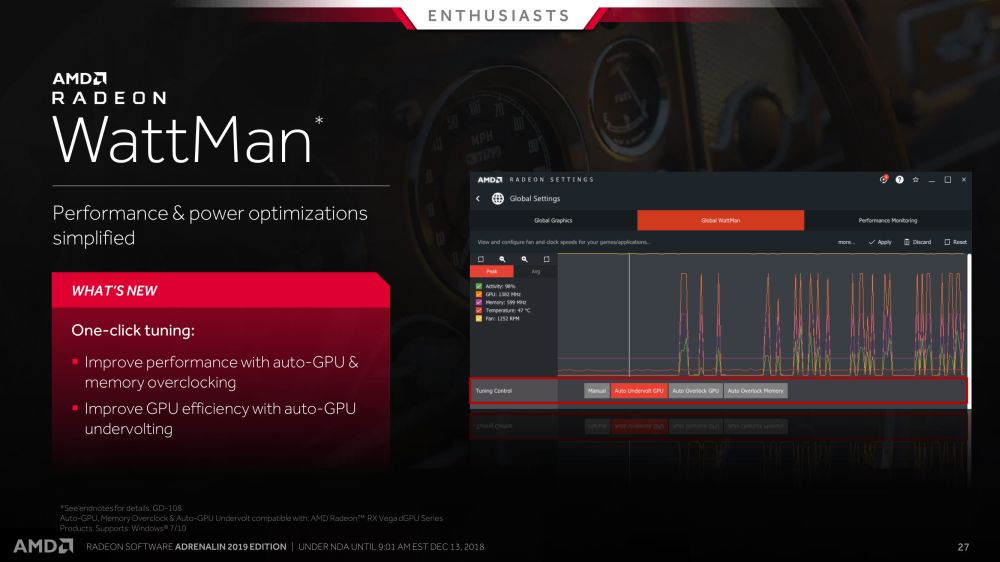 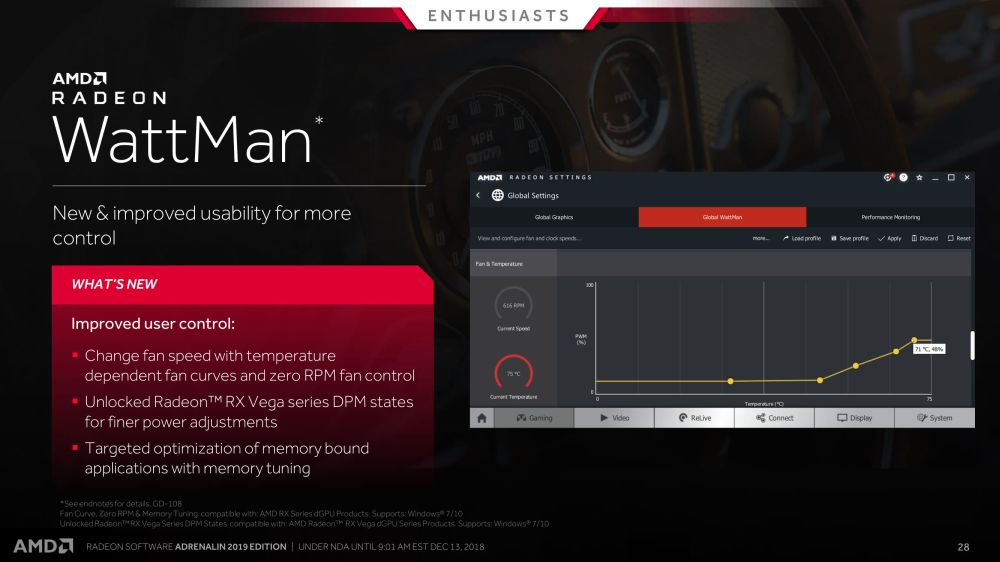 Radeon Chill has also been updated, and this is probably one of the most understated features of the AMD Radeon Software, as it brings significant power and temperature improvements, allowing the card to automatically lower clocks when the card does not need so much power, which is quite important and noticeable in eSports titles. 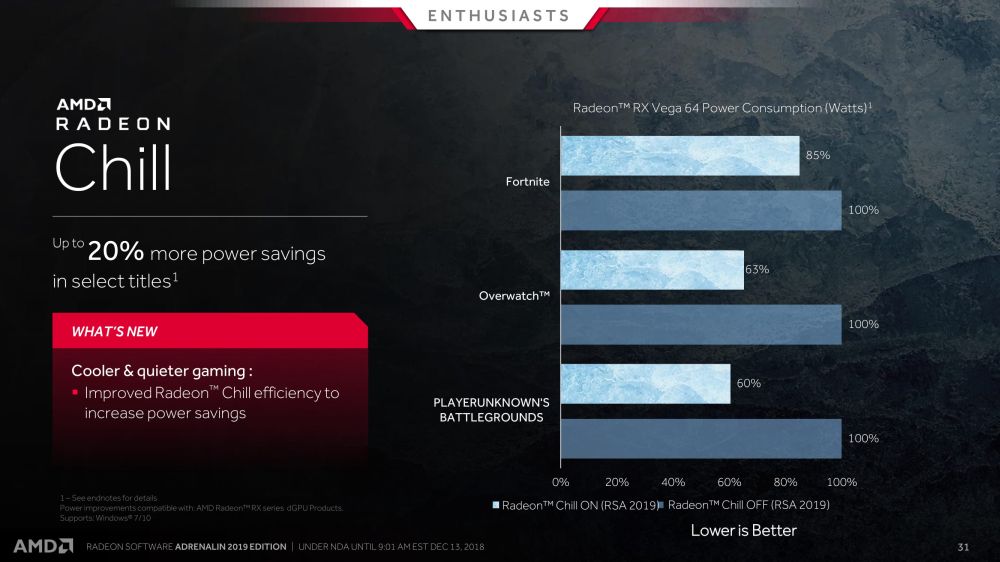 Other features get updated as well

AMD has also brought significant improvements to FreeSync 2 HDR, including the automated tone-mapping, as well as brought support for ultra-wide 21:9 display in its Virtual Super Resolution feature. 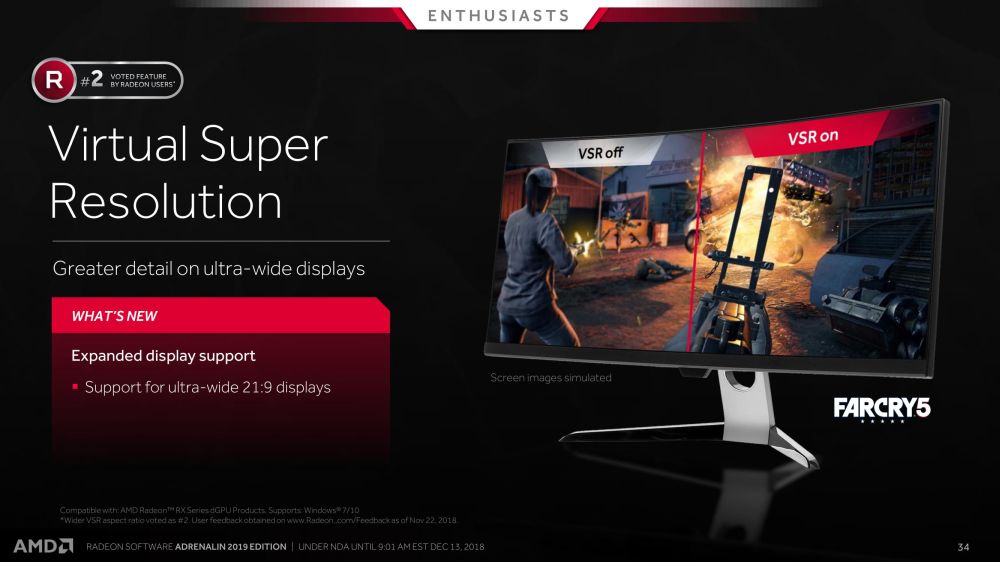 The Radeon Overlay has been significantly improved as well allowing users to change display settings directly from the game, allowing in-game specific power and performance optimizations with Radeon WattMan, and giving much better performance metrics, which now can be further personalized with both size, place, transparency and more. 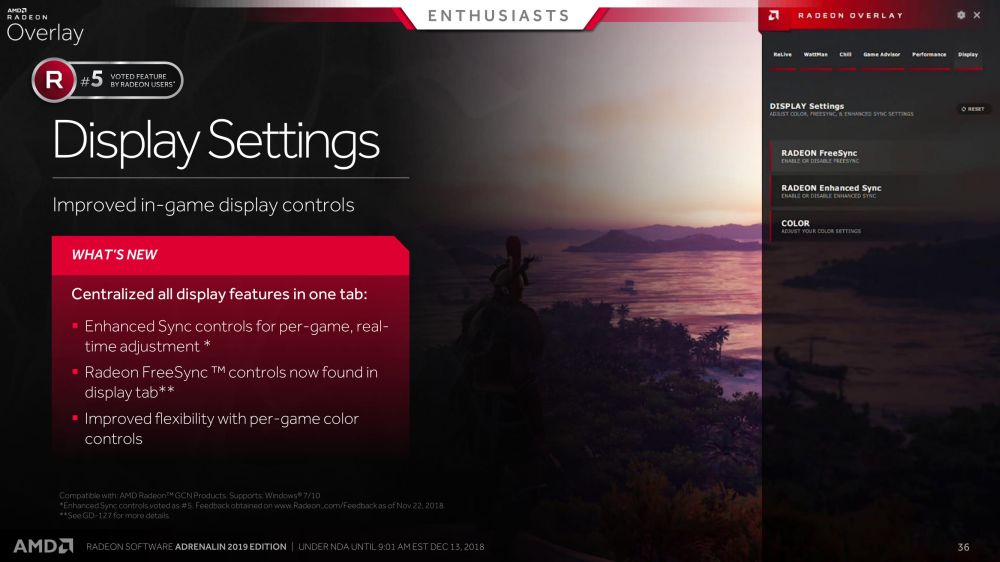 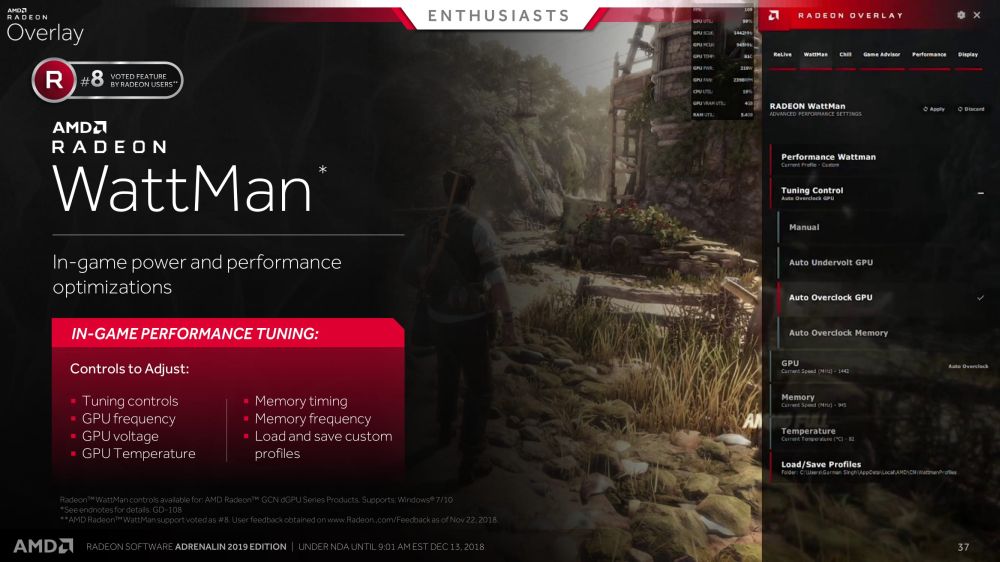 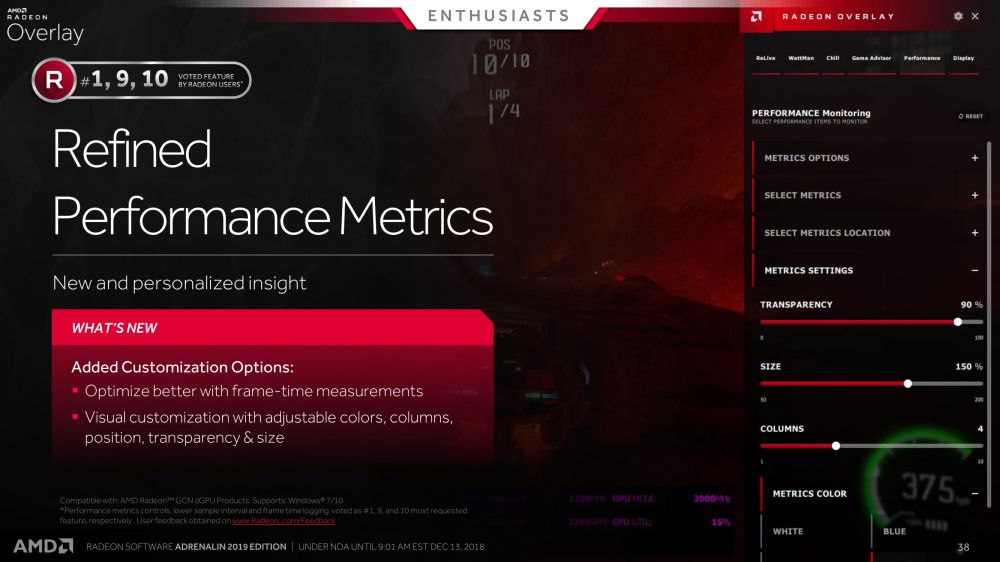 AMD Link, a feature that was introduced with the original Radeon Software Adrenalin Edition, and had its fair of problems, has been overhauled. It is now more reliable with a more stable connection and gives users a much better control, voice control, Radeon WattMan metrics and real-time tuning, as well as significant improvements for Radeon ReLive. 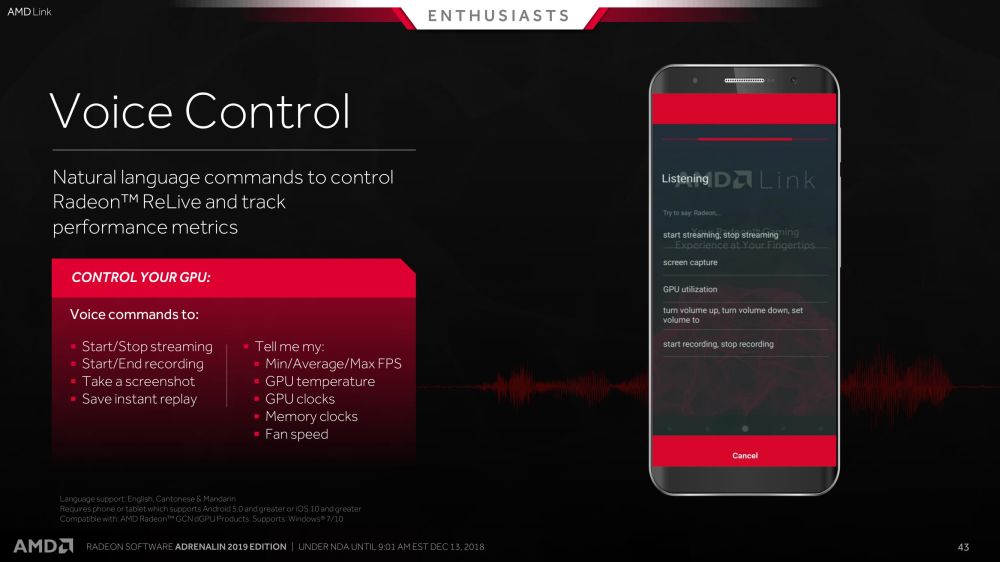 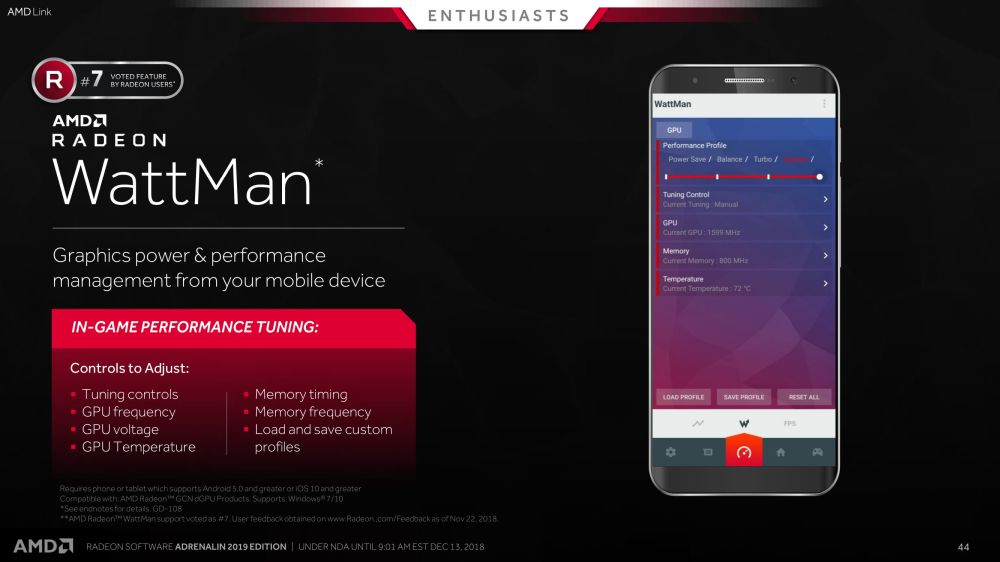 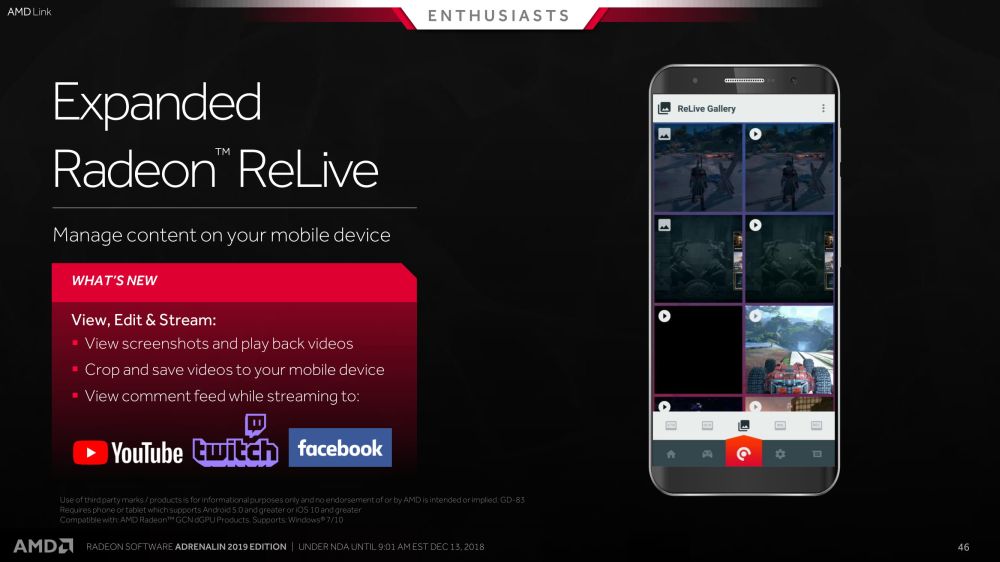 With the new Radeon Software Adrenalin 2019 Edition, AMD has put a lot of focus on creators and has updated its Radeon ReLive component with some features that, according to Youtube guys, are quite important. In addition that includes replaying last five to 30 seconds of gameplay, which will be usable to streamers as well as average users. 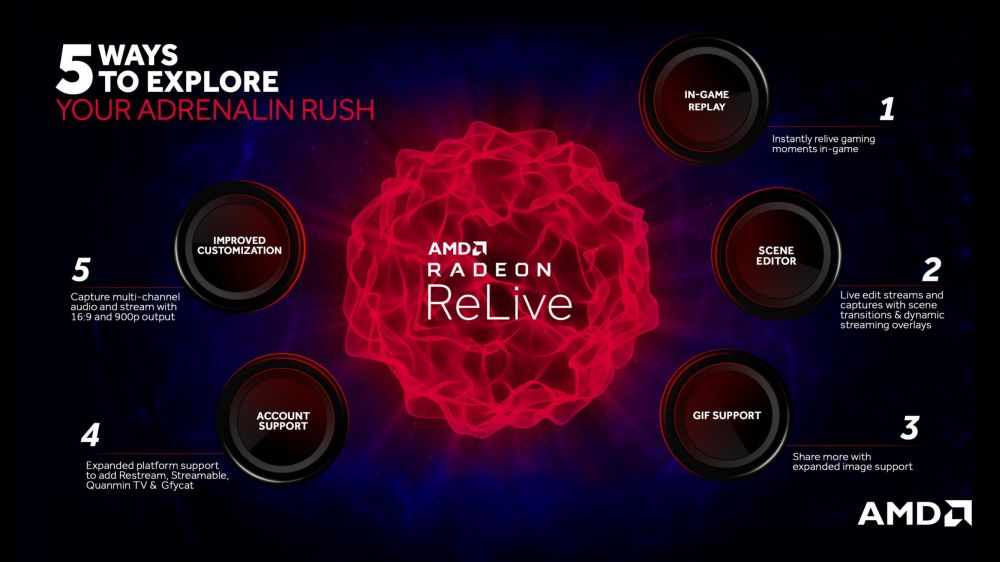 The new Scene Editor allows transitions between scenes with hotkeys or Radeon Overlay, as well as allows users to get further customization with the viewport. There is also an updated support for GIFs, additional support for most important platforms, as well as improved support for multi-channel audio support, new streaming aspect ratios and resolution with 16:9/900p streams, and more.

The Radeon ReLive also got some major updates that are not necessarily focused on creators. This includes new streaming options, allowing users to stream gaming directly to mobile devices on iOS and Android. It supports up to 4K 60FPS, low latency gaming with hardware acceleration, and allows users to continue gaming on their smartphone, tablet or any other Android or iOS device, with either on-screen controls or dedicated controller on that device. 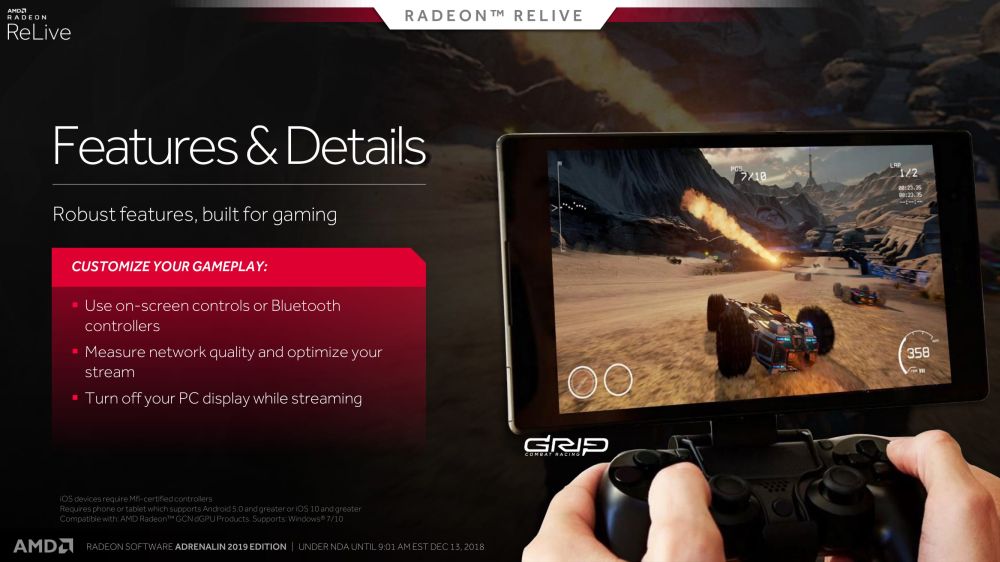 While this is not something new, AMD says its solution is up to 44 percent faster and more responsive than the competitive solution and it appears to be working pretty well.

What is more important, it also has support for VR, called ReLive for VR, allowing you to stream Steam VR titles to more devices, including some cheaper VR headsets. Although it is still not available, the feature promises good experience and will work on headsets which support Google Daydream (Android 7.0), as well as needs 802.11ac router, and Radeon RX 470/480 or better graphics card on Windows 10 OS. 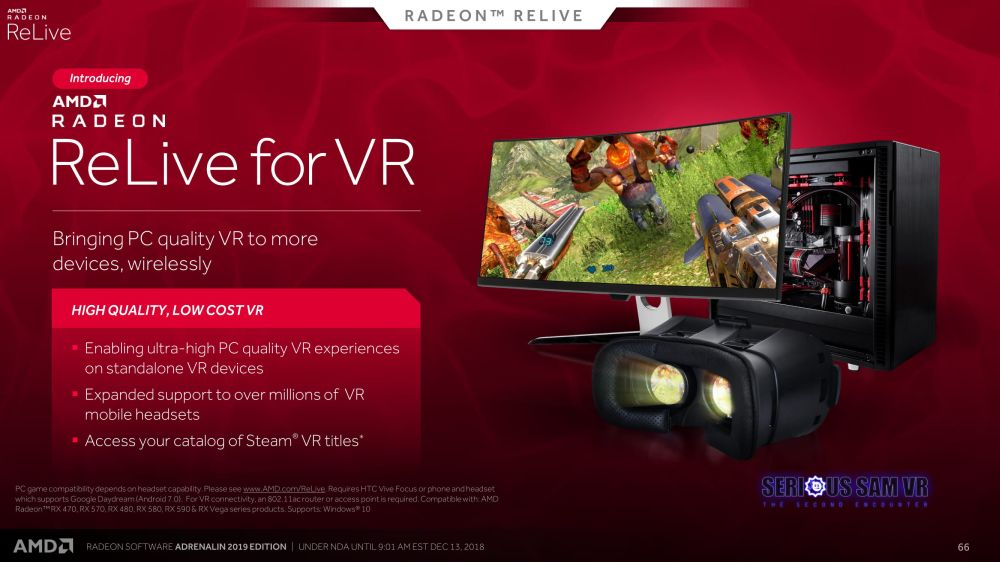 While its original Radeon Software Adrenalin Edition as a significant push forward in terms of features, stability, and performance, AMD has once again managed to push that bar higher.

The software team certainly deserves a lot of praise as it managed to completely overhaul the graphics driver software in a short four years, restoring faith in AMD drivers, especially when the competition is plagued by some bugs that just should not happen.

The new Radeon Software Adrenalin 2019 Edition has something for everyone, including gamers, enthusiasts, and creators.

You can check out the release notes and find download links for the new Radeon Software Adrenalin 2019 Edition 18.2.2 driver over at AMD's support page.