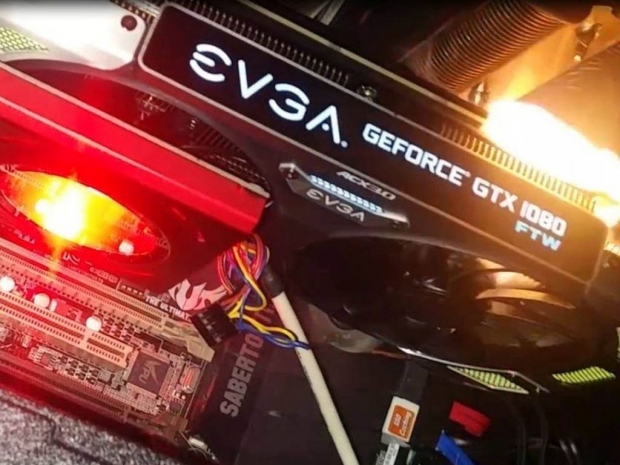 Will be offering VBIOS update and free thermal pads

EVGA has issued an official update regarding recent VRM bugs on GTX 1080 FTW and GTX 1070 FTW graphics cards with the ACX 3.0 cooler.

According to EVGA, the company has investigated earlier reports and after extensive testing, it claims that ACX 3.0 cooler was focused on GPU temperature and lowest acoustic levels possible, with the GPU reaching around 70C while running Furmark. While the GPU temperatures were never an issue, the company also says that the temperature of the VRM and memory, "in extreme circumstances", was marginally within spec and needed to be addressed.

To fix the bug, EVGA will be rolling out a VBIOS update, which should adjust the fan speed curve to ensure sufficient cooling of all components. EVGA claims that this will resolve potential thermal problems but those that want additional cooling can also ask for free thermal pads, which can be requested at EVGA's dedicated site.

EVGA also notes that it will offer full warranty support for its products, with cross-ship RMA and stands behind its products and commitment to its customers and users that are not comfortable with the recommended VBIOS update may request a different graphics card. EVGA also notes that all graphics cards shipped from EVGA after 1st of November will have the VBIOS update applied.

In the meantime, an EVGA GTX 1080 FTW has been caught on video over at Wccftech.com, just as its VRM part went up in flames and was recorded after the card went dead and during a troubleshooting process by a Youtube user.

The problem is quite big but we certainly appreciate the way that EVGA is handling things as it started addressing the issue just a few days after it was noticed. Users can either stick with that same EVGA graphics card or simply ask for a replacement and EVGA has been known for a decent RMA program.