AMD sticks an SSD into a GPU 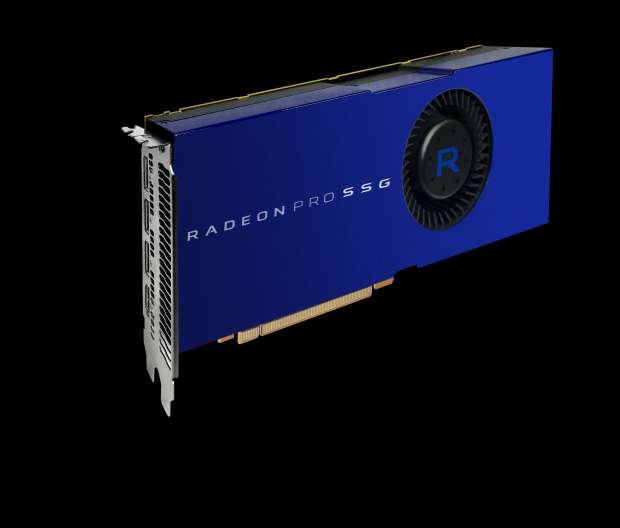 AMD ‘s Radeon Pro Solid State Graphics (SSG) card will have a 1TB SSD onboard for storage or as a supplement to on-board volatile memory.

The idea is to fix a problem with ever increasing file sizes which need more memory and storage. Typically a GPU tops out at 32GB of memory, which limits the processing of large amounts of data. However, the SSD will add a terabyte of memory, allowing larger chunks of data to be lined up for processing on the GPU. AMD says it can store pre-processed graphics or video for delivery to screens.

If the SSD is on the GPU it can deliver this a lot faster and the hardware could be useful for video editing and virtual reality.

It could also solve the problems of VR machines as it can line up a lot of data on the SSD beforehand and the issues of 4K because it will be easier to stream multiple screens simultaneously.

AMD said that placing an SSD next to the GPU also cuts internal PC bandwidth issues and you can also use it as a window’s storage drive, if you must.

At the moment we only have the technology in a developer’s kit, which AMD will show to the assorted throngs at the SIGGRAPH conference in Anaheim, California, this week.

The Radeon Pro SSG will initially be sold as a development kit for $9,999. AMD is hopeful it will have a few products around in the first quarter next year.

Raja Koduri, senior vice president and chief architect of AMD's Radeon Technologies Group said that SSDs paired with GPUs as persistent memory will be a feature in more GPUs in the future, and usage models will develop over time.