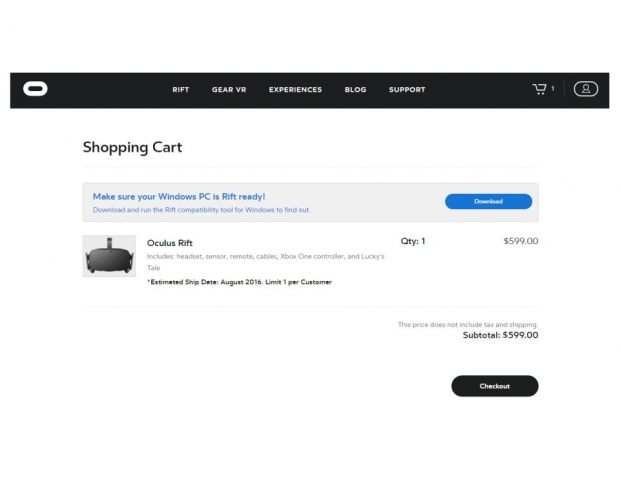 Last week at Nvidia's Games Technology Conference in Silicon Valley many people were moaning about the difficulties they were having getting their hands on the Oculus or HTC Vive. Now it seems that some of the early adopters of Oculus will have to wait for additional two months.

Enthusiasts who pre-ordered on 6 January 2016 hoping to get one at the 28 March launch are still waiting for the delivery. Oculus has confirmed that there will be some significant delays because of an “unexpected component shortage.”

The first time Oculus updated the delivery date, it told customers to expect their VR glasses by April 12. Since this is today and the postman did not bring you your VR kit, the company has updated the shipping time again. This time there is a more realistic shipping time.

Some of the Oculus Rift pre-orders from 6 January might ship between 23 May and 2 June – two months after the official launch.

If you order today, you should see your delivery in August of 2016 if everything goes smooth. Oculus's ability to meet deadlines reminds us of Tesla which has managed to delay each of its products so far.

It looks like the Oculus launch was premature and that was no way that company can keep up with the demand. Years of experience in this industry indicate that Oculus  didn’t order enough as it takes two months to get another batch of product manufactured and shipped.

The “unexpected component shortage” could indicate a bad decision to rely on a single supplier, but we will have to wait and see the official update. Oculus Rift looks good as a demo of things to come, but not nearly as a retail ready product. Same goes for HTC Vive and both are targeting the super high-end market.

Last modified on 12 April 2016
Rate this item
(1 Vote)
Tagged under
More in this category: « Nvidia Geforce Pascal GPUs launching at Computex 2016 Nvidia will launch three cards in June »
back to top