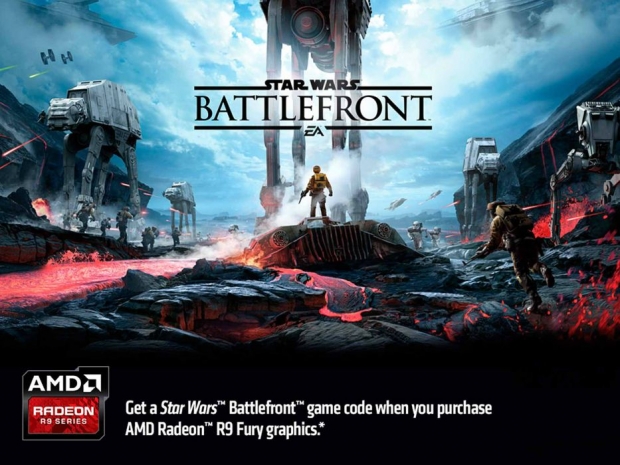 As said this would happen months ago

We were not surprised that AMD has officially announced its plans to bundle the Star Wars Battlefront with its Fury line of graphic cards.

The deal was sealed back in summer of 2015 as reported by Fudzilla when the game was officially launched, AMD offered the bundle too. The sad part was that Fury X and Fury Nano cards were excluded from this promotion.

Yes, you heard us right and we got the details from the official AMD Rewards: Q42015/Q12016 Star Wars Battlefront AMD RADEON R9 Fury COMPONENT AND SYSTEM INTEGRATOR CAMPAIGN

The offer covers Fury cards and Newegg has some selling for $499 with the bundle. Make sure that your etailer or retailer offers the code, otherwise you might not be getting the game.

Many have high expectations from the battlefront game. The game was released on November 17 in USA and Europeans will get the chance to play it at Midnight of the November 18 so in less than a half day..

We found a funny part of the document: