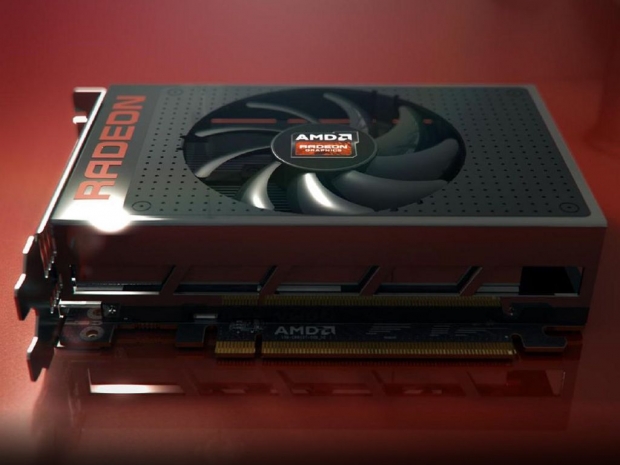 Scheduled to launch tomorrow, full specifications for the AMD Radeon R9 Nano have found their way online and thanks to a leaked company slide we now know that it will be based on a fully enabled Fiji GPU.

According to the slide leaked over at Videocardz.com, the upcoming Radeon R9 Nano, which is rumored to launch tomorrow, August 27th, will be surprisingly based on a fully enabled Fiji GPU. While earlier released Radeon R9 Fury featured a cut-down Fiji GPU with 3584 Stream Processors, the Radeon R9 Nano will use the same GPU found on the flagship R9 Fury X, featuring 4096 Stream Processors, 256 TMUs, 64 ROPs, as well as a 4GB of High Bandwidth Memory paired up with a 4096-bit memory interface.

Even the clocks are not far behind the R9 Fury X as the Radeon R9 Nano will be clocked at up to 1000MHz for the GPU and 500MHz (1.0Gbps effective) for the memory. This means that the R9 Nano will definitely be the fastest mini-ITX graphics card on the market and should be quite close to the R9 Fury X in terms of performance. With a shorter 6-inch PCB, AMD had to implement a weaker 4+2-phase VRM, compared to the 6+2-phase VRM on the R9 Fury X, and it needs a single 8-pin PCI-Express power connector. It still features a single HDMI and three DisplayPort outputs. 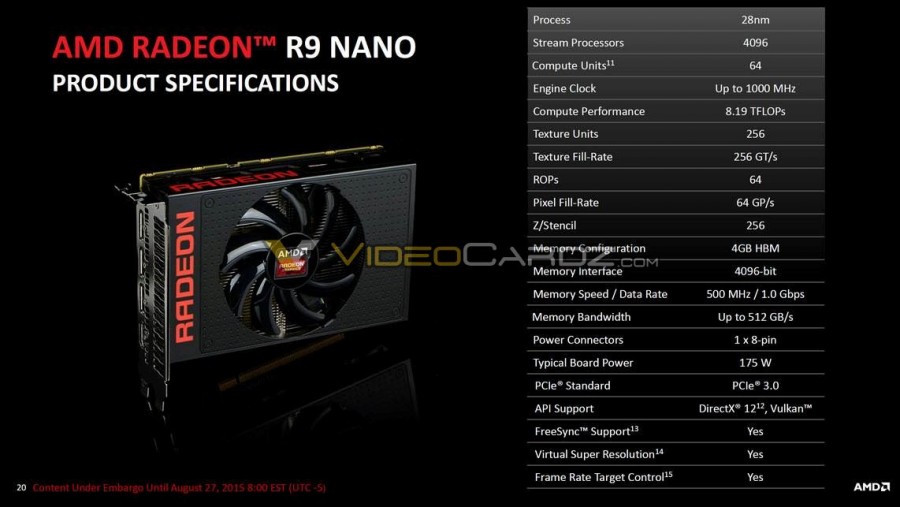 Unlike the Radeon Fury X, which had a TDP of 275W, Radeon R9 Nano is rated at 175W, which means that AMD has implemented a more agressive power/temperature throttle in order to keep the R9 Nano in 175W TDP mark, which should also translate to lower performance.

Unfortunately, we still do not know the price of the Radeon R9 Nano, but our sources suggest that we could see US $549 price tag. Bear in mind that the price is not carved in stone and AMD might pull a rabbit out of its hat and market it at US $499, which would make this mini-ITX graphics card quite interesting.

All we need now are some reviews which should be available in the coming weeks.