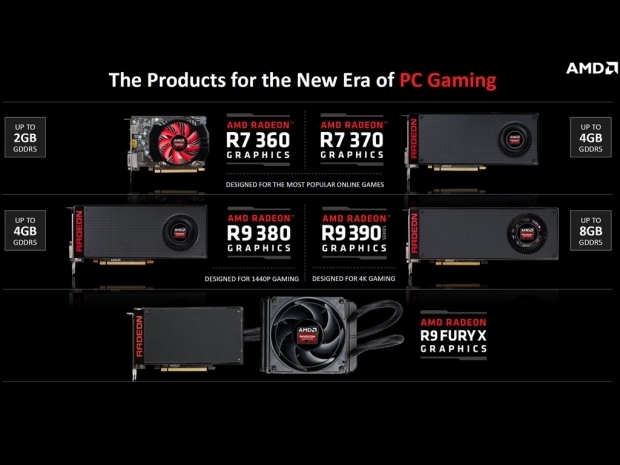 It looks the same

AMD was all passive aggressive on anyone claiming that "the new R9 390 series which has been in development for a little over a year now," is not based on new GPU, but the same Hawaii GPU which was behind Radeon R9 290 series.

The Radeon R9 390 and R9 390X cards are derived from the Hawaii GCN core which AMD introduced on the 25 September 2013. This  architecture is based on Graphics Core Next 1.1 cores. It has 2816 cores and comes with 176 texture units and 64 ROPs. Ryan Smith from Anandtech calls this GPU simply what it is - Hawaii.

We asked AMD if the R390 series is simply a rebrand or a new chip, and AMD always said that this was an improved Hawaii design. AMD executives never used the term new chip or a re-spinned chip.

The best answer that we could get is that the 28nm manufacturing process was more mature and that the chip was optimised. This optimisation has squeezed another 50MHz clock from the GPU while staying within the same 275W typical board power boundary.

This results with the memory bandwidth increase from 320GB/s to 384GB/s definitely help the overall performance. AMD is using 8GB on all of the Radeon R9 390 and 390X cards.

The only part that changed is the following statement:

·         Under “typical” gaming loads, power is expected to be lower than 290X while performance is increased

If you read it carefully, AMD never said that it has re-spinned the chip or made any major architectural changes. Taping out a new chip would cost quite a lot of money and AMD would have to put a lot more engineering effort to make it work. AMD engineers were busy with Fiji and GCN 1.2 cores in the Tonga product line. Fiji also comes with a High Bandwidth Memory (HBM) memory controller which is the major innovation to the chip. We are not sure that "Complete re-write of the GPUs power management micro-architecture" qualifies to call R390 a new chip, but this is your personal decision.

The R390X is priced at acceptable $429 and comes with 8GB of memory. Radeon R9 390 is priced at $329 which means that it is head to head with Geforce GTX 970 3.5GB + 512MB edition. In the last decade and a half  there has been a process of taping out the chip, making some radical changes and then call it something new. Otherwise it is just a better yield chip with a different name.