AMD was busy this week, as it announced the Carrizo APU, Samsung FreeSync monitors and it used the opportunity to speak about the next update to Mantle API technology.

Richard Huddy, AMD Chief Gaming Officer, delivered an update on the state of Mantle. He used a nice description of Mantle in his presentation stating that "Mantle is a driver with the AMD Catalyst software suite that lets applications speak directly to the Graphics Core Next architecture." Of course, your game needs to support Mantle and you need to have the right GPU and drivers for it.

The latest addition to ever expanding list of Mantle supperters is Capcom with its Panta-Rhei engine.

AMD is telling the world that there are four engines and 20+ launched or upcoming titles, and 10 developers publically announced their support for Mantle. There are close to 100 registered developers in the Mantle beta program. 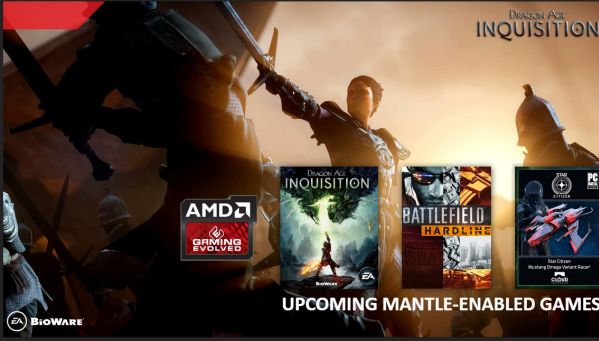 Dragon Age Inquisition from Bioware, Battlefield Hardline and Star Citizen Mustang Omega Variant Racer support Mantle out of the box and should be launching soon.

Mantle can increase the frame rate in certain scenarios by up to 66 percent, but you do need a combination of a mainstream CPU and high-end graphics to see the biggest benefits. In end effect, Mantle can save you money that you planned for CPU upgrade, but it will be supported in dozen games, at least for now.

Mantle is a nice addition to the Radeon line-up and it is nice to have feature for people who have Radeon graphics in their gaming machines. It looks like there are more titles to come and there will be more games to support this low level access graphics feature coming in 2015.