Reference design, but ships in a metal suitcase

Sapphire has finally revealed some details on its Facebook page regarding its own Radeon R9 295X2 graphics card. While it will still be based on the standard reference design, it will ship in a metal suitcase, similar to the one AMD used to ship samples to reviewers.

When it comes to the Radeon R9 295X2, there is not much that AMD AIB partner can do in order to differentiate its own version from the competition as all R9 295X2 graphics cards will be based on AMD's reference design with Project Hydra cooler. Nevertheless, Sapphire one will certainly stand out on any retail shelf as the company has decided to ship its own Radeon R9 295X2 in a metal suitcase, rather than a simple box.

The rest of the Sapphire R9 295X2 graphics card will be pretty much the same, except for some Sapphire stickers on the cooling system. In case you missed it, the Radeon R9 295X2 is based on two 28nm Hawaii XT GPUs with 2816 Stream Processors per GPU, works at 1018MHz for each of the GPUs and comes with total of 8GB (4GB per GPU) of GDDR5 memory paired up with a dual 512-bit memory interface and clocked at 5.0GHz.

Currently, there is no word on the availability date but Sapphire's R9 295X2 should stick to US $1,499 price tag, despite the metal suitcase. 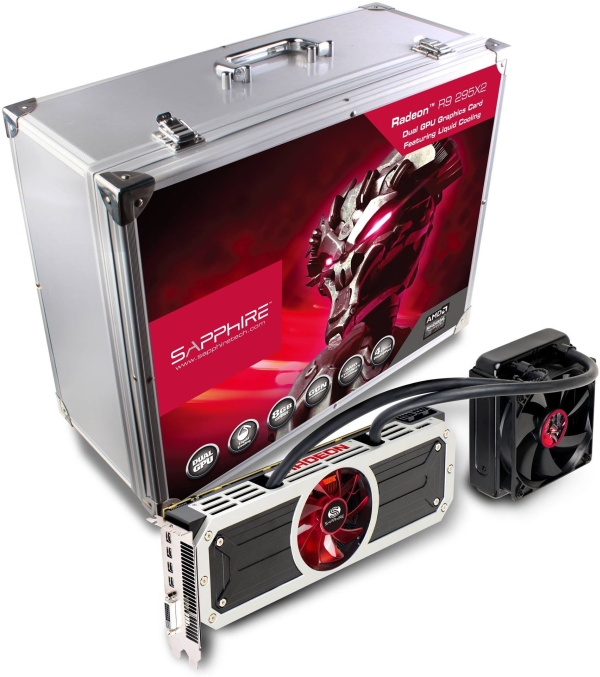