Although it was pixellized in its early form back in January, Powercolor has now officially showcased its yet to be released Radeon HD 7970 Vortex II graphics card.

Packing a custom PCB and Powercolor's Vortex II cooler, the new card is said to be factory overclocked to 1100MHz for the GPU. The memory will also be factory overclocked but the final clock has yet to be decided. Of course, since it is based on the Tahiti XT GPU, the Powercolor Radeon HD 7970 Vortex II packs 2048 stream processors packed in 32 GCN Compute Units and features 3GB of GDDR5 memory paired up with a 384-bit wide memory interface.

The main feature of the card is its Vortex II cooler that gives users an ability to choose between higher airflow or lower noise by simply pulling those two fans in or out. The massive heatsink below the fans is connected to the GPU via four 8mm nickel-plated copper heatpipes.

Computerbase.de had a chance to grab a few shots of the card at Cebit show and you can check out the rest of the pictures here. 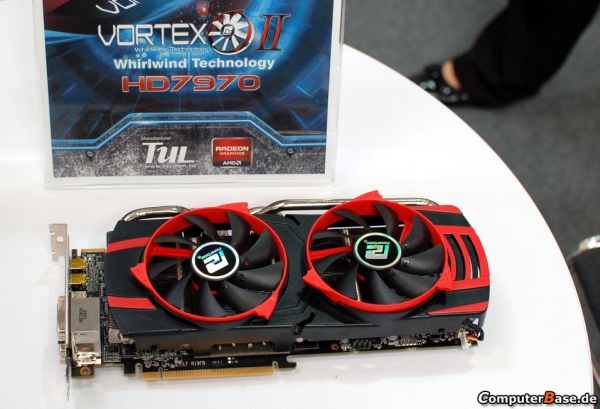 Last modified on 07 March 2012
Rate this item
(0 votes)
Tagged under
More in this category: « MSI shows its HD 7970 Lightning at Cebit AMD rolls out Catalyst 12.2 WHQL driver »
back to top