The Radeon HD 7970 day is finally upon us and chosen members of press have already published their own reviews. Consumers around the net and most reviewers do agree that the card is indeed a new highest performing single-GPU card but also that it should have launched with a lower price tag.

As far as the specs go, the new Radeon HD 7970 is based on AMD's new 28nm GCN architecture Tahiti GPU with a total of 4.31 billion transistors, 2048 shader units, 32 ROPs and 3072MB of memory paired up with a 384-bit memory interface. The GPU ended up clocked at 925MHz while memory works at 1375MHz (5.5GHz). As far as the product positioning goes, performance and price-wise, the new Radeon HD 7970 is placed between Nvidia's flagship single-GPU GTX 580 card and AMD's dual-GPU Radeon HD 6990 card. 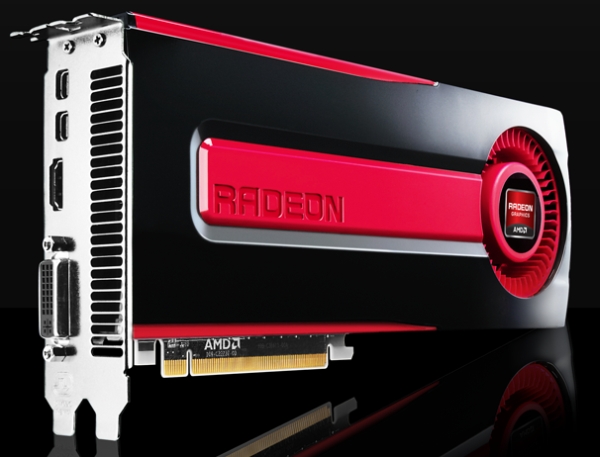 The main change is in the actual architecture as in addition to the new 28nm manufacturing process, AMD has introduced a new Graphics Core Next architecture with its Radeon HD 7000 series. The biggest change is that this time around RROPs aren't directly linked to the memory interface, thus the 32 ROPs/384-bit is possible. 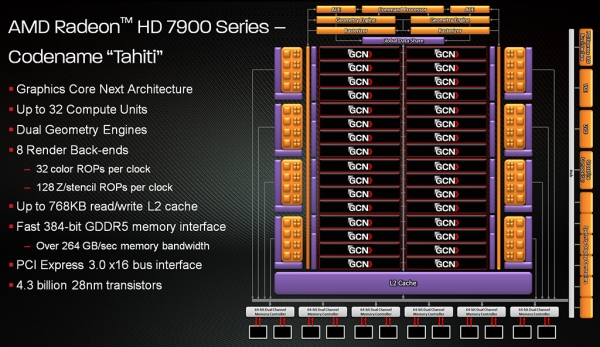 The GPU is now arranged in so called GCN Compute Units that feature both scalar co-processor and vector unit, can execute instructions from multipe kernels at once and use non-VLIW instruction set, which leads to much more performance per millimeter square of GPU die. 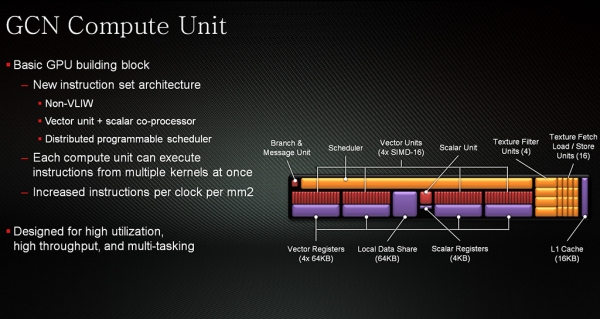 AMD's Radeon HD 7970 aslo brings a new generation of the Tessellation unit. It packs two geometry engines with two gen 9 Tesselators that should bring up to 4x throughput when compared to the HD 6900 series. 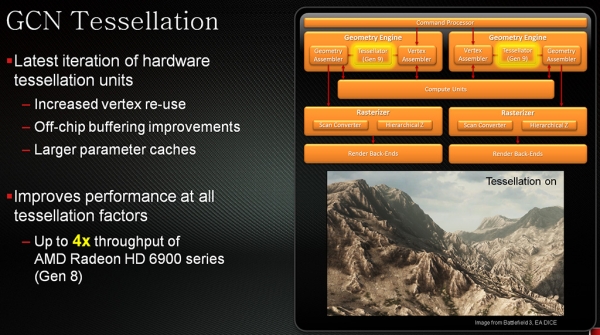 Another good part is the performance per Watt, as currently HD 7970 is really good considering that it pumps out a lot of performance at TDP levels that are similar to the HD 6970 and thanks to ZeroCore, idle TDP is incredibly low.

As far as the performance goes the HD 7970 is anywhere between 30 to 60 percent faster when compared to the HD 6970, depending on which games and at which resolution are you looking at. The HD 7970 also really shines when pushed at higher resolutions, and is currently the only single-GPU card that pushes playable FPS at high resolution and high settings in some of the new game titles. Of course, Eyefinity and multi-display gaming is still reserved for enthusiasts and that's exactly what this card is all about.

The things get tricky when it comes to GTX 580. Price-wise, the GTX 580 is around US $50 cheaper, as the HD 7970 is launched with a US $549.99 price tag. The Radeon ends up about 15 to 25 percent faster, again depending on the game and the resolution. One can't forget that the card is indeed faster, but we aren't sure that these prices will be the same for long but we are saving those price comparisons for another article. We believe Nvidia will have no choice but to drop GTX 580 prices soon.

In the end, it is simply a matter of choice, the HD 7970 is definitely a good card. You get a lower TDP at highest possible single-GPU performance. The Radeon HD 7970 could be a great card but at US $549.99, we must agree that price is a bit steep, and honestly we can't blame AMD as it is indeed faster than GTX 580 and priced accordingly.