Since there will be no new GPUs from Nvidia until next year, EVGA decided to announce its own custom card with two GTX 560 Ti GPUs on a single PCB, the EVGA GTX 560 Ti 2Win.

The card is cooled by a custom triple fan cooler that is probably more than enough to keep the both GPUs well cooled. In order to keep both GPUs well fed with power, the card requiers two 8-pin PCI-Express power connectors. The I/O part features three DVI and one mini-HDMI outputs.

The new Geforce GTX 560 Ti 2Win also features a single SLI connector in case someone wants to pair two of these cards for some quad-SLI fun, but according to first reviews, it appears that the connector itself isn't functional due to the fact that Nvidia allows quad-SLI only on its high-end parts.

According to EVGA, the card should end up around 20 percent faster than the GTX 580 (Unigine benchmark) but on the other hand it is also more expensive than the GTX 580. The card is currently available with a price tag set at US $519.99 while you can find EVGA's own GTX 580 for around US $499.99. 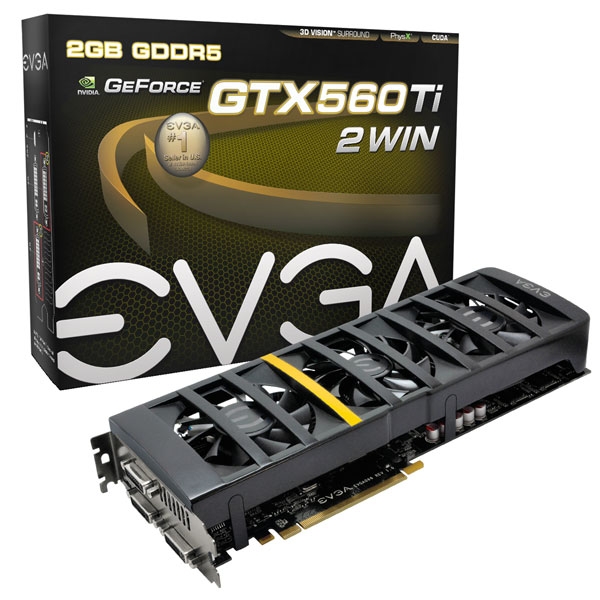