Vapor-X and FleX on the same card


Sapphire has let loose yet another card that will be a part of its HD 6900 series lineup, the Sapphire Radeon HD 6970 Battlefield 3 Special Edition. Obviously bundled with a Battlefield 3 title, the new card will feature both Sapphire's Flex technology and its praised Vapor-X cooler.

The new HD 6970 from Sapphire still has 1536 Stream Processors and works at 880MHz for the GPU and 5500MHz for 2GB of GDDR5 memory paired up with a 256-bit memory interface. In order to make this card a bit more interesting, Sapphire has also included the dual-BIOS switch that pushes the GPU clock up to 930MHz.

As noted, the card features Sapphire's FleX technology, which means that you'll be able to hook it up to three DVI monitors (third via supplied HDMI to DVI cable) for some Eyefinity fun, and all without those special adapters. This time around, Sapphire has decided to use its, quite well famous, dual-slot Vapor-X cooler that should keep the card well cooled inside mostly any case.

The card features two DVI, HDMI and two mini Displayport outputs and, as noted, will be shipped bundled with Dice's Battlefield 3 title. Unfortunately, the price or the actual availability date haven't been mentioned, but we'll keep an eye out for this one. 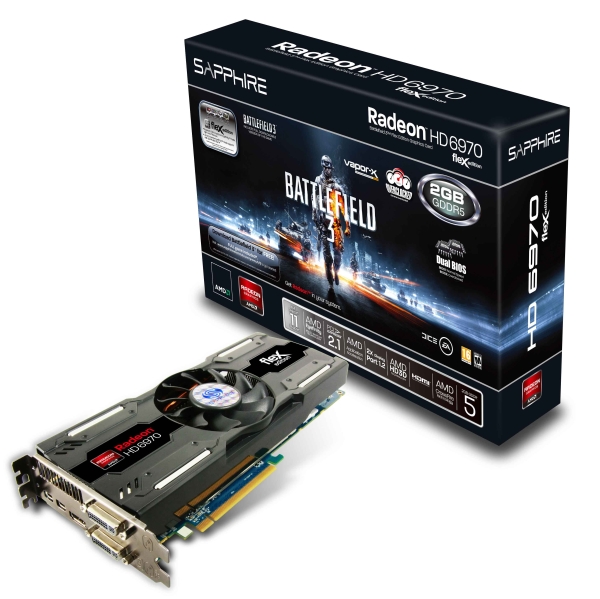