In addition to a bunch of new devices that Asus is going to show next week at Computex 2011, it appears that there will be some novelties in the graphics card department as well - the new dual-GPU Mars II limited edition card and the Matrix GTX 580.

Although it wasn't pixellized, the leaked specs suggest the new Mars II card will feature a 19-phase VRM with Super Alloy Power technology, new GPU Tweak overclocking UI and "an exclusive DirectCU cooling" with dual fan design that should keep the two GF110 GPUs running cool. The precise clocks for this one haven't been revealed but we are quite sure that Asus is holding back in order to keep some exclusivity for the Computex show.

A bit less exclusive, but equally as interesting is the upcoming Matrix GTX 580, creme of the crop when it comes to GTX 580 GPU from Asus. This one will be available in two versions, one at reference clocks and one with factory overclocking and will also feature a 19-phase VRM and a triple-slot, dual-fan DirectCU II cooler. As you would expect from a card designed for overclocking, it comes with voltage read points, Super Alloy components athe same new GPU Tweak overclocking UI.

You can find more over at pctuning.tyden.cz. 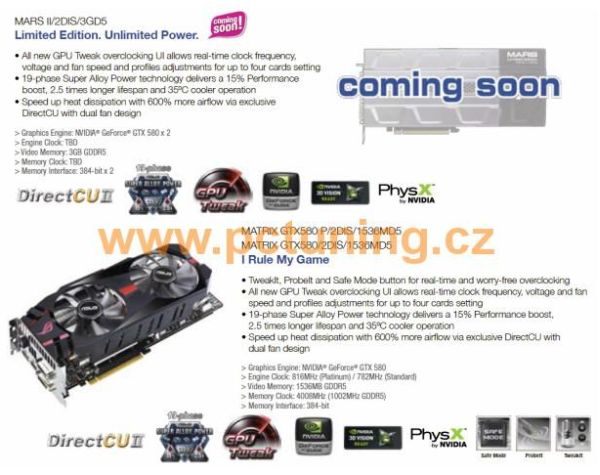