To further fill up its own PCS+ series Powercolor has announced yet another Cayman based card, the HD 6970 PCS+. Featuring a dual slot, dual fan cooler, the new HD 6970 will also come with a factory overclock, just as you would expect from a card in the PCS+ series.

The new HD 6970 PCS+ is based on, now quite well known, 40nm Cayman GPU with 1536 Stream Processors and works at 940MHz for the GPU and comes with 2GB of GDDR5 memory clocked at 5700MHz and paired up with a 256-bit memory interface. The non-reference cooler on the HD 6970 PCS+ comes with three 8mm copper heatpipes, two 92mm fans and takes up two slots. According to Powercolor, this cooler should keep the card up to 20 percent cooler than the reference one.

The backplate features two DVI, an HDMI and two mini DisplayPort outputs for some Eyefinity fun and the card will be available in two versions, with or without the Call of Duty: Modern Warfare 2 bundle. Unfortunately, the price or the availability date haven't been announced. 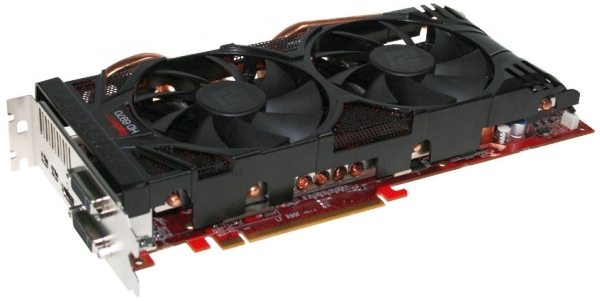