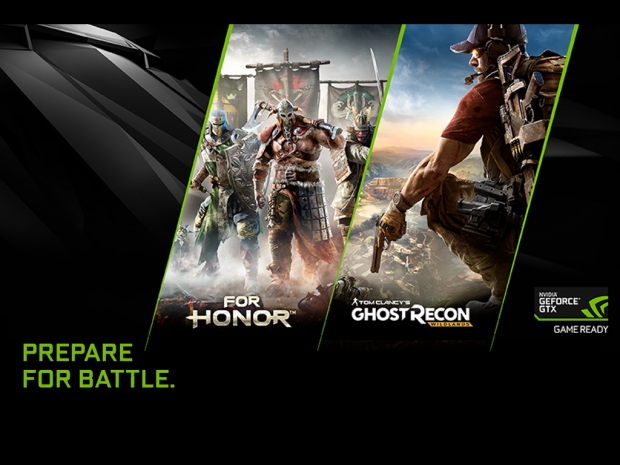 Nvidia has launched the  "Prepare For Battle" bundle offer that will include some hot new games for those that buy the Geforce GTX 1080 or GTX 1070 graphics cards, as well as systems or notebooks equipped with those GPUs.

Those that buy either the Geforce GTX 1080 or Geforce GTX 1070, or any desktop or notebook system with those GPUs will have an option to pick a free For Honor or Tom Clancy’s Ghost Recon Wildlands game.

Although the bundle offer is available from today, those that buy any of that hardware will have to wait a bit since both of these games launches later. To be precise, For Honor launches on February 14th while Tom Clancy’s Ghost Recon Wildlands is scheduled to launch on March 7th.

According to details provided by Nvidia, the bundle is limited to certain retail/e-tail partners, including some of the most famous ones like Newegg.com, Amazon.com, NCIX.com, Microcenter.com and others in North America, as well as Overclockers.co.uk, Amazon.co.uk, Scan.co.uk and other in the UK and all other in the rest of the Europe, so it would be wise to check them out if you are shopping for any of those graphics cards.

Nvidia was keen to note that both of these games support a number of Nvidia GameWorks effects and technologies, and judging by the earlier released system requirements, those with weaker systems will need any help they can get. Ubisoft's For Honor needs at least GTX 1060 or RX 470 in order to get to 1080p@60FPS.

You can check out Nvidia's dedicated Prepare For Battle bundle landing page for the list of eligible retailers/e-tailers and system builders.

Last modified on 31 January 2017
Rate this item
(0 votes)
Tagged under
More in this category: « Fallout 4 needs a supercomputer Sniper Elite 4 gets new gameplay trailer »
back to top