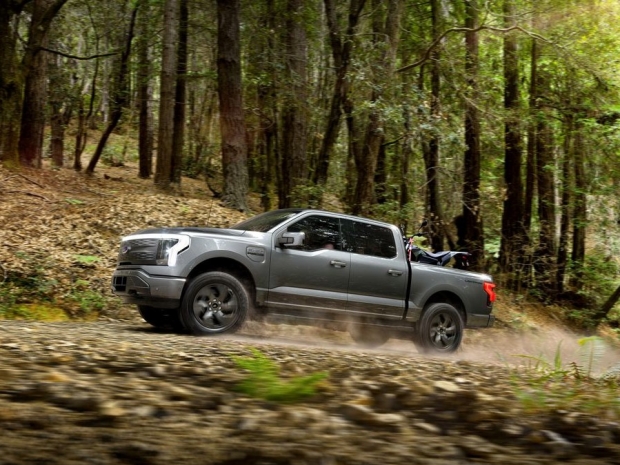 Carmaker Ford unveiled its all-electric pickup truck that is a critical piece of the company's $22 billion investment into electrification.

Dubbed the F-150 Lightning it is supposed to do everything that its gas-powered counterpart the best-selling vehicle in North America as well as new benefits that come from going electric.

So, all the numbers for torque, performance, towing capability and the general layout has to meet the needs of its customers, many of whom use it for commercial purposes.

The standard battery range truck delivers a targeted 426 horsepower and 775 pound-feet of torque. The F-150 Lightning equipped with the extended-range battery helps push the horsepower to 563 (or 420 kW) and has the same torque, which Ford says is the most of any F-150 ever.

The vehicle's battery has a targeted range of 230 miles in the standard and pops up to 300 miles in the extended version. It is not clear if this range will be affected by having to pull anything.

Ford notes that the new frame on the truck uses the strongest steel ever put in an F-150 frame and supports a maximum 2,000-pound payload and up to 10,000-pound towing capacity.

Other features include a 15.5-inch infotainment system, support for Ford's hands-free driving feature called Blue Cruise, and 9.6 kW of backup power, which the company says can provide energy to a home during a blackout for up to 10 days.

It looks like Ford has delivered on the torque and power, while keeping the same cab and bed dimensions as its gas counterpart but it will not be certain if the US will buy it until it comes to market in spring 2022.

The F-150 Lightning will be offered in four trims, which includes the base, XLT, Lariat and Platinum series, and two battery options.

The truck, which has an aluminium alloy body, is powered by two in-board electric motors, comes standard with four-wheel drive, and has an independent rear suspension.

Ford is only releasing two prices. The base version will be priced at $39,974 before any federal or state tax credits, while the mid-series XLT model will start at $52,974.

Last modified on 20 May 2021
Rate this item
(0 votes)
Tagged under
More in this category: « Spain spending billions to push electric cars Europe to get flying taxis by 2024 »
back to top