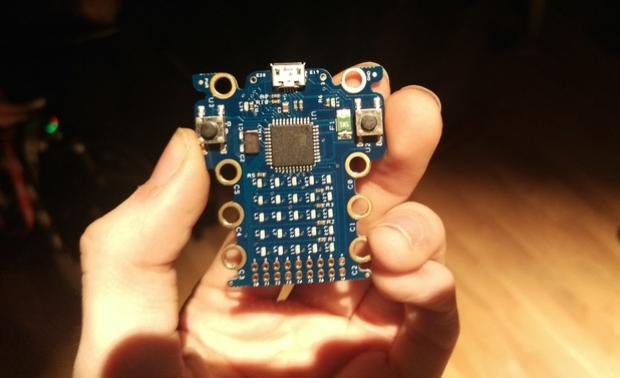 The BBC has shown the final design of its Micro Bit educationally-targeted microcontroller.

Dubbed micro:bit the design will be released under an open source licence.

Micro:bit was first talked about in March, and was the BBC's first move into producing computing hardware since its partnership with Acorn Computers.

The micro:bit is to be supported with a range of programming from the broadcaster including web content, lesson plans, and TV shows themed around learning to program using the diminutive device.

The final version features three crocodile-clip friendly GPIO connectors and power rails on one edge. On the top of the board there are three buttons and a 5x5 grid of surface-mount LEDs, while an on-board accelerometer, magnetometer, and Bluetooth chips are located on the underside, along with the ARM mbed microcontroller itself.

It measures 4x5cm and described as a 'companion' to other boards including the Arduino, Raspberry Pi, and Intel's Galileo, the micro:bit is to be produced in a range of colours to help capture children's interest.

Sinead Rocks, head of BBC Learning, of the initiative said that it is the computing equivalent of giving kids paint brushes with no experience,

"The BBC micro:bit is all about young people learning to express themselves digitally, and it's their device to own. It's our most ambitious education initiative for 30 years, and as the micro:bit is able to connect to everything from mobile phones to plant pots and Raspberry Pis, this could be for the internet-of-things what the BBC Micro was to the British gaming industry."

Free micro:bits have been earmarked for launch in October, and will be provided to all Year 7 pupils in the UK without charge - and will be owned by the pupils themselves, not their schools. A commercial launch at an as-yet unspecified price has been scheduled to follow, with no firm date yet available.

Rate this item
(2 votes)
Tagged under
More in this category: « ECS walks away from motherboards Motherboard sales slip »
back to top