ASRock obviously didn’t get AMD’s AM1 memo, so it has joined Biostar in releasing a fully integrated mini-ITX board with an A4-5000 SoC.

The ASRock QC5000-ITX/WiFi is listed in Europe for €95 which doesn’t make it very cheap. Still, this is not the official price, there’s just a few listings out there so the actual price could be somewhat lower.

The ASRock QC5000 is a strange beast

The board features a tiny aluminium heatsink with an equally tiny fan. It has two DDR3 slots and a PCIe 2.0 x16 slot. It also has on board b/g/n WiFi, USB 3.0, SATA 6Gbps, HDMI, Display Port, VGA and DVI-D.

Compared to the Biostar A68N it has a couple of shortcomings, active cooling being the most glaring one. The Biostar board does not feature WiFi, but then again ASRock’s implementation leaves much to be desired, as it’s just a b/g/n compatible PCIe Mini Card (most manufacturers have moved on to a/b/g/n/ac modules with Bluetooth 4.0 on the side). 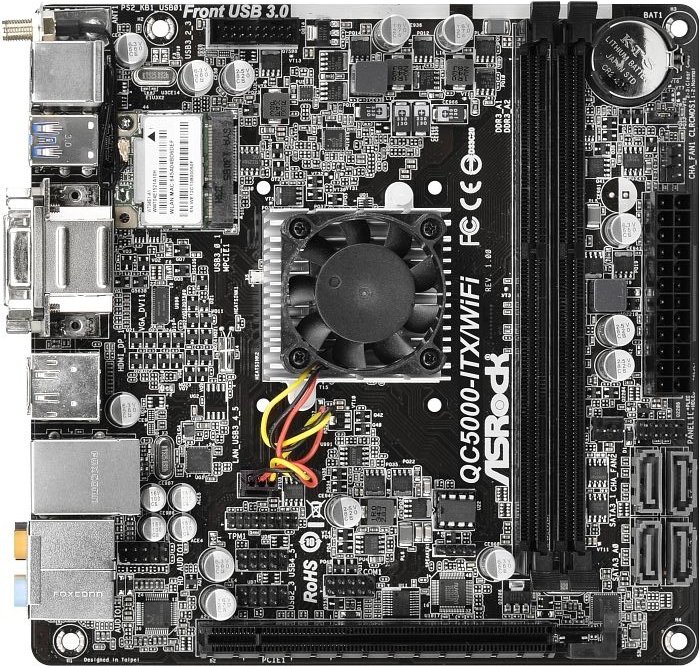 The price is another problem, but then again the €95 price tag is not official, so we can’t pass judgment. An AM1 board with a somewhat faster, socketed Athlon 5350 would end up cheaper – leaving you with enough cash to get a WiFi/BT dongle.

Why are motherboard makers even bothering?

We are somewhat baffled by ASRock’s and Biostar’s decisions to roll out A4-5000 boards in the first place. The AM1 platform is here and it is a bit more flexible. However, the A4-5000 has a lower TDP (15W vs. 25W for AM1 parts). Biostar’s implementation makes a bit more sense, as it features a passive, low-profile cooler, making it suitable for HTPCs and other kit that needs to be as quiet as possible.

As if AM1 wasn’t enough, Beema is finally out and it’s already shipping. However, we suspect Beema will not show up on any mITX gear anytime soon. Kabini launched almost a year ago and we’re just starting to see the first desktop products, either in the form of AM1 boards and socketed chips, or fully integrated A4-5000 boards.

We still don’t know much about AMD’s plans for desktop parts based on the Puma+ core, but there is some logic to this. Production of the A4-5000 is winding down in favour of new Beema parts, so vendors might be getting them on the cheap and using them in mITX boards.

As for AM1, Beema and Mullins derive most of their performance gains from superior thermals rather than architecture tweaks. With a 25W limit for AM1 parts, these gains aren’t very important. The AM1 platform allows AMD to reuse somewhat older designs, trading efficiency for consumption. Making some cash on products that would otherwise be phased out is just an added bonus for AMD.

In other words, if you’re waiting for Beema AM1 parts, don’t hold your breath.

Last modified on 01 May 2014
Rate this item
(1 Vote)
Tagged under
More in this category: « MSI sneaks Hydra onto its AMD board Intel prepares DDR3 Atom desktop board »
back to top