Forgets eSATA in the process

Zotac has now joined the game, with an A75-based motherboard with WiFi. The A75-ITX WiFi B Series features a single PCIe x16 slot, 1 PCIe Mini Card (which is taken up by the WiFi module), two DDR3 slots, HDMI, DVI, six USB 3.0 ports, dual gigabit LAN and Bluetooth 4.0. For some reason Zotac seems to have omitted eSATA, which tends to come in handy on cramped ITX systems. However, lack of eSATA connectivity is hardly a deal breaker.

There is still no word on availability, but the board is priced at €108 in Austria and £90 in Britain. This makes it one of the pricier FM2 ITX boards around, but then again it has WiFi out of the box, which isn’t the case with other boards. 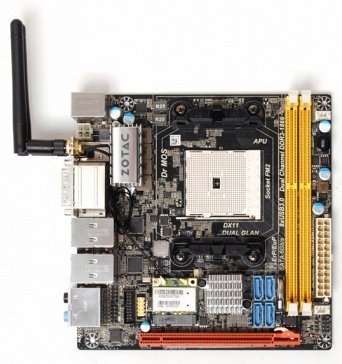 Rate this item
(0 votes)
Tagged under
More in this category: « ECS releases Haswell motherboard specs Intel to ditch motherboard business »
back to top