In its final form


The Lost Swede from VR-Zone managed to get his hands on what appears to be a picture of Sapphire's upcoming Pure Platinum Z77 motherboard in its final form. Many other motherboards based on Intel's upcoming 7-series chipset has already found its way online and it looks like Sapphire will be present during launch with at least three different models.

In addition to the already pixellized and detailed Pure Black Z77 and the Pure Platinum Z68 released a while back, Sapphire's Pure Platinum Z77 is a bit different and uses different design, which by the way ends up to be much better than the previous one.

The general PCB layout has changed, as well as the design of the heatsink covering the motherboard VRM. As far as the specs are concerned, we are looking at a motherboard based on Intel's Z77 chipset with a total of four PCI-Express x16 slots that should end up working in x8, x4, x4, x4 mode. In addition to the four PCI-E x16 ones, Sapphire also included two PCI-Express x1 ports. The new Sapphire Pure Platinum Z77 also features dual Ethernet (with Killer NIC E2200), six SATA ports, four USB 3.0 and bunch of USB 2.0 ports, 7.1-channel audio, HDMI, DisplayPort, DVI and D-Sub outputs, debug LED, voltage check points, power, reset and clear CMOS buttons and a BIOS switch.

The new Sapphire Pure Platinum Z77 looks like a solid product and although we would have a thing or two to say about the color scheme, we'll hold our horses until we see an official launch and some reviews. 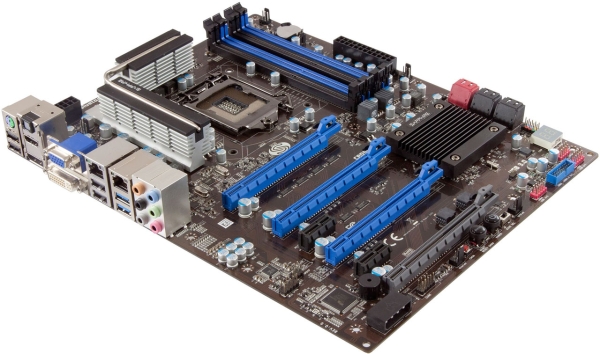