Packed with features including Thunderbolt


Cebit's showfloor is filled with Z77 based motherboards, and EVGA is no exception. The company decided to show its own version that will probably be ready for Ivy Bridge launch next month.

Although it is just a sneak peak, the picture suggests it's a high-end LGA 1155 motherboard. EVGA didn't shed any details regarding the new motherboard and we don't even have a name to go with it but as you can see from the picture below, the LGA 1155 socket motherboard features 10-phase VRM, four DDR3 memory slots, a total of five PCI-Express x16 slots and a lot of features including the Thunderbolt port seen on other high-end 7-series motherboards at Cebit show.

The rest of the features include an angled 24-pin power connector, two 8-pin CPU power connectors, two 6-pin PCI-Express power connectors to provide additional power for the GPUs, four SATA 6Gbps and four SATA 3Gbps ports. The board comes with Gigabit Ethernet, on board debug LED, power, reset and clear CMOS buttons, PCI-Express disable switches and a bunch of USB 3.0 and USB 2.0 ports, all on a instantly recognizable black/red color scheme. There is also the PCI-Express bridge chip that most likely comes from PLX.

Of course, no other details have been given but we are sure that EVGA will spill the beans pretty soon. 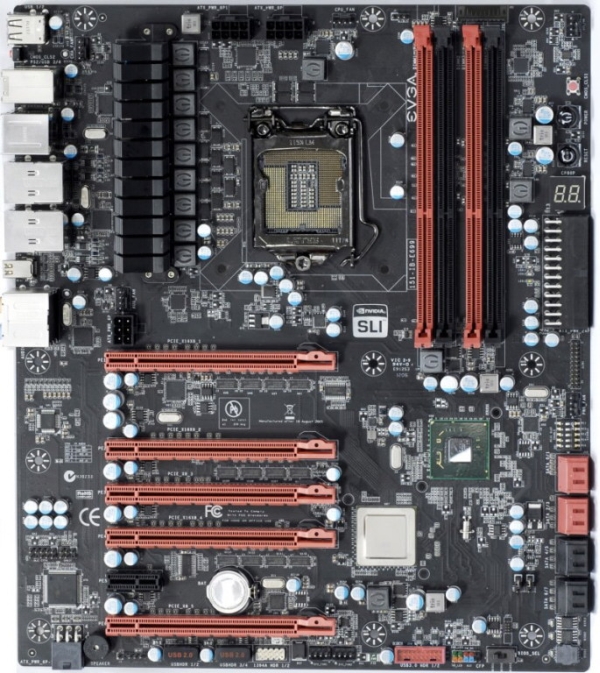