AI to create a "robolution". Ugh 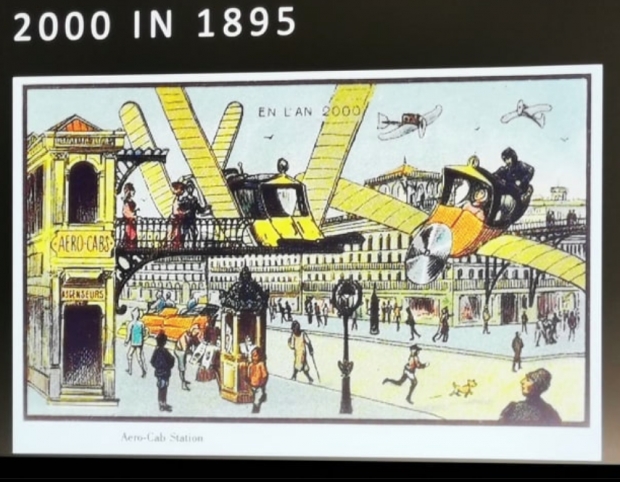 Opinion: If you want a robolution, coin another neologism

Talking about AI and “robolution”, yeah really, a French MP delivered a speech at Huawei's Paris gig today which will compel your or repel you, according to your inclination and degree of latitude

Bruno Bonnell said he coined the term “robolution”. At Fudzilla we hope the neologism doesn't catch on.

He showed a pic from 1895 that forecast what life would be like in 2000. AI, he said, is beginning to transform the planet (illustrated). It takes a long time, said Bonnell, for people to change their habits. AI lets individuals see more – one example is people using their smartphones to plot a route in a car by showing maps. That happens very fast. “AI gives you superpowers”, he claimed. “You see more”, but you can make your own decisions.

“We know that if you are limiting AI, you're on the wrong path.” He said since the beginning of time people have used tools and were developed on the basis of human capacities.

In the health sector, people trust their doctors with she or he making a diagnosis based on her or his own memory and judgement. Health AI can help diagnose problems faster because a machine sees things the human eye can't see. Surgery is augmented by AI, but people need to trust a machine to do the cutting. The phrase "augmented intelligence" rather than "artificial intelligence" has taken root because it implies it helps people rather than replace them.

Personally, having suffered not 1,000 cuts, but many during the course of my life, I'd rather trust a real person to make the incisions and the decisions.

Decisions will be made in business by AI processes too, said Bonnell. AI is already widely used in the food business.

Although Bonnell describes AI as augmented intelligence rather than artificial intelligence, he didn't talk about the jobs that will be affected by the robot world. And he didn't even touch on human emotion which, after all, drives many of our decisions.  Perhaps the boffins will get to a stage where they can simulate emotions, but then that's what psychopaths do.

Last modified on 05 November 2019
Rate this item
(1 Vote)
Tagged under
More in this category: « AI will change all jobs US could be eclipsed by Chinese on AI »
back to top