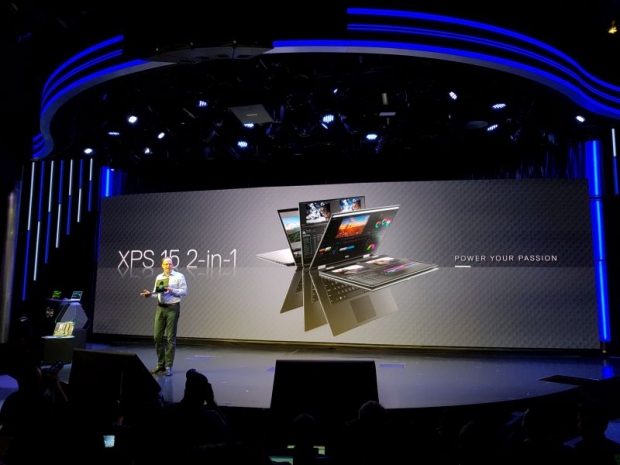 It is not every day that you have a chance to chat with the general manager of Alienware and the chief man in charge for the XPS units. Frank Azor, the GM of Alienware and XPS, as well as Donnie Oliphant, Sr. Director and General Manager XPS and Dell Gaming helped us understand the choices behind one of the highly anticipated XPS 15 2in1 2018 notebooks.

Of course, apart from the super sexy white and woven XPS 13 that launched at CES, Dell is preparing the XPS 15 powered by Intel’s first ever processor that is using the EMIB and Radeon Vega on board. Intel CODENAME G, makes a lot of sense. Dell managed to reduce the motherboard footprint by 50 percent compared to the previous 2017 XPS 15. This simply makes more space for the battery and lets you create a much slimmer machine. Needless to say, the bigger battery means it will run a stretch longer and the smaller PCB simplifies the motherboard design.

Raja Koduri’s team at RTG cooked this up and now Raja, onboard at Intel is serving its happy customers like Dell, HP and - probably later - Apple with the most innovative CPU + HMB 2 + interconnect + GPU on the same PCB design in a while.

Frank Azor and Donnie Oliphant helped us understand the XPS 15 a bit better and explained some choices in the notebook design. Donnie showed every geek’s wet dream, an actual prototype of XPS 15 with the lid opened. We had a chance to see the completely redesigned cooling solution and see the special black material called GORE. 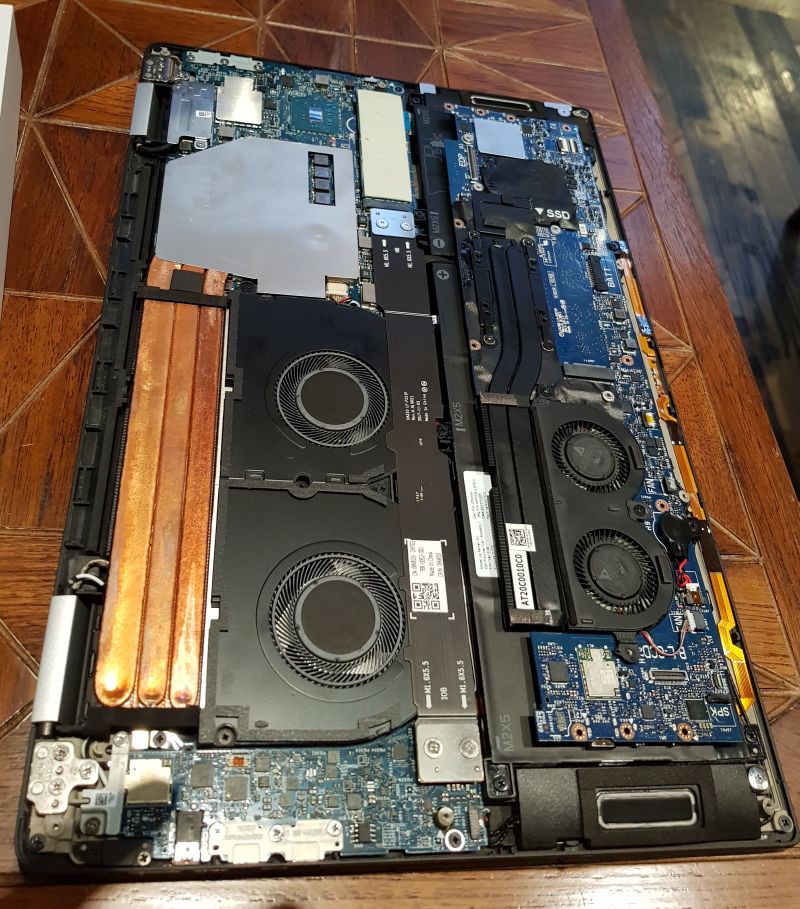 The whole point of GORE is to enable better thermal insulation and help the re-designed three heat pipe and fans keep the TDPs in line, while keeping coolers quiet and performance intact. It is all about thermal management. The 2in1 design is challenging and  thin machines are not easy to cool. The thinner you get, the harder it is to design the cooling fans, heat pipe and the rest of the cooling subsystem. The main goal is to prevent the notebook from throttling as throttling would cost you much needed performance.

The combination of the GORE Thermal Insulation and the cooling solution should get Dell XPS 15 (model number 9575) to 55 to 65 W TDP. At the time we talked with Dell, the product was still not finalized and there was some room for optimization. The final placement and size of the GORE Thermal Insulation was yet to be determined and Intel also played with the final specs at the time.

Frank made us aware that designing 2in1 cooling solutions has its own special challenges. Notebooks will never bend 180 degrees and cover the cooling vents while that is one of the key feature of the 2in1. You need to design the case and cooling with that in mind and this is exactly what Dell did for the XPS 13 2in1.

Both Frank and Donnie confirmed that this is likely to be the smallest, thinnest and the most powerful 15 inch all in one. It will definitely be the slimmest, smallest and most powerful two in one from Dell. There was a lot of attention taken on the power management that preserves the performance and keeps the laptop from throttling. Having a very slim cooling soliution with three heatpipes is more than enough to take care of the heat, and it was never noisy during our short demo. There is no doubt that I would like to spend more time with the finished machine to give a final judgement.

The processor features Radeon RX Vega M GL graphics with 4GB HBM 2 and the AMD Vega powered graphics should perform close to the 1050 GTX from Nvidia. The main difference is that the MXM or a notebook version of Geforce M GTX 1050 with GDDR5 memory is as big as Intel’s H series processor with HBM2 and Vega GPU. Frank has confirmed the 20 Vega cores for the Intel H series processor aka Kaby Lake G. It is all about footprint in this game and Nvidia clearly didn’t want to work with intel on such a solution, at least not for a product ready to ship in the first half of 2018. 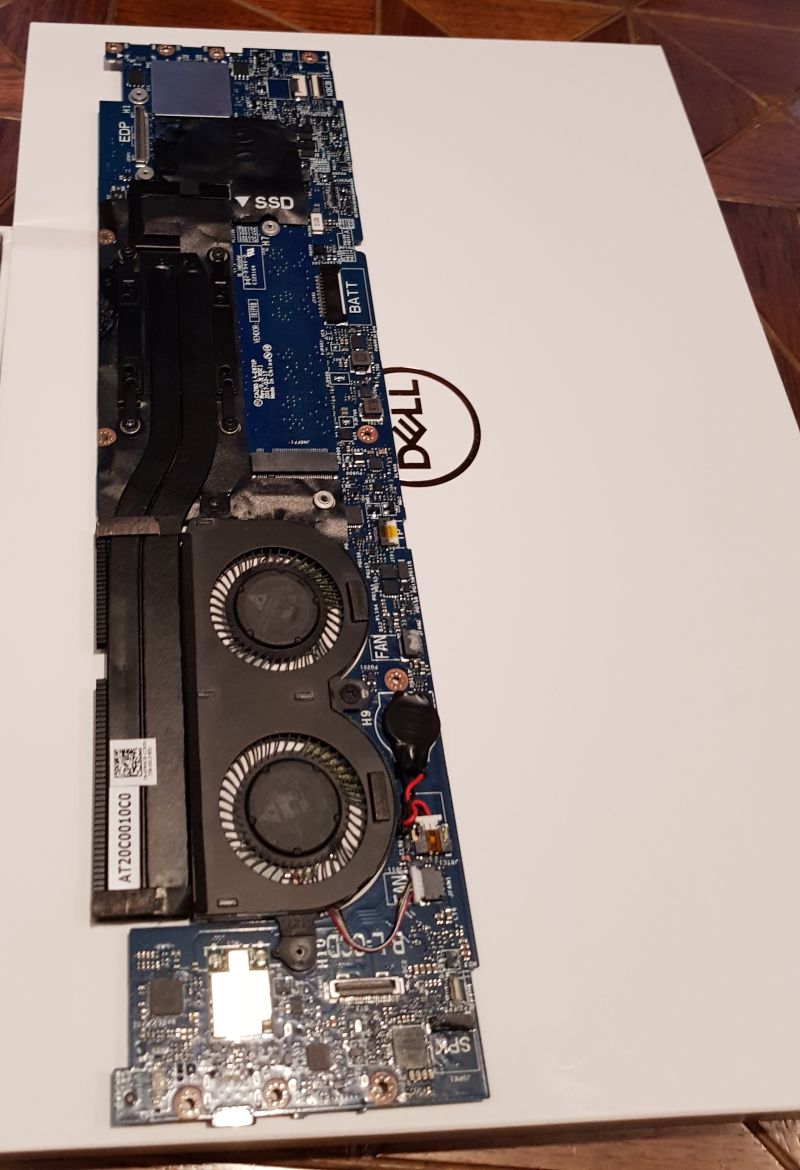 The final battery life is yet to be confirmed but with everything reduced to minimum you could get 15 hours of battery life in this 16mm high notebook. Dell is using built in 75 WHr integrated battery.

The 100 percent sRBG color space something that the prosumer really dig. This notebook is targeting video editors, youtubers, photoshop on the go and compared to any Apple solution available today, XPS 15 2018 will simply eat it alive, while being thinner and most likely have a better battery life.

In order to make it that thin, Dell also came up with Maglev keyboard. We had a chance to try it, and it works great. It enables the slimmest 2in1 while staying away from traditional mechanical keyboard switches. The keyboard is using magnet levitation and tactile feedback. This is first of its kind and probably will move in more of the Dell products in the future. Sometimes it is all about the little things and we liked the fact that dell has a magnet mount for the active pen. The pen is comfortable, precise and one great tool.

The notebook is using Killer 1435 802.11ac [2x2] + Bluetooth 4.1 Intel 8265 802.11ac [2x2] wireless for Vpro+ Bluetooth 4.1 Miracast capable. You need to have Intel solution to qualify for Vpro, that is the way it is. The XPS 15 2in1 9575 has stereo speakers professionally tuned with Waves MaxxAudio Pro, 1W x 2 = 2W total, Headset jack, Widescreen HD (720p) webcam with 4 array digital microphones and Windows Hello compliant infrared camera. Login with your face supported by Windows 10 is a really nice feature.

Overall the XPS 15 2 in 1 might be one of the most exciting 15-inch notebooks to launch in the history of computing. It has all prosumers need with the slimmest and sexiest design, great GPU in the smallest motherboard, space materials, first ever HBM 2 inside of notebook, maglev keyboard, 100 percent RGB screen and 16mm form factor. One must be excited about this machine.

We will have to wait until April / May when Dell officially starts shipping its XPS 15 2018 2in1. Now close your eyes and imagine XPS 15 in the future with Vega 7nm or Navi.