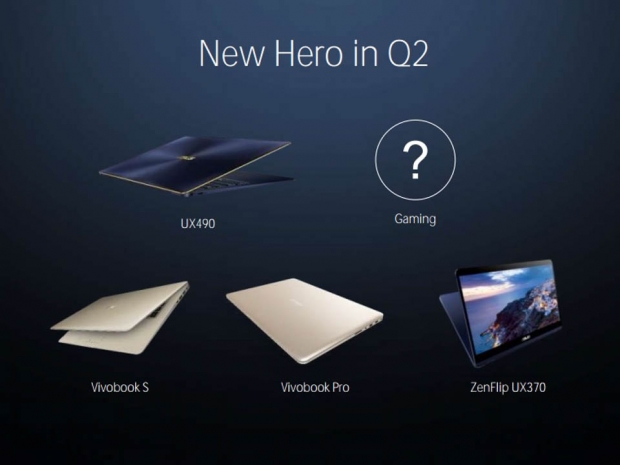 During the usual variety of product launches at Mobile World Congress next week, ASUS is preparing to release a successor to the ZenBook Flip UX360, a 2-in-1 convertible that was announced in July and re-launched in September featuring a 360-degree hinge and the choice of 6th-gen Core M processors or a 7th-gen Core i5 processor.

The product is reportedly called the ZenFlip UX370, and according to Chinese-language sources, the device will feature an even thinner chassis than its predecessor, along with the same 360-degree hinge, and a 7th-generation Intel processor of some sort. Previously, the UX360 was offered with three options, including the 4.5-watt Core M3-6Y30, Core M3 6Y54, Core M3 6Y75 and Core i5 7Y54 (Kaby Lake), along with a Full HD 1080p display or 3200x1800p display, up to 8GB of LPDDR3 memory, two USB 3.0 ports, one USB-C port, one microHDMI port, up to a 512GB SATA M.2 SSD, and a 54-watt hour battery.

As DigitalTrends pointed out, if ASUS decides to stick with the Core m3 processor family, then it will likely be using the only 7th-generation model that was released last fall, and that is the Core m3 7Y30. This is a dual-core 1GHz (2.60GHz Turbo) processor with Intel HD Graphics 615, enough to render 4K video smoothly thanks to the optimized Kaby Lake video decoding engine. Another option that the ZenFlip UX370 may include is Windows Hello functionality for enhanced login authentication.

In 2016, shipments of all ASUS 2-in-1 devices only grew by about 10 percent on the year, though according to CEO Jerry Shen, the company is aiming to increase this product segment by 40 percent in 2017. The company also notes that ultra-thin notebooks, gaming notebooks and 2-in-1 notebooks are expected to increase to 50 percent of total sales this year compared to 40 percent the previous year.

ASUS is expected to unveil the ZenFlip UX370 2-in-1 alongside other models such as the ZenBook 3 Kaby Lake refresh, Vivobook Pro and Vivobook S in Barcelona. The products are expected to become available sometime in Q2.

Last modified on 24 February 2017
Rate this item
(0 votes)
Tagged under
More in this category: « Wiston chairman says notebook industry facing a crisis Pixel laptop goes the way of the Dodo »
back to top