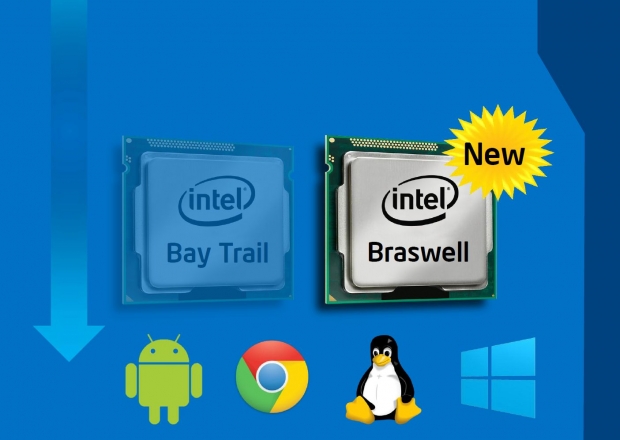 Intel's transition from 22nm to 14nm, with out-of-order architecture better known as Atom, was not a walk in the park.

Intel had to delay its next generation Atom out-of-order architecture codenamed Braswell all the way to Q3 2015 and, at that time, we expect to see the Braswell-based Pentium N3700 replacing the Bay-Trail-M BGA based N3540. Last time we mentioned Braswell, the processor was delayed to Q2 2015 and now it slipped an additional quarter.

As you can see, Braswell 14nm has a significantly lower clock and Turbo at a 6W TDP (Thermal Design Power) and 4W Scenario Design Power (SDP). Pentium N3640 Bay Trail has a 7.5W TDP and 3.5W SPD, so the TDP went significantly down but the SDP went up, just barely.

The Intel HD Graphics core also works at 400MHz base and 700MHz maximum frequency on the Braswell Pentium N3700, which is slower than the N3540 with its 313MHz base and 896MHz Turbo clock.

The Pentium N3700 supports DDR3L 1600 MHz memory, has 2MB cache and it comes in BGA packaging. The good news is that the new platform supports Chrome, Linux, Windows 7 64-bit only as well as Windows 8.1 and Windows 10 64-bit only.

There will be a few other Braswell 14nm dual- and quad-core processors that will end up branded as Celerons. The Atom brand name is gone in the notebook / Chromebook market.

Last modified on 16 February 2015
Rate this item
(5 votes)
Tagged under
More in this category: « Chromebooks with Skylake coming in Q4 2015 Braswell 14nm Atom graphics supports DirectX 12 »
back to top