Acer’s Iconia Tab A700 could be the first Android tablet with a proper HD screen, but it is still not clear when it will show up in retail.

However, at least we have some early listings to gossip about. Punters expected A700 to sell for €550 to €700, but the listings indicate that the 32GB version could end up costing a much more down to earth €479.

We wouldn’t call it a bargain, but then again, compared to other high-end Android tabs, the A700 seems to offer pretty good value for money, as most of them cost upwards of €400. The Iconia is based on Nvidia’s Tegra 3 SoC, with 1GB of RAM and 32GB of storage, at least in the listed version. 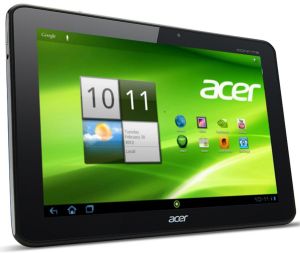 Due to the 1920x1200 screen, Acer had to go for a pretty beefy 9800mAh Li-Poly battery. We are not entirely sure, but we believe it is second only to the 11,600mAh power pack on the new iPad, so the extra resolution should not translate into poor battery life.

We still don't know when the exact launch date, but you should be able to buy the A700 by the end of the quarter.

Last modified on 18 May 2012
Rate this item
(0 votes)
Tagged under
More in this category: « Intel over-egging pudding on Ultrabooks Asus Transformer TF300 hits Europe »
back to top