MSI's Wind U270 detailed ahead of CES

AMD Brazos platform
The guys from Netbooknews managed to get a hands-on with MSI's upcoming U270 Wind 12-inch notebook at MSI's pre-CES event in Taiwan. Based on the upcoming AMD Brazos platform, the Wind U270 features a 1.6GHz Zacate E-350 APU and should pack quite a punch under its 12-inch hood.

The entire device weighs around 1.3kg and it is less than an inch thick. It has a 12.1-inch screen and, as noted, is based on AMD's Brazos platform. The Zacate E-350 APU ticks at 1.6GHz and features DirectX 11 Radeon HD 6310 graphics. The rest of the features include up to 4GB of memory, up to 500GB of HDD space, D-Sub and HDMI outputs and USB 3.0 support.

MSI will apparently implement its ECO power-saving technology. The price, availability date and the rest of the features will be left for its official unveiling at CES 2011 in January. 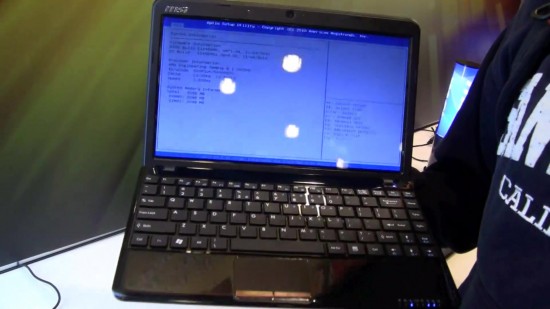