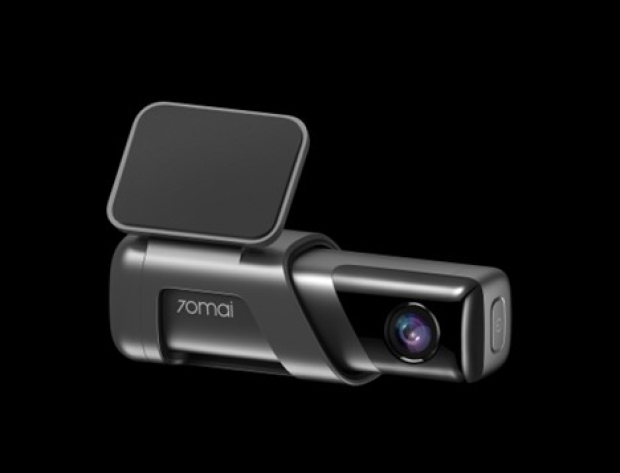 Dash cameras have been a trendy category over the last few years. Many customers use them to record their everyday drives and use the video files in case of any unexpected accidents. Insurance companies usually consider these videos in case of any accident.

The 70mai Dash Cam M500 is not just a powerful dashcam. It also acts as a smart driving assistant to support the recording. It has a few unique selling points, including excellent image quality with its 1944P resolution and High Dynamic Range (HDR) technology, with added security ensured by its parking surveillance and emergency recording. Unlike many other competitors, it also comes with integrated eMMC storage.

Some additional options include Bluetooth Tire Pressure Monitoring System extends as well as voice commands and parking protection and ADAS.

70mai dash cam M500 is a professional, smart dash cam that provides excellent image quality of 1944P high resolution, wide 170° FOV, and true 24H parking surveillance. These are extrapolated key features of the device, as this is one of the few dashcam solutions featuring a 170° field of view and F2.0 aperture. It also has a smart algorithm to enable time-lapse recording and extra innovative industry-first features of Bluetooth tire monitoring, eMMC built-in storage, and voice control. One of the special appealing features that many know about Tesla cars is the active 24-parking surveillance with time-lapse recording. After the sudden shake is detected, it can also start an emergency recording with G-sensor. 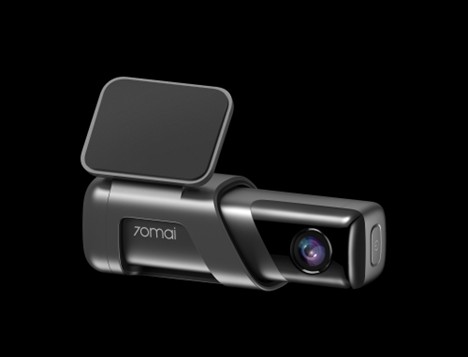 The 1944P or 2592x1944P, to be precise, is equivalent to a 5-megapixel camera, according to the 70mai that creates 2.5 times clearer than 1080PHD images. The 170 degrees of an extra wide field of view will introduce a wider viewing angle and minimize blind spots. The M500 camera also enhances low-light performance by featuring the F2.0 aperture with High Dynamic Range (HDR), letting more light through the lens and creating brighter low-light scenes. HDR imaging automatically adjusts exposure under different lighting conditions, consistently producing well-illuminated images. The HDR technology also captures details in poorly and brightly lit areas and produces evenly exposed images under high-contrast lighting.

As soon as a sudden shake is detected on a built-in G-sensor, the 70mai Dash Cam M500 automatically starts recording. It will ensure that the critical evidence of the unexpected event has been saved. Emergency videos are automatically locked in the dash cam's "Event Folder" to prevent an overwrite. The emergency recording will help drivers explain to the authorities and insurance companies what exactly happened. 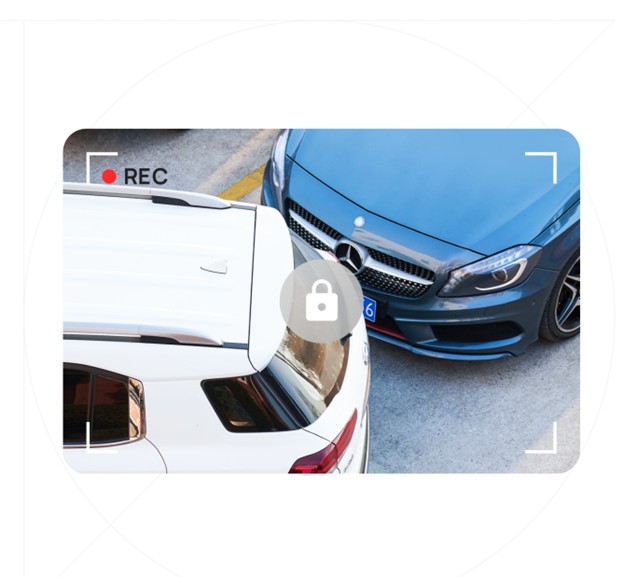 It will be activated while the vehicle is stationary. The built-in G-sensor initiates automatic recording when sudden shakes or collisions are detected. Many users know this from Tesla videos that can record break-ins, window breaks, or vandalism. 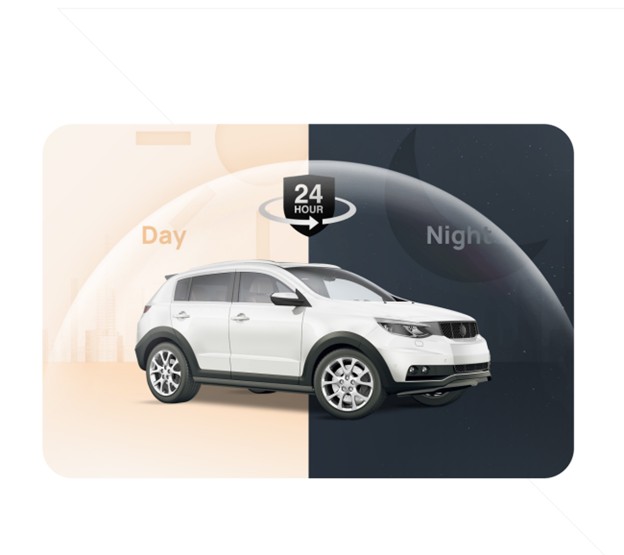 In case of an emergency video recording, the driver will be notified with a voice alert after getting back into the car and starting the camera. No connectivity option can notify you via the GSM network. All emergency parking surveillance videos will automatically save and end up locked in the "Event Folder" to prevent an overwrite.

Time-lapse has been a popular feature for a dash camera user, and it will compress 30 minutes of footage in one minute that will only use 1/30 of storage space. Hours of surveillance footage are compressed into minutes, enabling to catch an important event faster.

The 70mai Dash Cam M500 also improves position accuracy as it comes with a built-in GPS & GLONASS sensor with Route-tracking. The M500's positioning system receives signals from both GPS & GLONASS satellites, offering enhanced data accuracy. Users have access to real-time trip data, including speed and coordinates, and are able to pinpoint the exact location of an accident if one should occur. Route-tracking automatically traces your driving route, available for review in the 70mai app after each trip.

This feature will bring ADAS to some older vehicles. ADAS will ensure to track and detect surroundings and notify you of potential safety problems through real-time voice alerts. The camera supports lane departure, moving traffic, forward collision, and pedestrian collision detection. The pedestrian collision warning AI algorithm enables quick and accurate detection of pedestrians and cyclists in the same lane and gives you timely warnings to prevent accidents. 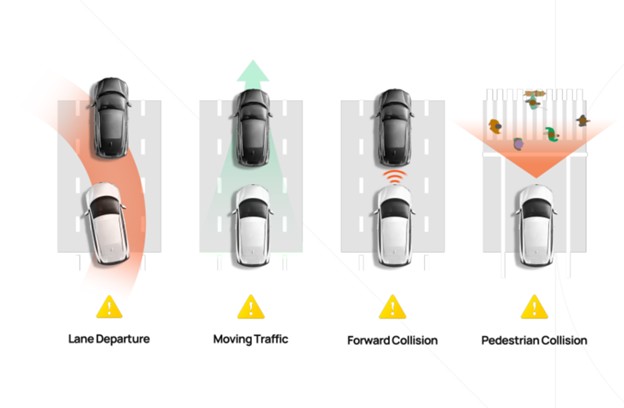 eMMC 5.1 storage with write speeds up to 150MB/s and reading speed up to 230MB/s should last much longer compared to SD & TF memory cards. eMMC will bring a stable performance to ensure that frame won't be dropped in any critical event. The 70mai Dash Cam M500 doesn't require an external SD card or additional cost. It is ready to go out of the box. Easy removal of the camera body allows one to download footage quickly on your computer. 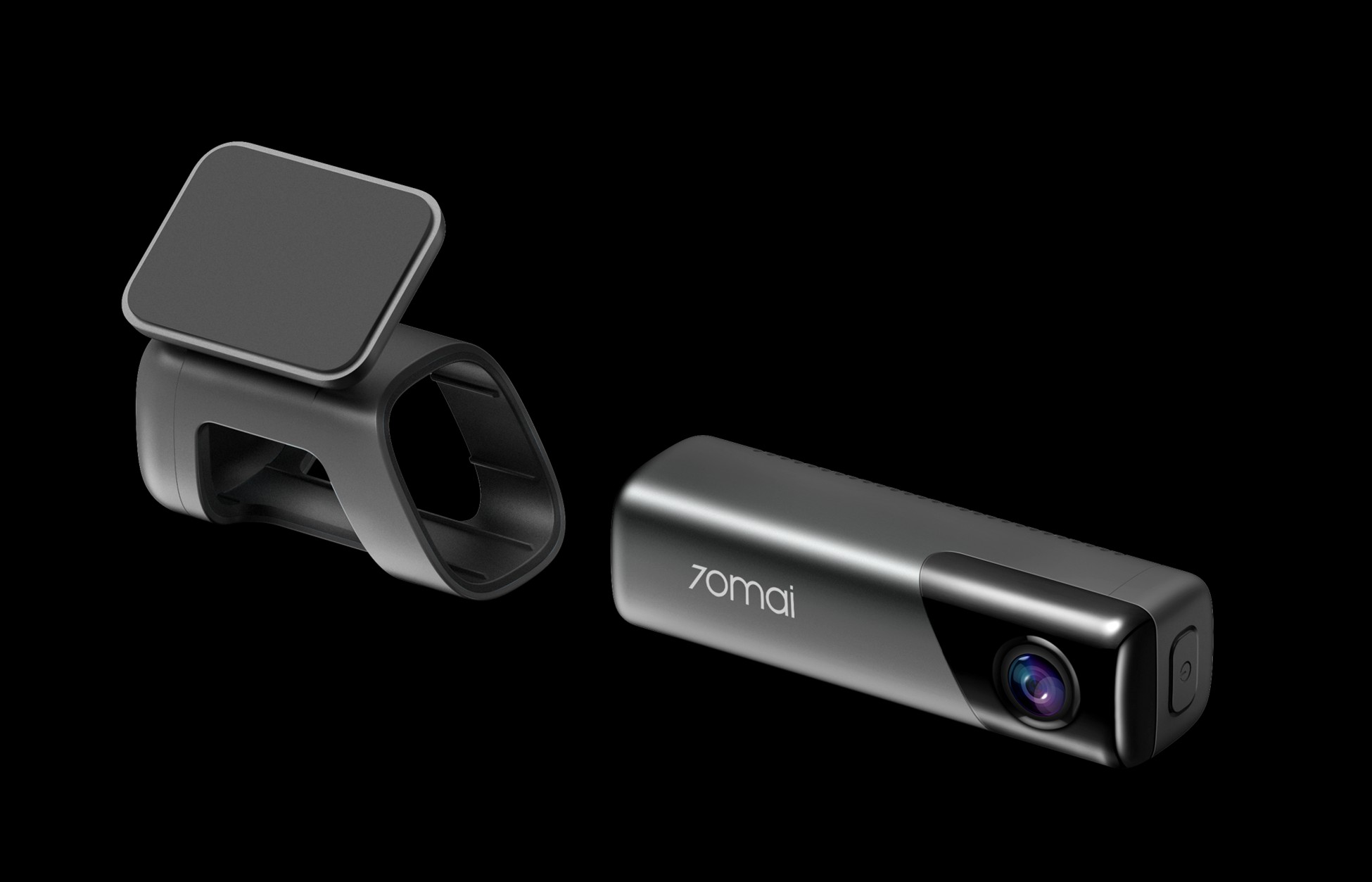 The device supports an external pressure monitor via sensors sold separately. The M500 provides voice alerts when sensors detect abnormal tire pressure. The M500 directly receives Bluetooth signals from TPMS sensors and doesn't require a receiver. The sensors are dust and water-resistant and created to measure and last long accurately.

Voice control such as take picture, or record video are enabled in English. Voice control will help you take a picture or record a video without removing your hands from the wheel.

Loop recording will prevent full memory as the new recording will automatically overwrite older footage when the memory reaches full capacity. Emergency recordings are saved separately and cannot be overwritten.

The app will connect the camera via WiFi, and it will enable come additional controls, including taking photos, viewing albums, or downloading saved footage. The app lets you manage settings such as Recording Duration (1min/2min/3min), G-Sensor Sensitivity (high/low/off), Auto OFF after Car Shuts Off (5min/10min/20min/never).

The app via phone will also offer data and effect overlay, just as you were able to see with Tesla and some other ADAS cars. Available data and effects include speed, real-time altitude, driving direction, Acceleration/deceleration, left & right turns, uphill & downhill, roll angle, Highlight of lane markings, pedestrians, traffic ahead, speed limit signs, and green lights. Data and effect overlay video effects will bring some ADAS to the older car modes via your phone.

The camera comes with three storage options 32GB, 64GB, and 128GB. The 70mai Dash Cam M500 with 128GB is available for our readers for 15 percent off the retail price here.

You can get them at a discount rate at the following links.

Last modified on 09 May 2022
Rate this item
(0 votes)
Tagged under
More in this category: « HP shows off new Chromebooks Oracle Java's popularity plummets »
back to top