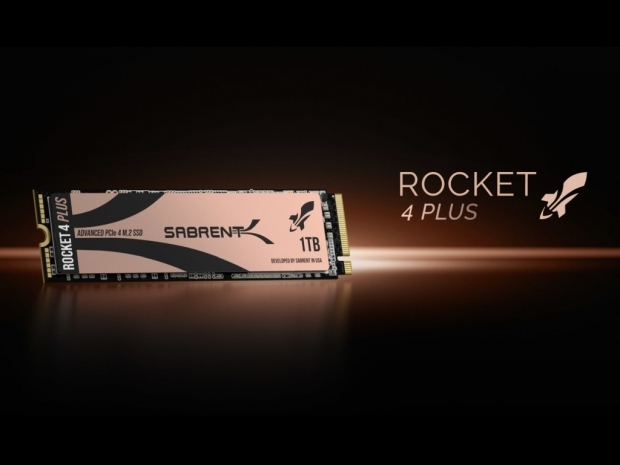 Sabrent reached out to let us know that Sabrent Rocket 4 Plus is now available in 1TB, and 2TB sizes at Amazon.com and a few other places. The drive was initially announced in September, and it holds the fastest on the market crown with 7100 MB/s read and 6600 MB/s write performance.

The Sabrent Rocket 4 Plus has dethroned the Samsung 980 Pro performance. Samsung’s best can reach 7GB/s read, but only 5 GB/s writes. The Rocket 4 Plus uses Phison’s PS5018-E18 SSD PCIe 4.0 controller that is the fastest thing existing right now and is set to run PCIe 4.0 for its money.

Since Intel is finally joining the PCIe 4.0 market in Q1 2021, market demand will undoubtedly increase.

At the announcement, back in September, Sabrent mentioned 7000 MB/s read and 6600 MB/s write speeds, and while it sounded even great back then, Sabrent slightly updated its specifications and it managed to achieve more on the read and a bit less on the write speed.

The drives might not be the cheapest, but one must realize that 2TB at $399 will buy you the fastest SSD available, and this price is just a fraction of the cost of a high-end graphics card from Nvidia or AMD. The high-end segment is never cheap. Games, creative workers, and performance enthusiasts are the target audience for these drives, and last time they sold out quickly, and they just came online for $199 for 1TB and $399 for 2TB.

The 500GB and 4TB should also be coming soon.

Last modified on 25 November 2020
Rate this item
(3 votes)
Tagged under
More in this category: « Apple security boss arrested for bribing cops for gun permits How Facebook protected Holocaust deniers »
back to top