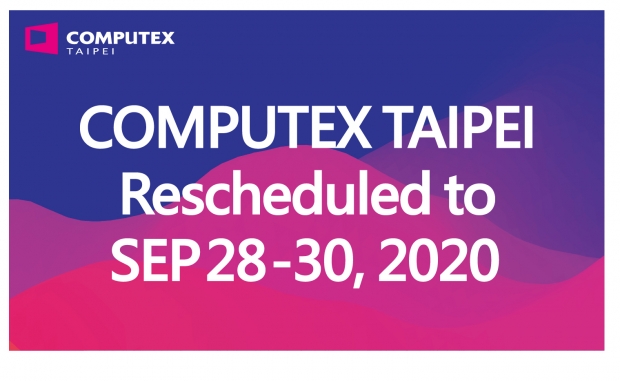 The last of the big shows, Computex 2020, has been postponed from the original date,  June 2 - 6 to September 28. Taiwan is not a hard-hit area right now, but with travel bans implemented around the world, it is unlikely that many international travellers would be able to show up in late May for the original date.

The pandemic originated  in China, but it is still massively growing across Europe and the US. The world is turning to a home office workspace, and a video conferencing business model, as most are prevented from traveling.

The organizers of Computex Taitra are using McKinsey's latest epidemic report stating that the pandemic in China and East Asia will be controlled by the beginning of the second quarter, and the epidemic situation in Europe and the United States will slow down in June. Many in Europe and the US are hoping that things will get under control before these dates, but as most of the scientists insist, it is hard to predict how things will turn.

The future Computex 2020 will take place in Taiwan Taipei Nangang Exhibition Center, Hall 2 (TaiNEX 2) from September 28 to 30, and the organizers promise a lot of news around 5G and communication, smart solutions, gaming, and InnoVEX (startups).

We had a conversation with some industry friends in early February, where they predicted that Computex would get postponed, just as it was in 2003 due to the SARS epidemic. The most important thing is to stay safe, and travel in the near future to a distant continent will remain a challenging task.

Last modified on 26 March 2020
Rate this item
(0 votes)
Tagged under
More in this category: « Gates blasts Trump in TED talk Snopes breaking over dodgy COVID-19 stories »
back to top